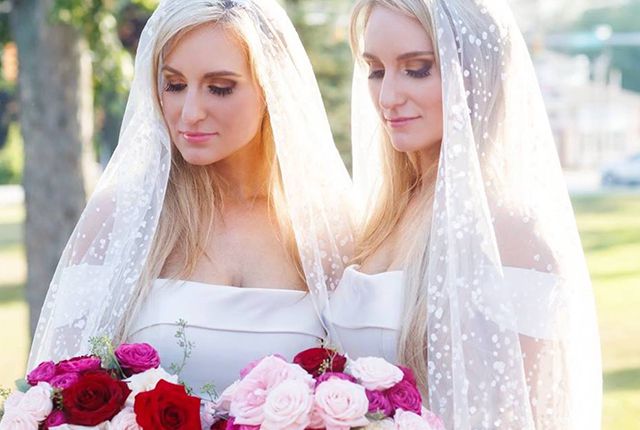 There’s no need to pay your eye doctor a visit: You’re not seeing double. Well, actually you are. Briana and Brittany thought they’d never find their soulmates. But neither did Joshua and Jeremy. Then they all found each other and these twins married twins after a twin-tastic event brought them together.

Longing For A Twin Wedding

Brittany and Briana Deane had dreamt of falling in love with identical twin brothers, and it wasn’t such a crazy idea after all, since they were identical twin sisters. And it’s not like anyone had never heard of cases were twins married twins.

They Foresaw Their Future

“Even when we were little girls I can remember being in kindergarten, knowing that that is what we saw for ourselves,” Briana told People. But the chances of finding the perfect identical match was like finding a needle in a haystack.

The Odds Were Against Them

“We knew that the chances were incredibly scarce. The stars had to align for our dreams to come true,” Brittany added. And they hoped that their twinning habits would eventually lead them to find their very own set of Prince charming twins.

Two Halves Of A Whole

The sisters considered themselves “two halves of a whole”. And they’d spent their entire lives looking alike, dressing alike, and double dating. But as they got older, their desire to find two Mr. Rights became a priority.

Briana and Britney knew that they could plan the perfect joint wedding if they put their heads together. But there was one problem with their plans. They were missing a pair of grooms.

The Deane twins had traveled from their home in Virginia to Twinsburg, Ohio for the Twins Day Festival since 2011. But they never imagined that both of their lives would end up radically altered by two handsome strangers.

"We were sitting on the bleachers and I saw just these two amazingly handsome young men that looked to be about our age," Brittany told ABC News. The twin boys were making their way across the gym, and the girls were so excited.

She Twisted Her Wrist

Brittany grabbed Briana by the wrist, "which we always do when we get excited about something," Briana shared. In seconds, she spotted the identical twin brothers that had peaked her sister’s interest.

The boys weren’t oblivious to Brittany and Briana. Both twin couples had seen each other, but neither of them made any attempts to walk up and introduce themselves, at least not right away.

On the final day of the annual festival, Brittany and Briana met the young men they had been drooling over. Their names were Josh and Jeremy, and the sisters had learned that this was their first time attending the event.

“I remember vividly the first time Brittany and I saw Josh, and Jeremy at the twins festival,” Briana told People. The moment had been so magical, that it was almost as if destiny had brought all four of them together.

Briana agreed with Brittany whole-heartedly. “I also remember the first time we all spoke the last night of the festival. It’s sort of like everything was in slow motion,” she shared with People. But they weren’t the only ones happy with the way things turned out.

Josh and Jeremy Salyers began dating the girls, which wasn’t easy at first since the boys lived in Maryland and the girls lived in Virginia, but they made it work. And eventually, they got engaged. "When we got there it turned out better than we ever expected," Josh Salyers told ABC News, regarding the engagement.

According to the sisters, Josh and Jeremy had made a vow to never get married unless they found true love with identical twin sisters. And this was something that Brittany and Briana could totally relate to.

Brittany believed that the boys had encountered the same exact challenges that she and Briana faced when they tried dating singletons, aka non-twins. “It’s hard when you’re dating someone and they don’t understand the twin bond,” she explained to People.

Fortunately, they had found each other. And there was a lot of planning to do before these twins ended up marrying twins. Briana told People, “A lot of the wedding planning was extremely fun and even peaceful for Brittany and I to do together because we have the same taste.”

They decided that getting married in Twinsburg, Ohio, where they’d met at the festival, would be perfect. But the toughest part was planning this double wedding day across state lines. But they made it work.

They Locked It Down

A year after they met, Brittany and Briana Deane, and Josh and Jeremy Salyers returned to Twinsburg, Ohio to get hitched in a double ceremony during the 2018 Twins Days Festival.

Twice Upon A Time

The theme of the wedding was “Twice Upon a Time”. And in an interesting twist, the couples weren’t the only ones who were identical twins. The twin ministers that presided over their wedding were also identical twins as well.

Men Of Their Dreams

It was the perfect moment. Brittany told People, “I get to marry the man of my dreams and at the same time I get to look over next to me and see my twin sister marrying the man of her dreams.” And their special day was immortalized.

Briana, who married Jeremy, described the wedding as a “double fairy tale”. She added, “It’s really been a fairy tale come true. Marrying twins is something that’s very important to us.” And there were times when they doubted this day would come.

Planning For The Future

All of their fears about an uncertain future were laid to rest when they said “I do”. Now Briana and Brittany are looking towards the future, particularly the children they plan on raising. And they won’t have to spend time apart since they’re all planning on living in the same house.

“When we have children, my and Josh’s children will be genetic siblings to Briana and Jeremy’s children,” Brittany told People. Essentially, it will be as if their children will have two moms and two dads. But there's more!

TLC recorded the entire wedding, and will air a one-hour special in 2019 to commemorate the journey that brought Brittany and Briana, and Josh and Jeremy together in the most twin-sical way.