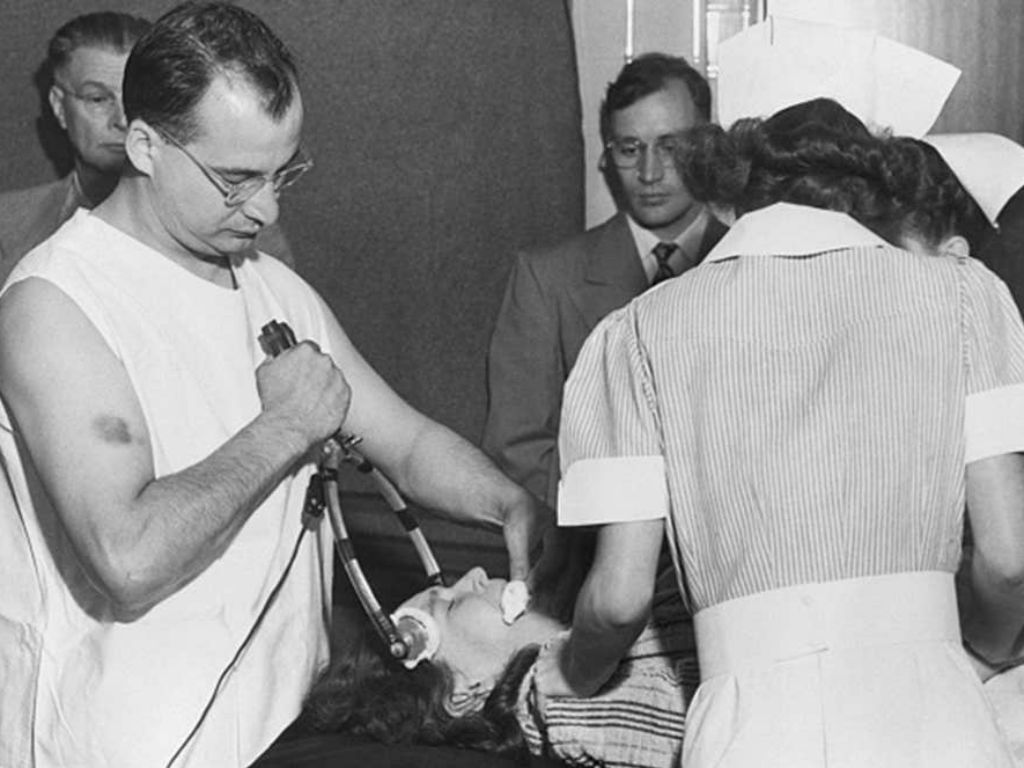 We definitely take our current medical advancements for granted until we are reminded of how backwards our healthcare was in times gone by. With the discovery of groundbreaking medicine and our understanding and approach to mental illness, it's easy to say we've come a long way. Just look at some of these alarming medical treatments that will make you glad you were born today.

Isolation was a common practice and a prominent course of therapy for mental illness from the 17th to the 20 century. Asylums and institutions were built to treat people who were mentally ill but their main purpose was to hide its patients from society. People with depression, schizophrenia or anxiety were often restrained and locked in a room, to become guinea pigs for psychological research and experiments.

Just the thought of head lice makes my head itch. You probably remember these nasty little insects that live in your hair and feed off your scalp causing an epidemic in elementary school. Luckily for you, modern medicine invented medicated shampoo as opposed to DDT for treating those unwanted guests.

Before we could pin point the root of certain illnesses, we blamed them on sinful acts. Like the Consumption, which was a disease that you caught when you dressed provocatively, drank alcohol, smoked and masturbated. The treatment: a cocktail of gases inserted in the rectum. Today the Consumption is known as Tuberculosis and is caused by bacteria of the lungs.

Cholera is a bacteria disease that claimed thousands of lives in the 1800s. Its symptoms are severe vomiting and diarrhoea and doctors thought the best way to cure this disease was to pour boiling water on the patient’s stomach and bleed them with turpentine enemas and brandy.

Removing Teeth and Tonsils for Depression

In the early 20th century, doctors held the notion that infected parts of the body were the root cause for mental illnesses. Physicians treated psychiatric patients by pulling their rotten teeth in order to get rid of physical ailments that would cause mental imbalances. If pulling teeth didn’t work, doctors would remove the patient’s tonsils.

A bath + electricity = danger. Am I right? In the late 19th century they didn’t seem to think so. Back then, chronic migraine sufferers and psychiatric patients were treated by taking a warm bath with electrical currents passing through the water. Doctors soon became weary of this sketchy treatment plan and today we use pharmaceutical drugs to soothe migraines.

We know it as a highly addictive, illegal narcotic, but in the 1800s it was known as “The Wonder Drug”. This fast-acting, over the counter, relatively cheap pain killer acted as an anaesthetic and was given to teething babies as well as adults with toothaches, sinusitis, depression and impotence. Cocaine was also used as eye drops to immobilise the eye during eye surgery.

In the early 20th century, doctors believed the best treatment for aneurysms was to put the patient on a strict starvation diet in order to reduce the force of blood flow from the heart. Although a healthy diet helps decrease the risk of an aneurysm, today treatment consists of minimal invasive surgery.

Croup is a common illness among infants that effects the lungs and larynx and its typically associated with a barking cough. In Victorian England, the treatment for suffering babies was to place them in a hot bath, followed by inserting leaches in their throat.. definitely not ok!

In 1927, physicians started using Insulin Coma Therapy as a psychiatric treatment for patients with schizophrenia and other psychological conditions. With this shock-therapy, the patient received large doses of insulin which reduced blood sugars and induced the patient into a coma. This treatment was carried out daily over several weeks and was believed to cure patients of the condition.

Heroine was once used to cure coughs, yeah you read right! In the late 1800s, the highly addictive drug was considered a safer, non-addictive substitute for morphine. It was popular among children with coughs, sore throats and a cure for the common cold.

In the 1800s they used snake oil as a pain remedy that helped reduce inflammation and high blood pressure. This absurd medication came from the Chinese water snakes and was high in Omega-3 fatty acids which were rubbed onto the joints of arthritis sufferers.

Narcotics for the Common Cold

Laudanum was a highly addictive narcotic drug which was popular for treating pain in the 19th century. The medicine was extremely cheap and its ingredients were a mixture of opium and alcohol - a cocktail for disaster as it knocked the patient out. Laudanum was used for Cholera, menstrual cramps and common colds.

Opium and Gin for Teething Babies

Another way to calm your baby during teething was to mix opium and gin. This heavy blend was prescribed for common fungal infections that babies are prone to such as thrush and aimed to quieten your fretful baby. However, the drug was also the cause of many infant deaths.

Blood Letting and Purging for Most Ailments

Blood letting and purging were mainstream approaches for treating both physical and mental illnesses. Doctors purged blood and vomit to treat the root cause of diabetes, asthma, strokes, depression and anxiety, in order to correct the imbalances in the body and rid patients of supposed infections. It was believed that physical contaminations in the body caused mental illness.

Also known as shock therapy, this method of treatment for mental illness was introduced as a safer alternative to Insulin Coma Therapy. Invented in the 1930s, this frightening form of therapy worked by inducing seizures using electricity in order to relieve symptoms of mental and emotional illness.

Calomel (a toxic mercury chloride) and Arsenic (a poisoning metallic chemical) to treat syphilis and other STDs. The side effects of taking this drug were rotten gums and destruction of the intestines.

Today we dread undergoing any sort of procedure even when we are numbed or under anaesthesia. It’s unbearable to think of being awake while you get your leg amputated, but once upon a time, it did happened. Anaesthesia wasn’t invented until 1846.

If you were unlucky enough to have had a cyst or haemorrhoid in the late 1800s to early 1900s, your treatment would consist of wrapping this scary tool around the growth, cutting off the surrounding blood flow, causing it to fall off. Today we use cream to remove haemorrhoids and gentle surgeries to cut away cysts.

Before the knowledge of radioactivity, humans praised radium for its natural goodness. Water was kept in radium-laced buckets, and people would drink the deadly liquid to cure illnesses such as arthritis and impotence. Soon everyone started dropping dead and the connection was made. Today we use drugs with non-radioactive properties to cure arthritis and impotence.

Before the invention of prothetic limbs, medical experts thought it would be a safe and practical idea to literally screw wooden pegs into the hollow cavities of an amputee’s leg. Although it proved successful to some patients, this risky and painful treatment isn’t a patch on today’s modern prosthesis.

Again we see another form of treatment for soothing a teething baby. As well as the popular treatment of lancing (cutting the gum to make room for the new tooth), parents opted for morphine syrup which today we consider a high risk and incredibly dangerous.

We’ve come a long way in our awareness and approach to mental illness. However, as recent as 50 years ago doctors were hacking away at the frontal portions of the brain in order to elevate mental and emotional illness. The most famous victim of this medical treatment was John F. Kennedy’s sister, Rosemary Kennedy.