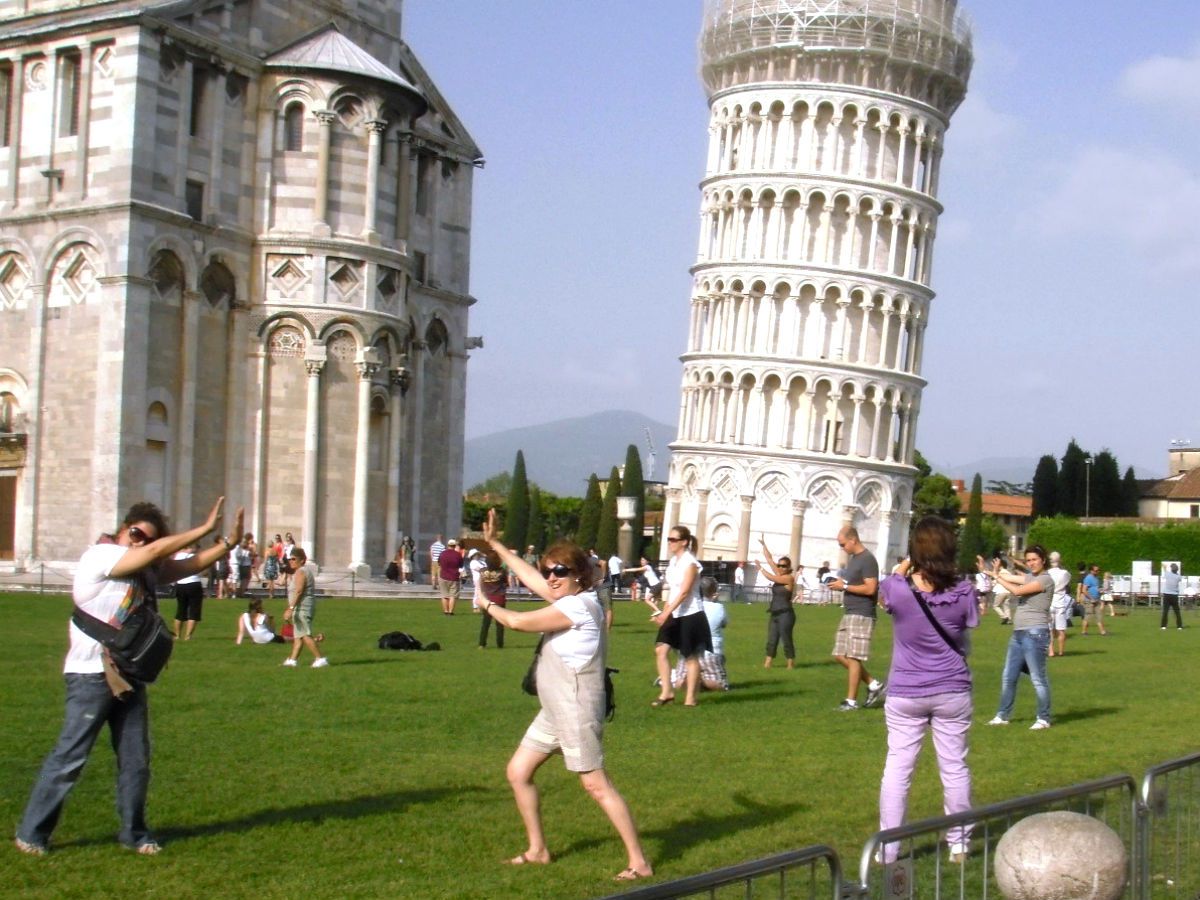 Social media lies and so do people. A little Photoshop here, a different angle here and a few filters there, and you’ve got a travel location that’s too good to be true. Here are some famous tourist attractions that failed to meet expectations...

Pretty much every traveler has this 13,000-mile barrier from ancient times on their list of places to see. And we all delude ourselves into thinking we’ll be the only ones trying to cross or attempt to cross the wall and take a cool selfie.

Reality: The Great Wall of China

If you thought you were the only person on the planet who wanted to visit the Great Wall of China, guess again. Tourists come from far and wide to get a snap while standing on this majestic landmark, so prepare to get photobombed.

You can go to Paris, France, and speak the language of love all you want. You might even want to take a romantic pic just like this one in front of the Eiffel Tower, and who could blame you? Just don’t expect to actually get to do it unless you have a professional photographer and some bodyguards.

There are long lines, tons of security and bag searches and of course, a very big crowd. But if you walk around and test all the different angles of the Eiffel Tower, you might get a pretty decent selfie. Keyword: might.

Every year, travelers come from different parts of the world to visit the statue of Christ the Redeemer, the symbolic protector of the people of Rio de Janeiro, Brazil. But getting close to this holy icon isn’t quite as easy as you’d think.

Many people seem to forget that the massive statue is 125 feet tall, and that includes the pedestal it’s standing on. But if you don’t mind the crowd in the background, you can still take a pretty cool picture.

In this shot, the Leaning Tower of Pisa looks absolutely epic with the sun in the background and a blue sky that’s absolutely flawless. But the truth is that angles can keep you from seeing the full picture.

Reality: The Leaning Tower of Pisa

This is what you’re likely to see if you go to the site of this 650-year-old architectural marvel. It’s full of crowded tourists that are all trying to take photos in front of it. The end result looks more like a three-tiered cake in the background.

The pyramids at Giza are one of the most fascinating wonders of the world. In fact, the site has attracted visitors for centuries. But the desert region isn’t quite as deserted as it might appear in this shot.

Reality: The Pyramids at Giza

The reality is that if you really want some alone time with the pyramids, you’re not going to get it. There are dozens of people lined up who, just like you, are dying to take a selfie with these spectacular pyramids in the background.

What’s not to love about The Magic Kingdom? You get to meet Disney characters and visit Cinderella’s castle, like this kid’s about to. But it’s all about perception and angles. Plus, that castle isn’t as close as you’d think.

The harsh reality is that there’s a sun-blocking wall right next to where the photographer was standing. The park is really crowded, too. So waiting for the light to cooperate so that this kid gets seen in this shot was not quite so easy.

Instagram users often load a photo of Mount Rushmore in Keystone, South Dakota, that looks more like the photos you saw in a history textbook when you were in school. But the reality is extremely different.

Although George Washington, Abraham Lincoln, Thomas Jefferson, and Theodore Roosevelt are about 60 feet tall, they’re so far away that someone would have to take a photo while crouched on the floor to get themselves and the presidents in the same shot.

The Instagram version of Machu Picchu shows the ancient Incan citadel, the lush vegetation and the mountainous peaks. But those narrow lanes and paths aren’t as empty as they seem.

The reality is that getting into Machu Picchu is a lot like waiting in line for a ride at Disney. So, wear some comfortable shoes and consider making some friends, because there are plenty of tourists waiting at the entrance.

Most of us want to snap an Insta-worthy snap, looking all fierce with the wind blowing in our hair and an incredible view in the back. But to get to the top of the Empire State building is an uphill battle that involves a lot more than what this image of this gorgeous woman and background are showing.

The lines at the Empire State Building are insane because everyone wants to visit this epic landmark in New York City. The wait time may seem endless, but you know, at the end of the day, it’s still worth it to take a snap in one of the country’s tallest skyscrapers, right?

This shot makes you want to travel all the way to Norway to sit on this rocky balcony overlooking Mother Nature’s majestic backdrop. But as bold and as daring as this selfie looks, there’s something this photo doesn’t tell you.

What many people don’t realize is that other travelers had the same idea. So, take a deep breath because it’ll be a while before you get your turn to sit on the edge of that rockface to get that epic selfie.

Wouldn’t it be lovely if this is what that marble mausoleum in the Indian city of Agra looked like all the time? You could take as many selfies as you wanted with one of the world's most stunning pieces of architecture as the backdrop.

Unfortunately, when you actually visit the Taj Mahal, you’ll find that there isn’t a whole lot of room to take photos. You might be able to get a few snaps in, but you’ll have to Photoshop the people in the background.

When you’re a blogger who likes to take travel photos, you really have to look like a Hollywood star all the freaking time. This gal looks absolutely gorgeous standing near Niagara Falls with the rainbow over her head. But it’s not always this dry.

There are a lot of things travelers need to expect when visiting Niagara Falls. For starters, there’ll be lines during the middle of the day. You may also have to wear protective gear like these folks. Otherwise, you, (and your cellphone) will get really wet.

Every first-time visitor to Beijing knows that they have to check out the Forbidden City. The temple’s ornate beauty, colors, and designs attract tourists all year long. But here’s why you might get tempted to say, "thank you, next" if you visit.

Visiting the Forbidden City on public holidays or weekends is a really bad idea. Your experience will be ruined by the tons of tourists that have also come by to take a snap of this breathtaking world site. But it’s still worth a look.