Camila Villafane
This Japanese Citizen Continued Fighting in World War II for Over 30 Years After the War Ended February 10, 2021Leave a comment 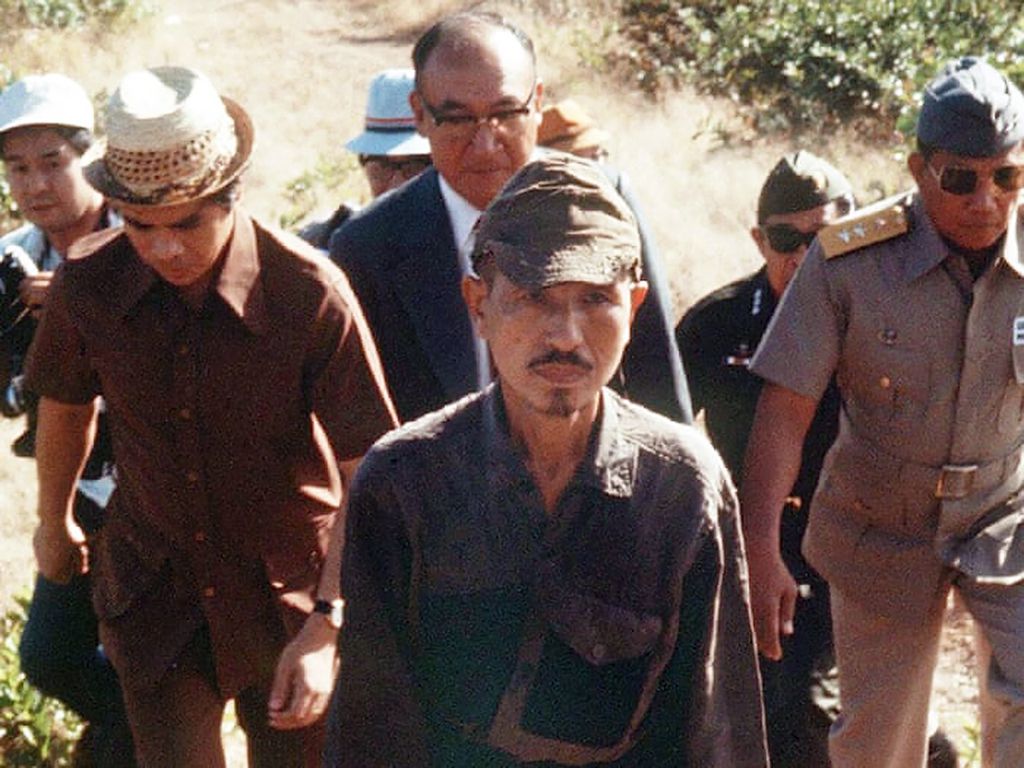 World War II brought a great deal of devastation throughout the world. But Japan took one of the biggest hits of the 20th century when the United States dropped nuclear bombs on the Japanese cities of Hiroshima and Nagasaki in 1945. But as horribly destructive as these explosions were, the war came to  an end that same year. Unfortunately, one Japanese citizen never got the memo.

He Was Just a Teenager

According to his biography, “No Surrender: My Thirty Year War,” Hiroo Onoda was 17 years old when he started working for a trading company in 1939. His goal at the time was to save enough money to become independent from his parents and move to China. Eventually, he achieved what he wanted. But then, the unimaginable occurred.

Japan Went to War with the U.S.

Onoda had been living in China for a year when Japan attacked Pearl Harbor, an American naval base on December 7, 1941. Soon, Japan found itself at war with the United States and the Japanese government started recruiting young men for the war. And in May 1942, he was ordered to undergo an army physical, but there was a silver lining, or so he thought.

He Was a Party Animal

Onoda partied a lot and smoked over 50 cigarettes daily while he was in China, so he was convinced he would fail the physical. As luck would have it, he passed and was sent to join the 61st Infantry Brigade. But he didn’t complain.

He Was Honored to Serve

He considered himself a patriot and was proud to serve. In order to do that, he studied kendo, a form of martial arts, and swam in the ocean for several hours a day. Eventually, he was recruited into “The Devil’s Crew Men,” a training unit that taught him discipline and more.

He Moved Up in the Ranks

Onoda eventually made his way to the Makinoma Military School’s Futomata branch where he learned about field intelligence and guerilla warfare. But he had no idea that this training would pay off when he was assigned to Lubang Island—one of the many Philippine islands Japan had captured and was struggling to keep.

He Was Ordered to Defend an Island

While in the Philippines’ capital of Manila, Onoda received a new assignment from Japanese Intelligence Division Major Satokata Takahashi. His orders said: “Apprentice officer Onoda will proceed to , where he will lead the Lubang Garrison in Guerrilla Warfare. You are absolutely forbidden to die by your own hand. It may take three years, it may take five, but whatever happens, we’ll come back for you. Until then, so long as you have one soldier, you are to continue to lead him. You may have to live on coconuts. If that’s the case, live on coconuts! Under no circumstances are you allowed to give up your life voluntarily.” But his training certainly hadn’t prepared him for what was to come.

No One Respected His Opinion

Although he was ordered to destroy enemy airfields, his commanding officers were left questioning his decisions. This made it impossible for him to do his job and help his country. But eventually, the Americans came along and forced him to put his training to the test.

American forces raided Lubang in February of 1945 and the Allied Forces dropped bombs and heavy artillery throughout the island. But while most Japanese soldiers were willing to lay down their lives, Onoda decided that a temporary retreat was a better option.

Retreat Was Better Than Defeat

In his book, Onoda wrote: “I decided on a retreat. If we dug in and made a stand where we were, we did not have the remotest chance of winning. I figured that the only chance left was to go up into the mountains and carry on a guerrilla campaign.” So the surviving Japanese soldiers split up into groups and spread out into the wilderness.

His Team Had to Rough It

Onoda picked Kinshichi Kozuka and Suitshi Sumata as his teammates and the three of them did what was necessary to avoid the enemy whenever possible, but it wasn’t easy. Not only did they have to avoid capture, but they were kept awake by the sound of nearby planes and ships. If that weren’t bad enough, they also had to deal with snakes, scorpions and poisonous ants, one of which robbed him of his ability to hear for up to a week. But that wasn’t the worst of it.

The rainy season was so bad on the island that the men had to learn how to construct bamboo huts using coconut leaves, branches and trees. Fortunately, the island provided them with sustenance like bananas. But sometimes, when the need was great, they resorted to more drastic measures.

They Stole Meat From Nearby Farms

Onoda, Kozuka and Sumata would sneak into a nearby farm during a rainstorm. Then they’d shoot a cow that had separated itself from the rest of the group, and take it back to their campsite to consume. To preserve the meat for a couple of weeks, they would salt it. But whenever they spotted rice farms, they did something unexpected.

They Attacked the Enemy’s Rice Fields

Onoda knew that the Allied Forces depended on the rice farms, so instead of stealing the rice, they destroyed them, including the Filipino farmers running them. And yet, no one had caught them while the war was still going on. But eventually, they couldn’t hide behind the camouflage of conflict.

Japan surrendered on September 2, 1945, but Onoda and his team were not aware of this. Everyone back home assumed they were dead. But they were very much alive and attacking Filipinos. Then in October 1945, Onoda found leaflets that told him the war was over, but he refused to believe that Japan would have surrendered, so his team continued to attack people randomly for several years. And the Filipino government knew they had to convince these soldiers that they were no longer enemies.

They Tried to Get the Soldiers’ Attention

The Philippine Air Force dropped several leaflets in February 1952 that had photos and letters of the men’s families. But Onoda and his team believed this was all a trick from Allied Forces. So, they continued to fire on anyone whom they deemed a threat over the years. And then they fired on the wrong people.

They Had a Scuffle With Fishermen

Onoda and his team ran into some fishermen that they assumed were spies. So, they fired their weapons, but the fishermen fired back. Sumata was injured in the knee and a few days later, he died. But this wasn’t the last person Onoda was destined to lose.

He Survived for 18 Years

Onoda and Kozuka weren’t best friends but they did help each other stay alive for 18 years. But on October 19, 1972, the men got into a firefight with the Filipino police and Kozuka lost his life. Fortunately, Onoda escaped, but he found himself alone once again.

His Mission Was to Find Hiroo

Norio Suzuki considered himself a free spirit who had very few goals in life. One of them was to locate Hiroo Onoda. So, in 1974, he went on a journey to Lubang Island to bring back the lost Japanese soldier.

The Lost Soldier Was Found

Once Suzuki landed in Lubang Island, he went to the jungle and called Onoda’s name. And when the lost soldier appeared with his rifle drawn, Suzuki explained to him that the war was over. But Onoda would only agree to a surrender if his commanding officer, Major Yoshimi Taniguchi ordered him. So, Suzuki returned to Japan and had the Japanese government track Taniguchi down.

Major Taniguchi traveled to Lubang Island and ordered Onoda to surrender in what became a media frenzy. The Filipino government pardoned him and Japan hailed him as a hero. And after years of sleeping with one eye open, Onoda could finally rest, but something troubled him once he settled in Japan.

He Wasn’t Happy With Japan

By 1974, Onoda was finally back in Japan after several decades of being away. But he wasn’t fond of how his people had forsaken the old ways and embraced Western customs. Even the city looked unrecognizable to him with all of its neon lights. So, he decided that Japan was no longer home.

He Found a New Trade in Brazil

Onoda needed to find himself, so he decided to move to Brazil and live among a community of Japanese immigrants. While he was there, he discovered a love for something other than the military. He became a cattle farmer. But a new trade wasn’t all that he found in Brazil...

He Met His Future Wife

While living in Brazil, Onoda met Machie, a woman who taught the community all about old Japanese traditions. It was a match made in heaven, and they eventually got married in 1976. But in the 1980s, Onoda got wind of a young Japanese man who murdered his parents because he didn’t get into college. That’s when Onoda realized that Japan still needed him.

He Came Home With a Purpose

In 1984, Onoda repatriated to Japan with his wife and founded the Onoda Nature School, a camp designed to teach wayward kids the same survival techniques he used to survive in Lubang Island for so many years.

Gone, But Not Forgotten

Onoda used his military pension as well as royalties earned from his autobiography to support himself financially. And in his final years, he visited schools in Japan and gave lectures about how nature could help one find a path. Sadly, he passed away on January 16, 2014, but he will never be forgotten.