This Man Does The World’s Most Incredible Balancing Tricks

Harvey Shepherd
This Man Does The World’s Most Incredible Balancing Tricks July 31, 2019Leave a comment 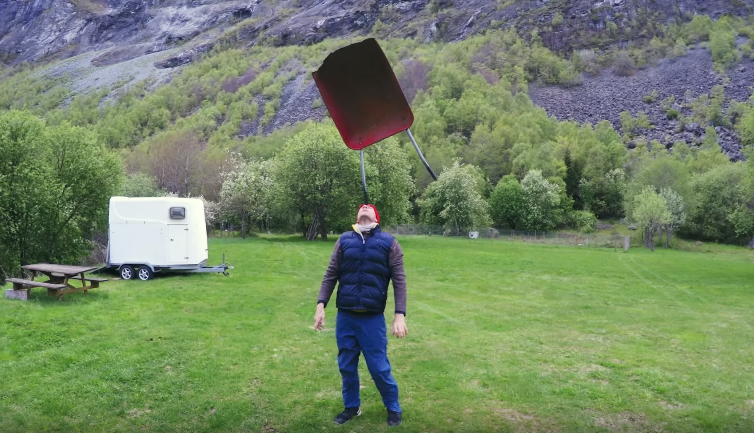 There are lots of amazing people who dedicate their lives to mastering one skill and Eskil Ronningsbakken is one of them. However, the skill that Eskil picked to master is super dangerous. The man loves to balance himself in dangerous locations such as a cliff's edge on a mountain while standing only on his two hands. Some might call him an adrenaline junky, but Eskil doesn't see himself that way. He simply loves to find the balance in life and performing these risky moves helps him to do that.

Eskil Ronningsbakken has been fascinated with balancing since he was a little boy. He always liked to place things on top of each other and find their center of gravity, similar to building a castle from playing cards. However, Eskil is now taking things to the next level.

Eskil spends most of his time training for incredible balancing acts such as the one featured in the picture above. He needs to have lots of upper body strength to pull off these tricks.

As if riding a bike on a wire that is hanged over a massive cliff wasn't dangerous enough, Eskil decides to take things to the next level and he does a headstand. Isn't that crazy?

Everyone who sees Eskil perform these incredible balancing tricks is left in awe. Although, who can blame people for being amazed when they have never someone do something so amazing before?

Even though Eskil is often categorized as an adrenaline junky, he would rather be known as a Daredevil. He is such a master at his craft that the adrenaline doesn't make him feel any different.

While most people are afraid of getting in a hot air balloon, Eskil takes things to the next level once again and hangs from below it. Eskil must be really brave.

Eskil said in an interview that he likes nothing more than to find a balance in life. When he is performing in all these dangerous locations, nothing else matters to him and this brings him clarity.

One of the most amazing things about performing these life-threatening performances is the fact that it puts everything in perspective for Eskil. He doesn't think about paying the mortgage anymore and the only thing that matters is the performance.

Eskil is brave and there is no doubt about that. However, he does admit that from time to time, he needs to have a "little talk" with himself and encourage him to keep performing.

The art of balancing himself in dangerous spots is not only about adrenaline it's also a way for Eskil to express himself. There's nothing else that gives him the same feeling of freedom.

Another cool thing about climbing mountains in order to perform risky balancing acts is that Eskil finds the best spots to meditate. Just look at how amazing this picture is.

Even though it might seem like all of this comes naturally to Eskil, this is not actually the case. He needs to put in lots of work in the gym in order to perform these daredevil tricks.

8. The Most Impressive Trick

Eskil has performed all types of scary tricks during his career but now, we are going to show you the most impressive one out of all! Get ready to be amazed!

The video starts with Eskil setting up three chairs on top of each other. What the camera doesn't show us is that he is actually climbed on top of a mountain.

We think it's safe to say that Eskil made the right decision by bringing the GoPro camera with him because no one would've believed what he does next otherwise.

This picture shows us just how incredible Eskil's balancing act is. One small move and he could fall off the chairs and drop in the massive cliff.

If there is something that we can be sure about, then it has to be the fact that Eskil's performances are truly amazing. How many other people do you think have the same courage as Eskil?

Once again, balancing himself was not enough for Eskil and he takes things to the next level by doing a handstand.

Even though Eskil's performances might look risky, he says that he is always safe. He never tries to balance himself on something that he doesn't feel like it can hold his weight.

1. The Next Big Trick

This has been the story of Eskil and his incredible balancing tricks. We can only wonder just how amazing his next big trick is going to be.