Jen Arbues
This Man’s Reaction to Keeping His Foster Dog Will Melt Your Heart March 14, 2019 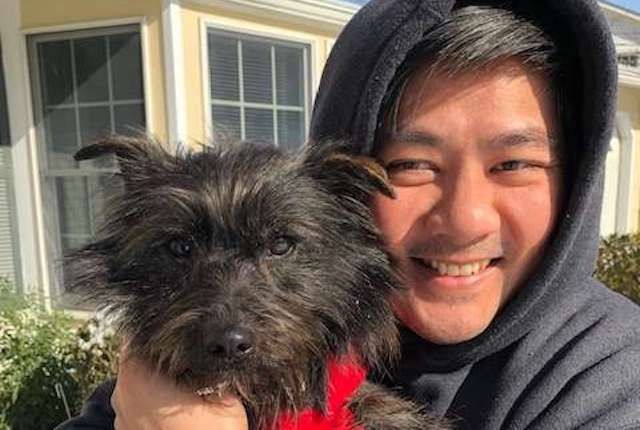 Toby is a 2-year-old terrier mix from South Korea. Luckily, a local rescue saved him from a life on the streets. His foster family in America never expected to fall in love with him. But they did. So this man’s reaction to keeping his dog? Above all, it will restore your faith in humanity.

Tei and the Auto Shop

In the middle of winter, a 16-pound, 2-year-old terrier mix wandered into a South Korean auto repair shop. It was likely the dog's previous owner had abandoned him, so someone brought the dog to a nearby animal shelter.

The shelter, in Asan, South Korea, provided the dog with basic shelter, food and water. But they dog stayed in an outdoor kennel and had to endure the harsh winter without any warmth.

Band for Animal is a non-profit organization that works between Virginia and Korea. It’s comprised of volunteers whose mission it is to rescue dogs facing euthanasia, abandonment or death via the meat-market trade.

South Korea has a long-standing tradition of using dogs for human consumption. Most often, dogs stay cramped kennels to starve and suffer torture before being slaughtered and turned over to restaurants or other vendors.

According to Gina Boehler, founder of Korean K9 Rescue, "Not only are these dogs living in constant fear from the day they are born, they experience trauma and horrific living conditions. They are often hanged, beaten to death, electrocuted and boiled alive before slaughter because suffering is believed to make the meat more potent."

Back in the States, Ann Hoang and her husband already had their hands full with Miss Charlie, a Shih Tzu/mini-poodle mix. But Hoang wanted another dog in the family, a thing her husband wasn’t totally sure about. So he agreed to try fostering first. They took in the dog from the auto shop.

The dog lasted about a week in his new home before Hoang made the decision to rename him Toby. But for those first few days, the family had to deal with some serious adjustments. Toby had been more traumatized than they realized.

Toby came with reservations surrounding his new life and family. He was hesitant to come out from his crate in the beginning. And when he would, he struggled to interact with anyone in the Hoang family.

Eventually, though, Toby settled into his surroundings. He warmed up to Hoang and her family, and he and Miss Charlie became an inseparable dog duo. But there was one Hoang family member that Toby especially grew close to...

Hoang said, "At first, my husband was unsure of Toby because he was very timid and also this was our very first foster experience. However, by the [first] evening, Toby had sat down next to my husband and he looked up at him with his puppy dog eyes, and my husband saw the kindness of God in Toby's face. Toby seemed to attach to my husband pretty quickly from there on out."

It didn’t take long for it to feel as though Toby had been one of the Hoang gang all along. And while it had always been Hoang’s plan to foster the dog just until they found him a permanent home, it soon became clear that things were not going to work out that way.

According to Hoang, “We had two families who wanted to schedule a meeting with Toby, and when that happened, I just realized how crushed my husband would be without him. It had only been one week but my husband and Toby were inseparable.”

Hoang knew that Toby was meant to be a permanent member of their family. Knowing how much Toby meant to her husband, she made the decision to contact Band for Animal and let them know she planned to adopt Toby once and for all.

“My husband is such a giving person, always putting others before himself,” Hoang explained. “He's never really asked for anything or wanted anything badly. Toby was the first experience where I could see he would be heartbroken without him.”

In order to adopt Toby, Hoang would need someone from Band for Animal to do an official home check. With the rescue in on her plan, Hoang told her husband that the person coming to the house was actually a potential adopter.

Hoang gave the visitor from Band for Animal a card to give to her husband during the visit. “Oh, man. Okay,” Hoang’s husband read, “Dear Husband. There’s nothing that brings me more joy than seeing you filled with joy...”

While Hoang’s husband continued to read the card, he began to choke up. “As the past week has gone by, there has been something that has shifted in our family. Something that has brought us closer, brought some of my walls down.”

As he reached the end, Hoang chimed in, saying that his gift was “in front of you.” Her husband perked up, seeing Toby wagging his tail. “What? No. Wait, wait, wait.” He couldn’t hold back the tears.

As the realization that Hoang had decided to officially adopt Toby into their family set in, her husband could not control his emotions. He pulled Toby into his arms and asked, “He’s in our family?”

Looking back on the experience, Hoang said, “Oh my goodness, I thought he would be happy but never in a million years did I think he would cry so much. I have never seen him react this way to anything before! He is sensitive, but this was more than I've ever seen.”

Needless to say, it didn’t take much convincing on Hoang’s part to get her husband to accept Toby into their family permanently. “No one expected we would be a foster fail for the first time around, but it was so meant to be.”

Emotions From the Other Side

Sometimes, though, it isn’t just the people involved that bring out the water works. In late 2017, this dog was reunited with its owner after three years of being separated. Within moments, it was the dog that seemed to completely lose it.

In early February, Callie, a 13-year-old nearly blind St. Bernard, went missing near her Aledo home. 23 rainy, freezing cold days went by, with Callie’s family believing the dog to be gone forever. Then, at the beginning of March, Callie was found — 15 pounds lighter, but fine otherwise. And happy to be reunited with her family.

In Saginaw County, Michigan, one family’s dog went missing for an entire 19 months. When Saginaw County Animal Care reunited her with her family, it took a while before she was able to recognize their scent. But once she did, all bets were off.

For 62-year-old Giorgi Bereziani, the hope of one day finding his lost dog Jorge had never died, even after three years. Finally, local opera house employees recognized Jorge from his photo in posters and contacted Bereziani, who was able to finally reunite with his best friend.