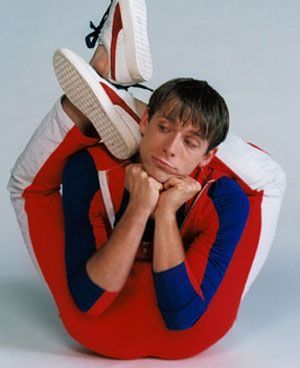 If you think that doing yoga is difficult because you need to be flexible and to have core strength, then you are never going to believe what a man by the name of Daniel Browning Smith does for a living. Daniel is known as the rubber boy and the reason why he earned this nickname is because he is the most flexible person on the planet. He holds multiple Guinness World Book records and no other contortionist is ever going to take them away from him. He is just on another level, close to a superhuman!

There are many awesome talents that people can master in order to impress their friends but being a contortionist is not one of them. You need to be born with an "elastic body" in order to perform incredible tricks as contortionists do.

Even though there might be tens of thousands of contortionists in the world, there is one that is better than all of them. We are talking about Daniel Browning Smith who is also known as the rubber boy thanks to his special talents.

Daniel is leaving live audiences in awe everywhere he goes. No one can believe his amazing skill and the way he can bend his body is almost terrifying.

Since Daniel can bend his body in really strange positions that normal people can never try, then it should come as no surprise that he holds multiple Guinness World Records. He is the one that all other contortionists look up to.

Daniel is not just an amazing live performer, he is also a freak of nature. Everyone who sees him doing his incredible tricks is left shocked and asking themselves how can a human bend like this?

Daniel's favorite and most popular trick is called "locked in a box". As the picture featured above shows us, Daniel is flexible enough to make himself fit in a very small box. Isn't that crazy?

The rubber boy is so amazing that scientists are classifying him as a superhuman. After all, how many other people do you know who can bend their bodies so drastically that they can fit in a suitcase?

Even though Daniel is training his muscles every single day, he was born with this talent. The rubber boy says that he discovered his talent and passion for contortionism when he was in preschool.

Daniel was fooling around the classroom and bending his hands. That is when he noticed that no one can bend like him and he decided to start trying more impressive tricks to see just how special he is.

Nonetheless, Daniel is now a grown man and he makes a living using his talents. People love to see amazing performers like him and Daniel's live performance is booked for special events all over the world.

The rubber boy always loved to show off his amazing skills and now, he is making a living out of. He was born with a gift and he is doing a great job of capitalizing on it.

9. Performing With A Band

One of the most amazing performances that Daniel does is when he teams up with a band. As the band is playing music, Daniel gets on stage and proceeds to stun the live audience with his tricks.

The cool thing about Daniel's performance is the fact that he synchs his strange movements with the music played by the band. This show is something that you shouldn't miss if it comes to your city.

If you thought that the tennis racket trick wasn't impressive, then you should be pleased to find out that Daniel can do it with a toilet seat as well!

Even though Daniel's elastic muscles make him more skilled than all other contortionists, this is not what really makes him special. Daniel stands out the most because he has a great comedic sense.

When Daniel is not performing on stage, he doesn't want to be known as the rubber boy. He is living a normal life just like all of us.

Daniel is saying that while his career as a performer might be successful, he is not satisfied. He wants to do great things and he hopes that he will eventually appear on TV.

If Daniel keeps practicing his special moves and keeps the same great attitude, we think it's safe to say that he is eventually going to achieve his dream of appearing on TV. Don't you think so?

The last thing that we want to say is that everyone should give Daniel praise for the hard work he is putting in during his training. There aren't that many people who can bend like him and this makes him very special.