Harvey Shepherd
Meet The Modern Samurai Who Can Slice A Flying Bullet In Half July 29, 2019Leave a comment 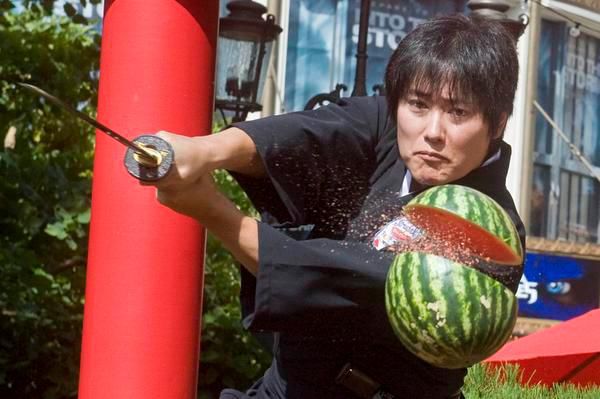 Cartoons and superhero movies have taught us that there are special people who live among us and that they possess superhuman powers. Even though we might not have people who can fly, the world is filled with actual superhumans who have insane skills that can't be mastered. The only way to get them is to be born with them. One of those people is named Isao Machii and he is known as the Modern Samurai. This man is so skilled with a katana that he can even catch a flying bullet in mid-air!

Even though the Samurai Era might be long gone, it's not forgotten. There are still many people who practice the lessons taught by the samurais and Isao Machii is one of them.

Japan is filled with lots of amazing fighting schools and some of the most amazing ones are those that specialize in katana training. This is the same art that Samurais practiced all day long and Isao Machii is a master at it.

The man in this picture is Isao Machii. As previously mentioned he is known as the Modern Samurai and he is already an internet celebrity. Not just that, but Isao Machii also appeared on numerous Japanese TV shows where he showed off his skill.

Isao Machii says that he has been training in the way of the katana since he was a little boy. He always had katana in his hand and this is why he feels so comfortable when wielding it.

The Modern Samurai is not just a skilled swordfighter, he is also a Guinness World Record holder. He is so fast with the katana that the Japanese TV shows have categorized him as a superhero.

One of the first shows that Isao Machii appeared didn't believe that he was super fast and they wanted to test his skills. They first started with a football.

As the football is coming closer to the Modern Samurai, he pulls out his katana and in a swift motion cuts the football in two. Everyone was stunned, but the best had yet to come.

The TV host agreed that Isao Machii is fast, but she still needed to see more. This is why she decided to test his skills with a baseball that was thrown at 300 KM/h.

To everyone's surprise, Isao Machii sliced the speeding baseball in two. If the TV host blinked, then she would've missed the moment that the Modern Samurai pulled out his sword because he was incredibly fast.

Scientists have studied footage of Isao Machii and they determined that he has a strong grip of the katana and that he can pull it out of the holster in 0.5 seconds! Can you believe that?

Since Isao Machii spends most of his time chopping all types of things in half, then no one should be surprised that he is more than willing to test his skill whenever someone challenges him.

From the looks of it, Isao Machii is the real fruit ninja. While cutting a watermelon in half might look easy, it's actually quite difficult due to the fruit's density.

8. The Most Impressive Record

Even though Isao Machii has cut all types of stuff in two at fast speeds, his most impressive record is cutting a bullet in mid-air. Yes, you read that right. He actually managed to do that!

As everyone surely knows, bullets travel at super-fast speeds. In fact, they are so fast that you can't even see them. This leaves one question, how can Isao Machii cut one in half?

As the shooter is pointing the gun at Isao Machii, the Modern Samurai starts counting down the seconds before the bullet starts flying towards him. He doesn't need to see, he only needs to hear the gunshot.

Since the bullet travels so fast that we can't see it, the Modern Samurai needs to rely on his other senses such as hearing. This is why he is focusing so intensely before the bullet is fired towards him.

After a couple of seconds of intense silence, the gun goes bang and Isao Machii is already pulling his sword out. Can he actually do it?

With a swift movement, the Modern Samurai pulls out his sword and slices the thin air. Do you think he managed to cut the bullet?

This picture shows us that Isao Machii lived up to his nickname of the Modern Samurai. He is truly impressive.

If there is something that we can all agree on, then it has to be the fact that Isao Machii possesses superhuman speed. Only SCi-Fi movie characters can slice bullets in half!