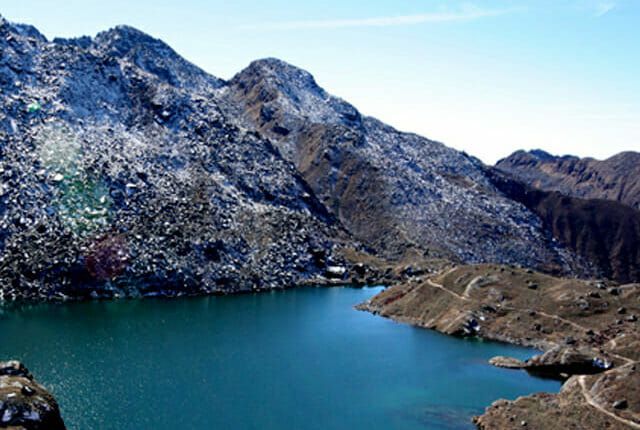 Obviously, the world is a magical place full of natural wonders that entertain the eye, boggle the mind and lift the spirit. And I'm talking about soaring heights, towering trees, vistas for days, etc. But even in an earthly cathedral, the most terrible things can happen to the innocent and unsuspecting at any time. Just picture it: You're taking it easy, enjoying the view. And then, suddenly, darkness descends upon you. It could be poorly timed natural causes. Or a terrible accident. Or even, yes, murder. So come with me and explore the most beautiful places in the world where people died horrible deaths.

No murder here, but plenty of death all the same. In Eaton Canyon there is a storied second waterfall to which there is no safe access. But social media word of mouth has induced hikers, especially adventurous YOLOing teens, to seek it out. But the crumbling rocks can be trickier than it looks, and at least five people have died here since 2011, with many more ending up seriously injured.

In 2006, a newly ordained Tibetan Buddhist nun named Kelsang Namtso was shot and killed by the Chinese People's Armed Police. She was traveling with a group of Tibetans making the grueling trek from Tibet to Nepal, fleeing their occupied country in the hope of practicing religious freedom in India. Instead, the peaceful Namtso found herself gunned down by gestapo forces. Witnessed by an international group of mountaineers and journalists, the murder is the subject of Jonathan Green's book Murder In The High Himalayas.

In 1629, a ship in the midst of a mutiny crashed on the uterus-shaped Beacon Island. It has since come to be known as Murder Island, since the mutineers raped massacred anyone who stood in their way in a seizure of power eerily reminiscent of Lord Of The Flies - death estimates go as high as 125. Despite their desperate and dastardly efforts, the murderous culprits were caught, tried, and hung.

Okay you guys, buckle in. The Wikipedia page for this one is a roller coaster ride of the best gd kind. We've got ANOTHER unsolved case from Australia, in 1948 this time. It is known as the Tamam Shud case, after the words found on a scrap of paper in the dead man's pocket - "tamam shud" means "ended" or "finished" in Persian. There is a whole bunch of mystery around it which you should def explore if that's your thing, but they did so much investigating and they still don't really even know who the dead man even was.

In 2012, 23 year old Belgian woman Debbie Maveau went off for a solo hiking trip around Gosaikunda Lake in the Nepalese Himalayas. Her body was found in 10 days after her family reported her missing, badly decomposed and decapitated. Any motive other than pure violence is unclear, as she was neither raped nor robbed, and Maveau's murder remains unsolved.

Violent crime is rare in Iceland, and so when in January 2017 Birna Brjánsdóttir disappeared near the Reykjanes Peninsula, Iceland was shook. The search for Birna was far reaching, and ended up exposing a wild European cannabis smuggling operation. Birna was found to have been dumped in the freezing waters of the North Atlantic while she was still alive.

Okay my dearies, get ready. So in 1895, Bridget Cleary was reported missing from her home in Ballyvadlea. Turns out her husband and father thought she was possessed by FAIRIES, and so they, um, burned her to death. And they apparently convinced a bunch of people to help them do it - 10 individuals were prosecuted in connection with Bridget's death, including a priest.

In 1873 on the bucolic New England Smuttynose Island, two Norwegian woman were struck with a hatchet and killed by German Louis Wagner. A third woman escaped and was able to identify him to the police. No motive was ever determined and Wagner maintained his innocence to the grave and even broke out of jail, despite all evidence certifying him as the culprit.

Puerto Viejo, a small town on the Caribbean coast of Costa Rica and another place to which yours truly has been personally, held host to a violent murder in March, 2017. My friend and I holed up here during Semana Santa in 2004 and smoked weed in a ylang ylang tree! But last year a Canadian tourist was robbed and murdered on those very same beaches. Damn.

In the early '80s, ex-con David Carpenter murdered eight people in the rolling redwood hills in the area around Santa Cruz, California. He was apprehended after he attempted to rape a woman and shot both her and her hiking companion. The companion survived, and was able to identify Carpenter, and police authorities linked him to the numerous similar murders in the Central California area.

Okay so a year or so ago Netflix recommended that I watched a British TV crime doc about these murders. It was pretty interesting - a British family, plus a French cyclist who appeared to have intervened, were murdered while on vacation in the French Alps. What was the deal????? posited the documentary. The truth is that no one knows, and the deaths of these people on holiday remains unsolved. So my recommendation is skip the TV doc, check the Wikipedia page.

On January 11th, 1965 the bodies of Marianne Schmidt and Christine Sharrock, both aged 15, were found partially buried on Wanda Beach. The murders did not appear to be premeditated - there was evidence of rape and blunt force trauma on both victims, though the brutal stabbing was determined to be cause of death. The investigation was the most widespread in Australian history at the time, interviewing nearly 7,000 people in connection with the case, but it remains unsolved to this day.

In 1882, Lord Frederick Cavendish, the newly elected Chief Secretary for Ireland, and Thomas Henry Burke, the Permanent Undersecretary, were fatally stabbed in this lovely Dublin park. Cavendish's death was unfortunately incidental! The radical Irish National Invincibles had been trying to assasinate the Undersecretary for a while, and Cavendish just happened to be hanging out in the park with his friend Burke at the same time.

Between February and July 1999, serial killer Cary Stayner murdered four woman in Mariposa County, out near Yosemite National Park. He became known as the Yosemite Killer and was convicted to death. He remains to this day on death row in California's San Quentin Peniteniary, awaiting execution.

In 2014, two British tourists went to a beach party on the idyllic Thai island of Koh Tao. In the morning, their bodies were found in the shallows - the woman raped, both of them violently and horrifically murdered. These deaths in paradise made international headlines, and the in the ensuing failure of a trial that ended up scapegoating two Burmese migrants it was indicated that the actual culprit might be the son of a prominent local politician. Since then, FIVE OTHER TOURISTS have died under suspicious circumstances, and a simple Googling warns off Westerners from any ideas of tropical holidays on Koh Tao.

For about 20 years beginning in 1919, the area around the Kuskokwim River in Alaska was held in thrall to an Eskimo man named Klutuk. Legends throughout Alaska tell of the legendary Klutuk who killed any trapper he felt was encroaching upon what he looked upon as his area. His violence was brutal but impersonal, leaving bodies with both gunshot and ax wounds. He died in 1938 of unknown causes, though many tried to take credit for his slaughter.

Oh man. So in 1982, a 27 year old nurse named Bridie Gargan was sunbathing in Dublin's Phoenix Park. The unhinged Malcom MacArthur hit her with a gd hammer in order to steal her car and escaped to the country while she bled to death in the backseat. He was apprehended only after he murdered a farmer with his own shotgun.

In 1996, girlfriends Julie Williams and Lollie Winans went backpacking in Shenandoah National Park and set up camp by a rushing mountain stream. Investigators believe the running water may have muffled the sound of approaching footsteps from muderer Darrell David Rice. The women were found bound and gagged with their throats slit in what Rice admitted in court was a hate crime. Fortunately it was the last known murder to take place in this national park.

Abrams Falls is a renowned location in Great Smokey Mountains National Park - a beautiful rushing waterfall. Unfortunately, it is also the location of many, many deaths. Vacationers ignore the warning signs trying to get that perfect picture, and get swept over the edge. It may not look deadly, and that's part of the danger.

In 2009, a female tourist from New Mexico was found naked and strangled on the stretch of Waikiki Beach in front of the Royal Hawaiian Hotel. Y'all I have been to Waikiki! There should really be, like, a murder warning sign at some of these places.