When Loggers Cut Down A Tree, They Didn’t Expect To Find This Inside

Jen Arbues
When Loggers Cut Down A Tree, They Didn’t Expect To Find This Inside February 25, 2019 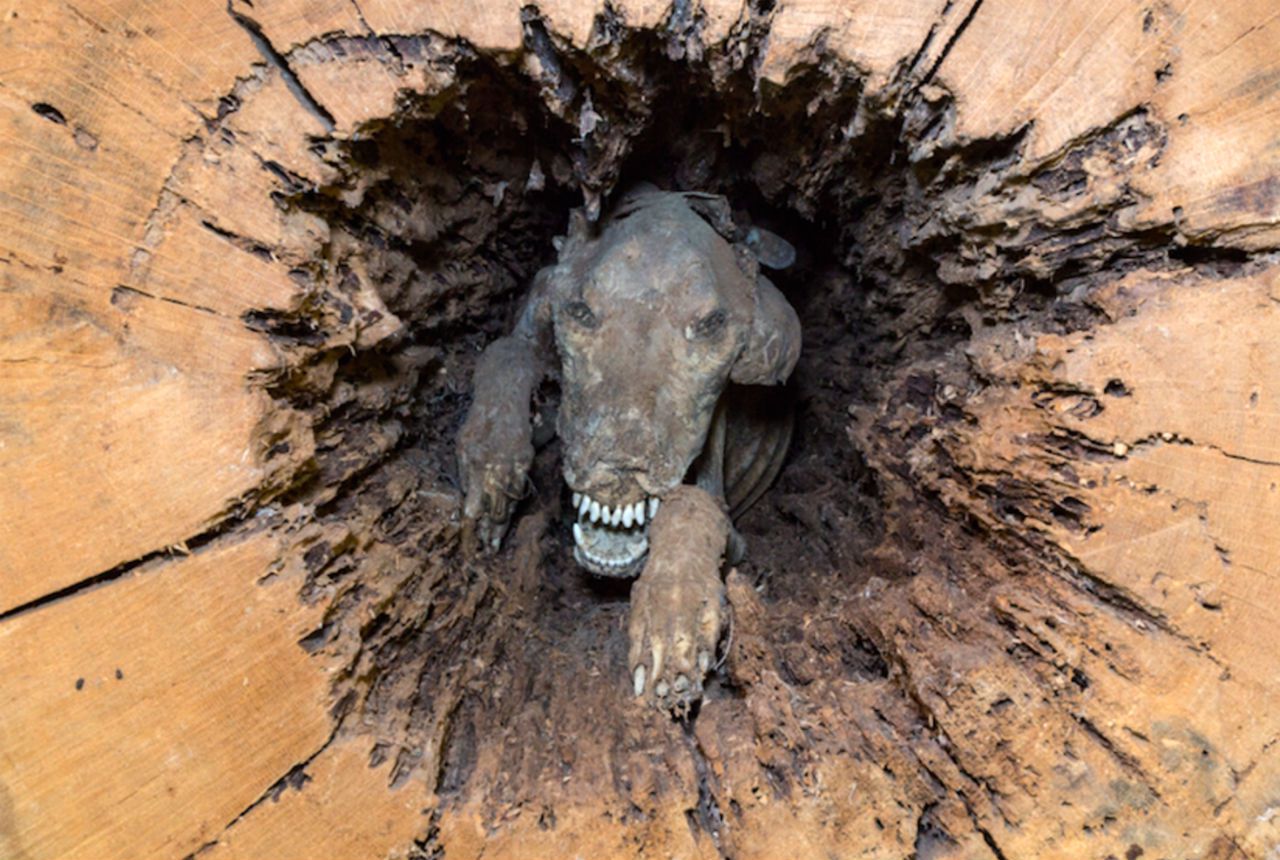 And In 1980, loggers found something incredibly creepy in the hollow trunk of a chestnut oak tree. And fans began to call the thing “Stuckie.” Because it became something of a roadside attraction in Waycross, Georgia. So how did this thing, whatever it is, end up in that tree in the first place?

In 1980, a group of loggers working for the Georgia Kraft Corp. happened upon a strange thing hidden inside of a chestnut oak tree that was being loaded onto a lumber truck. The inside of the tree was actually hollow.

When one of the loggers looked into the hollow opening of the tree, he was shocked to find the mummified corpse of a dog inside. The animal was stuck in a position that made it appear as though it were fighting to escape.

Giving It a Name

For decades, the dog was simply called “Mummified Dog.” But in 2002, Southern Forest World held a dog-naming contest for it. The winning entry — “Stuckey” — beat out runners-up “Dogwood” and “Chipper.” It was eventually changed to “Stuckie” to avoid issue with the Stuckey convenience store chain.

Experts who’ve examined the dog estimate that it crawled into the tree at some point during the 1960s. In all likelihood, it was a hunting dog that had probably chased a smaller animal into a hole at the base of the tree.

Brandy Stevenson, the manager of Southern Forest World, says, “People always ask me, ‘How did he get in there?’ And I always say, ‘Well, he was a hound dog. Maybe he was after a coon.’ And then they'll say, ‘Poor old thing. I feel so sorry for him.’”

Unable to escape, Stuckie eventually starved to death inside of the tree. But instead of merely falling into forgotten decay, a very special set of circumstances led to the dog’s current state of mummified preservation.

Death in the Wild

Had Stuckie died out in the middle of the wilderness, chances are other animals would have come across its corpse and eaten it. Combined with its exposure to the elements, Stuckie’s body would not have lasted very long.

According to Southern Forest World, “A chimney effect occurred in the hollow tree, resulting in an upward draft of air. This caused the scent of the dead animal to be carried away, which otherwise would have attracted insects and other organisms that feed on dead animals.”

The type of tree that the dog got wedged into played a part in its preservation as well. The tannic acid of the chestnut oak helped to harden Stuckie’s skin. Coupled with the relatively dry environment inside the hollowed tree, it made for the perfect mummifying condition.

According to some of the literature at Southern Forest World, Stuckie is referred to as a “petrified dog.” But since he’s actually fully intact (as opposed to have been partially or completely replaced by sediment, like a fossil), he’s considered a modern mummy.

Cases like Stuckie’s are actually fairly common in our history. Weather conditions required to create what’s known as an “accidental mummy” — a mummy created by nature — are varied, but all have one thing in common: they’re extreme.

David H. Thomas, an archaeologist with the American Museum of Natural History in New York City, explains, “What you’re looking for is something extreme. It has to be really dry, or really wet, or really frozen, or really high elevation.”

When someone or something dies, natural digestive enzymes begin the process of breaking down the body. They need to be in an aqueous — wet — environment to work, so when a body’s environment lacks water, decomposition slows down.

In areas with extreme temperatures or pH levels, enzyme activity can be impeded, especially when bacteria and fungi are also kept from growing. Certain clothing can affect the mummification process as well, working to help absorb bodily fluids away from the skin.

In order for a body to be preserved in ice, it requires an initial freeze-drying before it’s fully encapsulated. Freeze-drying occurs near the surface of the ice and allows for the body to begin the mummification process before being buried in the ice itself.

One of the most famous natural mummies ever discovered is Ötzi the Iceman. His mummified remains date back to about 3300 BCE, and they’re so well preserved that modern scientists have been able to find evidence of his last meal, as well as parasites and other ailments he suffered from prior to his death.

Largely regarded as one of the best preserved mummies ever discovered, La Doncella, or “The Maiden” is a teenage girl who died more than 500 years ago in a ritual sacrifice in the Andes. Her body was found along with two other children, having been left on a mountaintop as an offering to the gods.

The catacombs in the crypt underneath the Church of St. Casimir the Prince in Kraków have climate conditions that have allowed for the preservation of nearly 1000 bodies since 1667. The mummified bodies can be viewed by the public once a year, on All Souls Day.

Following a cholera outbreak in and around Guanajuato, Mexico in 1833, the bodies of over 100 victims were disinterred from local cemeteries due to a “perpetual burial” tax. They were stored in a nearby building, in a climate that allowed for natural mummification. Today, the building is the El Museo de las Momias (“The Museum of the Mummies”).

Bog bodies are those that have been mummified in peat bogs. The best preservation conditions occur in colder areas near bodies of salt water. When old peat is replaced with new, humic acid is released, which essentially acts as a pickling agent.

One of the best examples of a bog body, the Tollund Man was discovered in 1950 on the Jutland peninsula in Northern Europe. Having died during the 4th century BCE, his body was so well-preserved that it was initially mistaken for a recently deceased corpse.

The Tarim mummies were discovered in present-day Xinjiang, China and date back to between 1800 BCE and 200 CE. They’re of Caucasian descent, which challenged the idea that there was little to no cultural exchange between the East and West during that time.

In the late 20th to early 21st centuries, the mummified bodies of buddhist monks were discovered, having died from participation in starvation and suffocation rituals. The monks would have adhered to a diet made up of salt, nuts, seeds, roots, pine bark, and poisonous tea, which would result in self-mummification.