Harvey Shepherd
Mysterious Band Performing in The Subway Station Leaves Crowd In Awe After Taking Off Their Disguise June 24, 2019Leave a comment 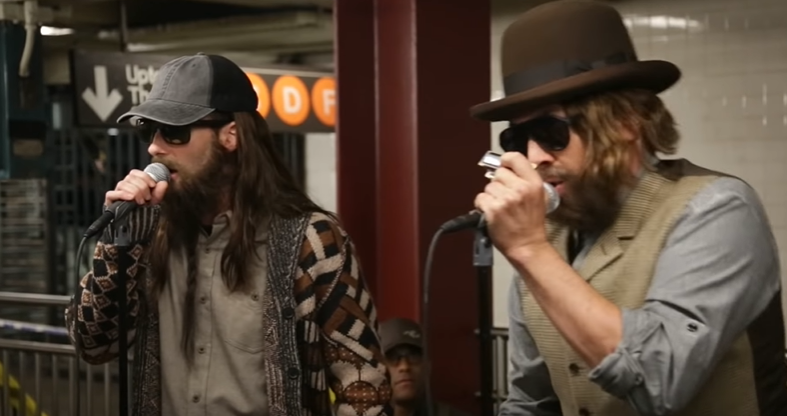 One of the first things that people learn when they move in New York City is that the subway station is always packed with performers who are trying to follow their dreams. However, sometimes a special band comes along that leaves everyone in awe. This is exactly what happened a while ago when one of the world's most famous bands got covered in makeup and started performing anonymously for everyone in the subway station.

New York City is the place where everyone goes to follow their dreams and there is no doubt about that. This is why the city is packed with talented people, especially singers and performers.

As previously mentioned, the subway stations in NYC are packed with artists who are giving the performances of their life. They want to get some attention and what better place to do it in?

Even though all musicians who are performing in the subway station make great music, there are some bands who simply blow everyone away. This is exactly what you are going to see today!

A video was uploaded on YouTube with a mysterious band performing a bunch of incredible songs in the 50th station, right beneath Rockefeller. This video went viral and you will soon find out why.

The video starts off with a mysterious band singing. They were playing a great song but unfortunately, no one stopped to even bat an eye.

While no one paid any attention to them at first, people stopped moving when they heard the lead's singer voice. He is super talented and everyone could spot that.

Even though no one was stopping to listen to the mysterious band, the band members were having the time of their life. Isn't this what making music is all about after all?

It didn't take long for the mysterious band to gather a crowd. The lead singer's voice was so mesmerizing that people simply had to stand and listen to the song.

The thing that made so many people stop by and listen to the mysterious band is the fact that the lead singer's voice sounded familiar. People knew that they heard it somewhere else, they just couldn't figure out where.

The mysterious band knew that if they played their most popular songs, then people would know who they were. This is why they were playing something that's entirely different from what people are used to hearing from them.

When the mysterious band first started playing, only had one or two people stopped to listen to them. Now, they had more than one hundred people sitting close and enjoying their music. Something special was going to happen and everyone could feel it.

9. A Round of Applause

Everyone started clapping when the mysterious band finished the song and while this was going on, one of the band members started revealing his true identity.

One of the band members started taking off his special makeup and no one could believe what they were seeing. He was Jimmy Fallon!

To everyone's surprise, the other band members were none other than Maroon 5. Can you believe that?

After Jimmy Fallon and Maroon 5 revealed their true identities, they decided to give everyone a gift and they started playing some of their most famous songs.

As you can surely imagine, the crowd was going crazy. They would've never guessed that they were going to start off their mornings by going to a live concert performed by Maroon 5.

We have to give praise to both Jimmy Fallon and Maroon 5. This is an awesome surprise for their fans and no one expected a famous band like Maroon 5 to perform in the subway station.

The people who arrived in the 50th Subway station are lucky and there is no doubt about that. They got to enjoy a private Maroon 5 concert!

2. The Crowd Sings Along

One of the most amazing things to happen during the performance was when the crowd started singing along Maroon 5. They knew every single lyric!

If there is something that we can be sure about, then it has to be the fact that this was an amazing prank. Let's hope Jimmy Fallon decides to do this with other famous bands as well.