Camila Villafane
No One Wanted to Adopt This Dog With a Deformed Face Until One Family Changed His Life October 1, 2018 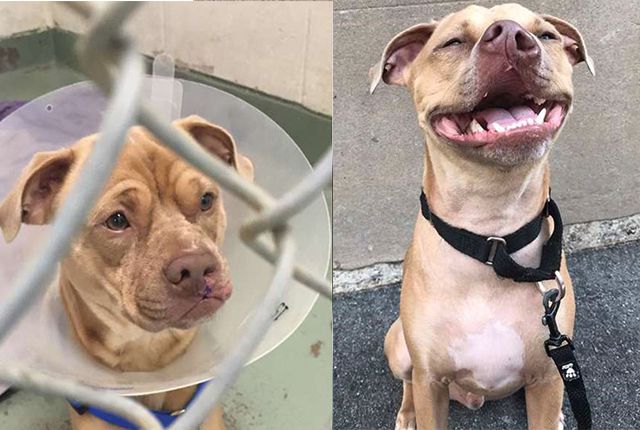 Most people love the idea of adopting a dog just as long as they’re cuddly, lovable and cute. But everyone’s hearts turn cold the moment they see a dog with a weird nose or some other form of strange birth defect. That's why one dog with the sweetest heart couldn't find a forever home: because of his unfortunate facial deformity. But against all odds, the dog finally managed to win his owner over. You won't believe the heart-warming story of how one family managed to turn things around for this adorable pooch...

Clefford’s a dog with a cleft palate deformity, and he wound up on the streets when his human family became homeless. They had no choice but to give him up to a rescue who could give him a better life. But it wasn’t easy.

Clefford’s family took him to Angell Animal Medical Center in Boston. Then, MSPCA-Angell put the pooch up for adoption. But despite losing his family, Clefford managed to stay upbeat.

He Kept His Spirits Up

Clefford’s condition prevented him from eating regular food, so he needed to eat things that wouldn’t hurt his mouth. But he remained as cheerful and lovable as ever, which is how he found his new human dad.

Will Stoltenberg had been working with the rescue for nearly a year when Clifford walked into his life. And it was love at first sight. Soon, he started spending a lot of time with the pooch, and eventually, he realized that Clefford was destined to be his pet.

Clefford had been in the shelter for about three months. "I was drawn to him because I wanted to be able to help him overcome his 'disability,” Stoltenberg told E! News exclusively.

I Can Show You The World

“I wanted to show him that the world is filled with fun and possibility,” said Stoltenberg. It became his life’s mission to make sure that Clefford had a fantastic life.

It Could Have Been Worse

The gap of Clefford’s cleft palate affected his nasal passages. This created a serious health issue because he could have developed a lung infection. “Frankly he was lucky to survive puppyhood as the cleft can cause problems in nursing."

Clefford’s condition could have been far worse than anyone had anticipated. He was prone to some serious infections. So, before Stoltenberg could officially adopt him, the pooch had to undergo surgery.

The Cone Of Shame

Stoltenberg claimed that Clefford was slowly recovering from the surgery. He even posted after photos, one of which had the pooch wearing a cone of shame so he wouldn’t scratch his stitches.

He Was Scared Of Everything

When Stoltenberg brought Clefford home, he noticed that the dog was scared of vehicles, women, skateboards, and even other dogs. But eventually he taught the pup that the world wasn’t scary place after all. A year later, he was like a completely different dog.

It’s Not Over Yet

"He has one more surgery still coming up to remove some teeth so he will be resting it off for another couple weeks, unfortunately," added Stoltenberg. Meanwhile, Clefford is adjusting to his life with his human dad.

Adjusting To His New Home

After the surgery, Clefford was like a brand-new dog. "He seems much more playful and affectionate now that he has a calmer, more open home," he explained. But the pooch is already destined for a higher purpose.

Once the dog with a cleft palate has fully healed, he’ll have a huge responsibility. "With his future as a service dog, I expect he will continue to change and feel the better for it".

A Message To Potential Dog Owners

There’s no such thing as a bad dog. They all have lovable qualities that often outweigh the frustrating ones. Stoltenberg added that “if you treat a dog right any one of them will love you in return regardless of breed."

Use your heart and your mind if you’re unsure about buying or adopting a pet. Adoption will set you back $50 to $200 whereas buying a pet can cost you $500 to $1,000. And there’s another downside to buying one.

The Pros And Cons

If you buy a pet, you’re turning your back on a homeless furry creature that probably has less chances of finding a home. If you choose to adopt, you’re not only saving a life, but you’re giving and getting the gift of love.

You Get More Love

You’ll likely get tons of extra love from an adopted pet who is loyal, smart, and just as adorable as a store-bought pet. But first you’ll have to get over your fears and uncertainty about adopting a rescue.

Damage From The Rumor Mill

The rumor mill often spins lies like the fact that dogs that come from animal shelters are physically unhealthy, and/or emotionally damaged. That’s not necessarily true, but there are exceptions of course.

There’s no way to guarantee that your pet will not have health problems. And if anyone knows this, it’s Dr. Evan Antin, who adopted a shelter pup. But in his experience, most of these health issues are easy to handle.

According to Dr. Antin, most adopted pets suffer from kennel cough, skin conditions, and parasites. But all of these issues are easily treatable, and they shouldn’t stop anyone from adopting. But what if the problem was more serious? Would you have the heart to adopt an animal with a birth defect?

The Issue With No Tissue

Cleft lip and cleft palate are oral deformities that occur while a fetus is still in the womb. It’s caused when the mouth or lip area doesn’t have enough tissue to form properly. And that’s just the beginning of this nightmare.

The Gap Is No Fun

A cleft lip causes the two sides of the upper lip to separate, leaving a gap that extends above the base of the nose and affects the upper jaw bones and in some cases, the upper gums too. But not all clefts are created equal.

The Different Kinds Of Cleft

Scientists believe that genetic and environmental factors play a role in the formation of clefts. But the odds of a cleft increase if a relative has had this issue. But there’s another way a pet can develop a cleft.

If a mother dog is exposed to chemicals or a virus while her pups are in the womb, this could cause a cleft palate to develop. But regardless of the reason, the outcome for these dogs is grim at best.