The Last of the Whales Have Been Freed From Russia’s Notorious “Whale Jail”— But Where Are They Going?

Alex Shea
The Last of the Whales Have Been Freed From Russia’s Notorious “Whale Jail”— But Where Are They Going? December 2, 2019Leave a comment 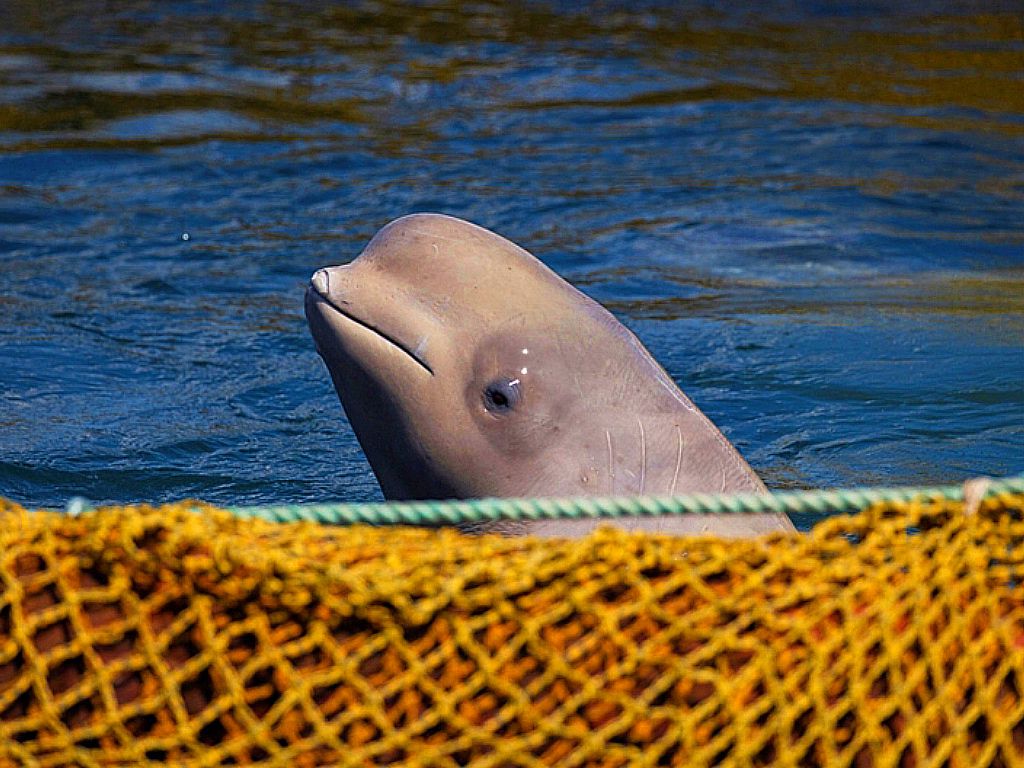 After being discovered in 2018 by a couple of conservationists flying a drone off of Russia’s Far East coast, these whale enclosures went viral. Activists, celebrities and animal-lovers everywhere were outraged.

The whale enclosures, which were coined Russia’s notorious “whale jail”, have since been deemed illegal. Each and every whale has been released back into the wild. And the company in charge of these ridiculous whale enclosures suffered a 28.1 million ruble fine—the equivalent to $432,000 in the U.S. But are these whales any safer than they were before, or is this terror bound to happen again?

Off the Far East coast of Russia lays Srednyaya Bay. It's a facility owned by four Russian companies in charge of capturing and delivering marine animals to Russian aquariums. These four companies have been suspected of criminal activity concerning the welfare of roughly 100 whales in what's been coined as a "whale jail."

In November of 2018, conservationists shared drone footage of what could only be described as whale enclosures. What they didn’t expect was the video to go viral. And they certainly didn’t expect to have an international uprising on their hands.

Activists everywhere were outraged at what they could only assume was the inhumane treatment of whales in the enclosures. Activists weren't the only ones upset. Anyone scrolling around on social media who happened to find this video couldn't help but to be outraged, too. Turns out, civilian anger is also what brought an end to SeaWorld's live orca shows.

The Captors Would Be Held Accountable

There's a good chance the companies in charge of the whale enclosures would have gotten away with capturing and holding wild marine animals like this if it weren't for the information-age we live in. Information from all over the globe is at our fingertips, which is a good thing for these whales.

A Record Number of Captured Whales

The whale jail held 11 killer whales and 87 beluga whales. This magnitude of marine mammals caught set a record for the four companies involved: Oceanarium DV, Afalina, Bely Kit and Sochi Dolphinarium. These companies remained unregulated and untouched for the amount of time it took to capture roughly 100 marine mammals and stuff them into pens.

Killer whales are commonly known as orcas. They're the marine mammals you probably recognize from any marine themed amusement parks, like Seaworld. Although they're commonly mistaken as whales because of their name, they're actually rather large dolphins.

Beluga whales are an arctic cetacean. It's closely related to the narwhal. Their white color makes them most unusual in the whale community. Belugas are known as the canaries of the sea, making them highly coveted in the poaching community.

The Conditions They Were Kept In Were Horrifying

All of the marine mammals were kept in very small pens that harmed their wellbeing. Although these were very different marine creatures, they were held and treated the same, making their environment uninhabitable. Beluga whales roam the ocean miles at a time to keep warm. Orcas, on the other hand, don't just roam— they migrate south for the winter to avoid harsh, cold waters.

Aside from the viral essence of the video reaching thousands of people across the internet, the video caught the attention of some very influential people. Celebrities and activists worked hand in hand to release these whales from the whale jail. Through the use of petitions, letters and demonstrations, everything that could be done, was done.

Pamela Anderson and Leonardo DiCaprio created petitions that campaigned for the release of the whales from the enclosures. They used their strong social media followings and influence in society to educate people on the issue at hand. Pamela Anderson is an active member of the International Fund for Animal Welfare (IFAW) while Leonardo DiCaprio has traveled to Russia to speak on behalf of other wildlife matters, giving them the credibility to represent the issue.

And So Did Cousteau

Jean-Michel Coustaeu, the son of the famous environmentalist Jacques Cousteau, was another force to be reckoned with when the video footage of the enclosures went viral. He is currently the spokesperson and founder of Ocean's Future Society. After seeing what was being done in Srednyaya Bay, he wrote a letter to President Putin which prompted an invitation to visit the region the facility was located in.

It Reached the Russian Government

President Vladamir Putin is known for his advocacy of wildlife conservation and was receptive to the criticism the video was receiving. The situation just needed to be brought to his attention. When it was, he had his government investigate the whale enclosures.

The End Was Brought By Legal Technicalities

According to international law, capturing whales is technically legal if they're captured for scientific, cultural, or education purposes. It is not legal, however, for whales to be captured for commercial exploitation. Allegedly, that's what these four companies had in mind as they were capturing killer whales and belugas.

In China, there has been a boom in the Orca park industry. Over the past 5-years, the marine park industry has grown in popularity. Apparently 250 “wild-caught cetaceans” were transported to Chinese theme parks in the last 10 years alone.

Orcas Have a High Price Tag

An individual orca whale is worth $6 million on the Chinese black market, according to The Telegraph. If you consider the increased demand for whales due to the rise in marine amusement parks in China, then you begin to wonder if it's just coincidence. There are already 60 marine amusement parks in China, with roughly a dozen more under construction.

The Entire Orca Population is at Risk

The influx of whale capturing isn't lost on everyone. Greenpeace Russia outreach coordinator, Organes Targulyan, claims that at the rate the orca population is being captured, their entire population is at risk. For every orca captured throughout the year, 13, another orca is killed— giving us a grand total of 26 orcas in a year.

A criminal investigation went into effect in November of 2018, per Putin's request. The four companies responsible are Russian firms that supply marine animals to Russian aquariums. The only illegal part of any of this is that they were suspected of exporting the whales to aquariums in other countries, notably China.

Checking the Health of Each Whale

In January of this year, Russian authorities invited veterinarians and marine mammal researchers to check on the wellbeing of the whales. In order to come up with a plan to release the whales, they had to know if the whales would make it in the wild. What they found was heartbreaking.

They're Meant to Be in the Wild

Whales aren't meant to be kept in captivity. Beluga whales swim for miles in the cold waters of the Arctic to stay warm. Killer whales (orcas) might be used to cool water, but they usually migrate south for the winter. These marine mammals are used to a much freer way of life that just wasn't provided by the facility in Srednyaya Bay.

Not the First Time They've Been Exploited

Unfortunately, this isn't the only time or the first time whales have been captured and exported for amusement purposes. The very beginning of whale capturing would have to be the "orca gold rush" in the 1970s when orcas were sold to newly forming amusement parks for profit— a large profit.

Since the "orca gold rush," the orca entertainment industry has become a billion-dollar franchise. Despite the laws and regulations put in place to protect marine mammals from being captured and exported, people have found ways around it. Which is the case for these four companies who figured a whale enclosure wouldn't raise any suspicion.

Good News for the Whales

The Whale Sanctuary Project has helped immensely in the coordination of releasing the whales. They first offered their recommendations after visiting and assessing the whales while they were still in captivity. The Whale Sanctuary Project remained in close contact with the institute in charge of the transport and release program until November of this year, which marks the final release.

Why They Were Released in Batches

One of the recommendations The Whale Sanctuary Project suggested was more time for the rehabilitation process. But time was of the essence in order to release all of the whales before the winter set in again. The batch process that the whales were released in made it easier to give certain whales the extra time they needed to rehabilitate and prepare for release.

Overall, it has taken a few months to complete the transport and release of the roughly 100 whales that were previously imprisoned in Srednyaya Bay. But with the help of activist groups like The Whale Sanctuary Project, a horrid situation was solved. The final release of whales was completed on November 10. No more whales remain in the whale jail and hopefully, none will ever be there again.