Meet Obie, the Obese Dachshund Who Lost an Insane Amount of Weight 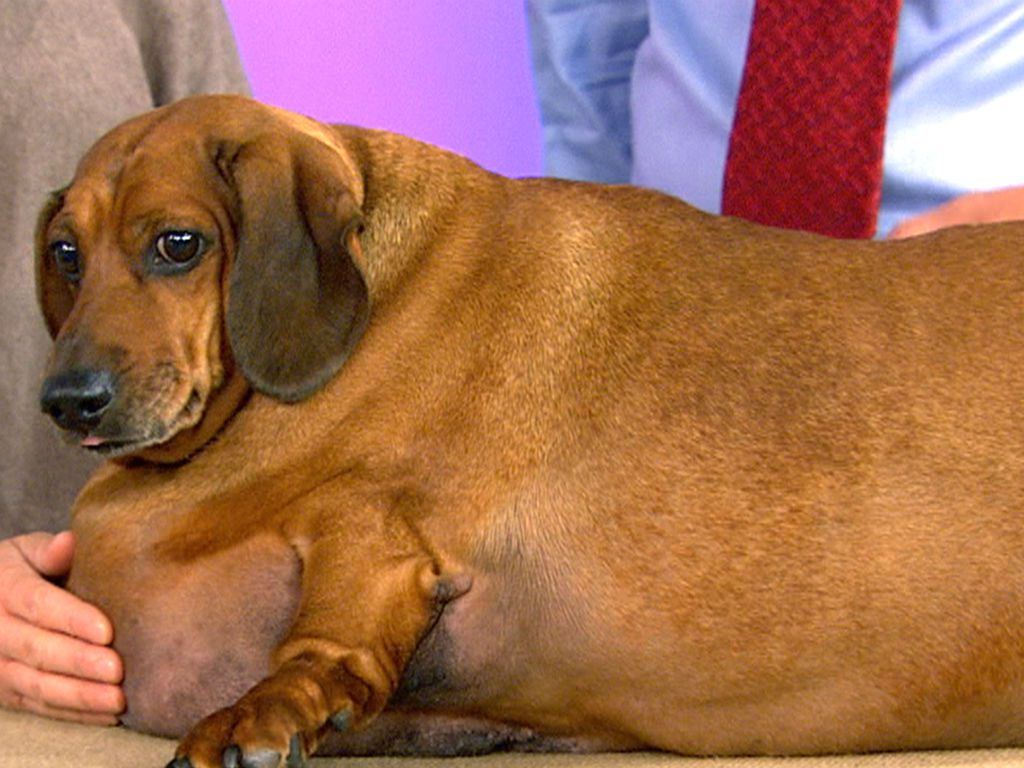 Dachshunds are relatively small dogs with an ideal weight of around 24 pounds. Obie, one of the world's most famous formerly fat dogs, weighed an eye-popping 77 pounds, more than three times a healthy weight for his breed. Check out Obie's weight-loss journey...

Road to a Better Obie

Nora Vanatta adopted Obie in 2012, and as of today, he’s approximately 13 years old and living his best life. Obie weighs 22 pounds and has maintained this healthy weight for nearly 6 years. But that wasn’t always the case.

He Was Twice His Size

Before Vanatta came into the picture, Obie was living with an elderly couple who overfed the poor little dachshund. Unfortunately, the dog’s lack of exercise caused his weight to skyrocket to 77 pounds. That’s twice the normal weight for a dog his size.

An Intervention Was Needed

At one point, a family member of the elderly couple contacted an animal rescue group to assist in finding Obie a better forever home. And that’s when the dachshund and Vanatta finally met.

Vanatta is a Total Pro

Vanatta is a certified veterinary technician. She also has a degree in animal sciences. So when she heard of Obie’s weight situation, she was more than happy to take him in August 2012 to help turn him into a better, healthier, and happier Obie.

It’s All in the Diet

Vanatta is the first to tell you that you can’t force an obese dog to exercise. But you do have power over what you feed him. “It was 90% diet with Obie and barely any exercise,” she wrote on the Facebook page, “Obie Dog Journey.”

Only a Vet Could Help

She fed him Purina Veterinary Diet OM. The OM Overweight Management Canine Formula is only available through a vet. It contains dietary protein that boosts the metabolism to burn off excess fat and helps pooches feel full.
The OM formula is "a high protein-to-calorie ratio diet that will help Obie maintain lean muscle mass while burning his excess fat as energy," she explained on her Facebook post.

Obie’s overweight issues required an assessment of his health to rule out any medical conditions. So, Vanatta worked hand in hand with a veterinarian to make sure her little furball would lose weight safely, (which is 1% to 2% a week) while still getting all the nutrients he needed.

She Couldn’t Deprive Him

Vanatta warns that reducing the amount of food given to a dog isn’t the right way to go and can lead to health issues. So instead, she recommends a specially formulated diet that includes high-quality dry kibble as a maintenance diet.

It was impossible to know for sure how many calories Obie had been consuming before. So, the first month of his diet was sort of like a trial to figure out what his energy requirements were.

She Rationed His Kibble

She figured Obie probably needed somewhere along 500 calories a day, so she split the kibble into 4 meals and then transitioned him to two meals per day. She only adjusted his calorie intake twice during the first year.

The Road to Health

Vanatta also fed Obie healthy meals like apples, carrots, and a variety of vegetables. But he helped himself to treats in the backyard like blackberries and plums, every now and then. And during his first year of rehab, Obie lost a whopping 50 pounds.

The Pounds Melted Away

Obie's weight goal was originally 25 pounds. So, with the help of his new diet and all the new daily activities Vanatta introduced into his life, the pooch started shedding more and more pounds.

Vanatta realized that Obie wasn’t an active dog, but she encouraged him to walk around the block and play in the backyard with her other dogs, too, instead of lounging around on the ground all day.

By the spring of 2013, Obie had lost so much fat, he wound up with tons of extra skin, which made it difficult for him to play and run around with his fellow pooches. So, in April 2013, he went under the knife to remove all the extra skin.

After he had recovered from surgery, Obie was a shadow of his former self, and without all the excess skin, he was free to play without anything holding him back. But to be honest, his human mom couldn’t have stopped him if she tried.

Pet lovers are head over paws with the adorable dachshund’s weight-loss success story. So Vanatta has kept people updated on Obie’s progress on the Facebook page “Obie Dog Journey.” The page currently has more than 390,000 followers and approximately 400,000 likes so far.

On August 4th, 2019, Obie and his adoptive siblings went on an overnight camping trip. Vanatta wrote on Facebook that Obie didn’t do any hiking that day because, at his advanced age, he’s not a huge fan of walking, especially when it gets too hot.

With an estimated 54 percent of dogs and cats suffering from obesity in the United States, Vanatta is hoping Obie’s journey towards a healthier self will inspire pet owners to do what is best for their animals.

The Wheeled Around Beagle

Obie wasn’t the only dog who struggled with weight issues. Kale Chips is a beagle who weighed 85 pounds, which was way too much for his legs. So, he was often wheeled around in a wagon. Now he's living and loving life after losing 22 pounds.

Daisy the bulldog from Middlesbrough, United Kingdom, weighed 28.3 kilos, which was 50 percent more than she should have weighed. But with the help of the PDSA Pet Hospital’s Pet Fit Club, her owner, Gillian Turrell, got Daisy on the treadmill and helped her lose 27 percent of her body weight.

Jack, the Cavalier King Charles Spaniel, weighed 45.2 pounds, which was twice his ideal weight. He could barely walk and was panting all the time because he was 105 percent overweight.

But in just 6 short months, he lost 7.9 inches off his waistline and 14 pounds. That’s 31 percent of his body weight thanks to PDSA, the United Kingdom’s veterinary charity.

Strudel’s owner had passed away, and on top of that, the obese golden retriever weighed 81 pounds when she was taken to the Hearts for Hounds animal rescue. But she had a tough time walking because of her inflamed joints.

John and Kristy Cotthaus, who own the Zoom Room in Virginia Beach, Virginia, saw Strudel and volunteered to train the pooch. They also worked with a vet to give her a proper diet to get her back on track.

Fit And Loving It

The golden retriever was willing and able to work with the couple and eventually lost 25 pounds. So now that she was fully healthy again, she was free to look for a forever home.