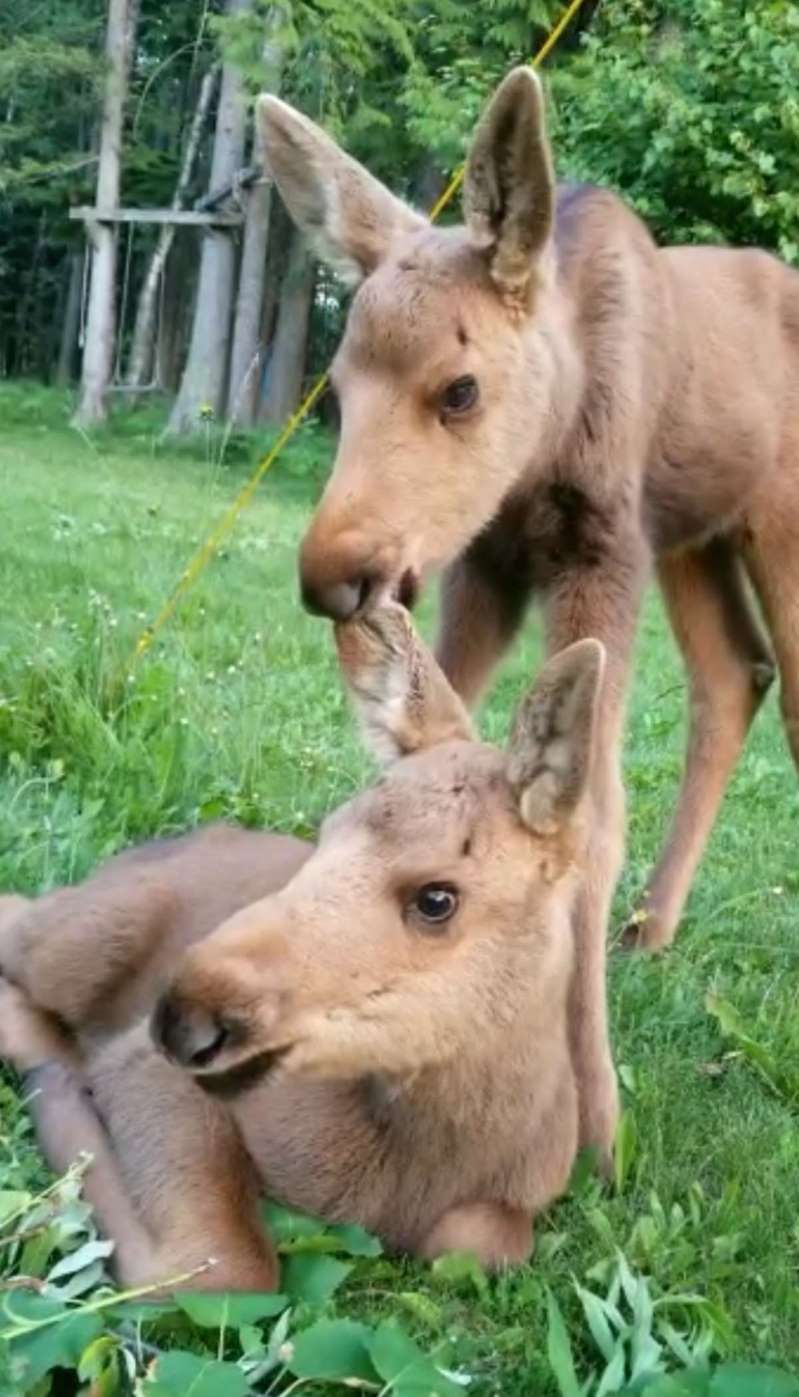 If your house is located close to the woods, then you will always have fresh air, beautiful scenery and a great place to go for a job. On the downside of things, you might have unwanted visitors knocking at your door in the middle of the night. This is exactly what happened to a family from Canada when two moose siblings appeared in their backyard.

If you like reading great stories and seeing heartwarming pictures, then you have arrived at the right place because today we are going to show you how a family from Canada decided to adopt two moose siblings who were in need of a home.

A family from Canada who lives close to the woods was cooking a barbeque in the backyard when some strange noises started coming from the bushes. To everyone's surprise, the animal making the noises was a baby moose.

After playing for a couple of seconds with the little moose, another one showed up. The family couldn't believe what they were seeing! The second thought that came to their mind was where is their momma?

One of the family's members knew that sadly, a moose was recently euthanized because its legs were broken and the animal's chances of making it in the wild were slim. This meant that the two baby moose brothers are orphans.

After realizing that the two moose brothers don't have anyone to care for them, the Canadian family decided to help out. They adopted the two animals and started caring for them.

"The calves were not going to survive long in the woods without their momma," said one of the family members. This is when they knew that they had to adopt the two moose brothers and keep them around until they grow bigger.

Moose are protected by law in Canada and this is why the family visited the British Columbia conservation office and ask for permission. Luckily, the animal rescuers told the Canadian family that they can adopt them for a short period of time.

As you can imagine, taking care of the moose brothers is not as simple as taking care of a stray dog or cat. This is why the family decided to visit a nearby veterinary and ask for professional advice on what to feed the orphaned animals.

Even though Chocolate and Clover were having the time of their lives, they are not house pets. This is why the Canadian family needed to find a special animal rescue center that would adopt them and provide them with a home.

Fortunately, it didn't take long for the family to find an adoptive home for Chocolate and Clover. The two moose brothers were taken by the Northern Lights Wildlife Society's sanctuary in Golden, British Columbia

"The moose stayed with my family for five glorious days," Lee-Ann Kramer. "Sleeping in my boot room at night, playing outside all day, bottle-fed goat milk every few hours and grazing freely on forest vegetation."

Chocolate and Clover are not going to spend the rest of their days at the animal rescue center and instead, they are going to be set free once they grow big and strong.

We have to give praise to the Canadian family who decided to go out of their way in order to help two orphaned moose babies. They are good people and there is no doubt about that.

If there is something that we can be sure about, then it has to be the fact that Chocolate and Clover got really lucky to find their way to the family's backyard. Although, the barbeque smell surely helped.

The family members are saying that saving the orphaned moose brothers was also a great adventure for them too. They always see moose running through the forest but now, they finally got the chance to meet two of them.

Moose are majestic animals and there is no doubt about that. This is why they are protected by law and also why the Canadian family decided to help out the two moose brothers when they saw that they don't have a momma to take care of them.

Let's hope that Chocolate and Clover will go big and strong so that they can live a great life running free in the woods.

Even though Chocolate and Clover might miss their mamma, they at least got lucky and were saved by a group of good people.