Tammy Salt
Peg The Duck Can Waddle On Two Legs Thanks To What These Students Did October 10, 2018 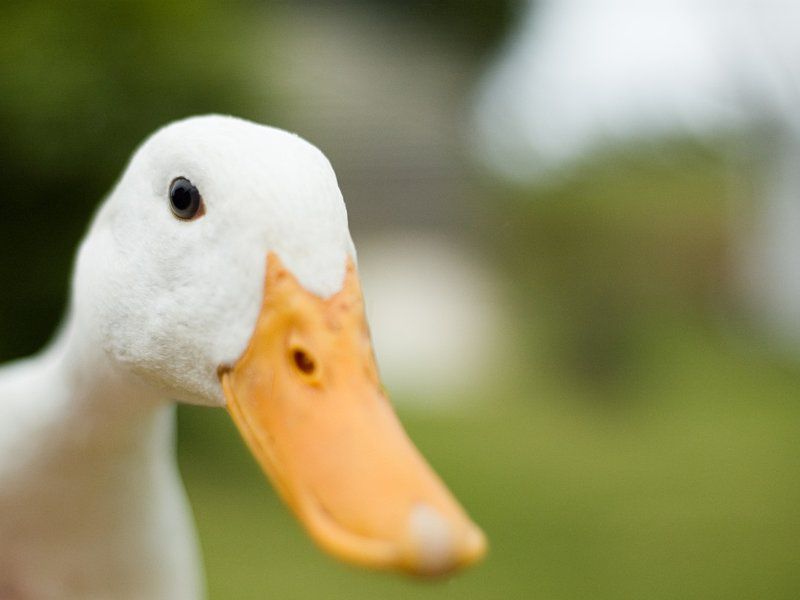 When young minds come together to save an animal’s life and help it walk again, we can only cry happy tears, like this woman did when she saw her duck run on the green field! Here’s a story where technology and kindness worked hand in hand to help Peg the Duck walk. And the people who made all of this happen were not surgeons or prosthetics experts. The saviors are children from a rural school! Not only did they become heroes, but also famous! Here's how they managed to help this adorable duck run again.

How did Peg the Duck got so famous overnight? Let’s check out the entire story and meet the young heroes that helped this Indian Runner Duck to, well… RUN!

The story began when Patsy Smith found a tiny baby duck: “We found Peg sitting on the bank and he hadn’t been hatched long.”

28. The Duck Was in a Terrible Condition

Smith has been raising ducks for a long time, but she never saw a duck in such a rough condition. The poor baby duck only had a foot! “When I picked him up I noticed his foot was gone and was in horrible condition. Evidently a turtle had bitten his foot off,” concluded the owner.

Then, the baby duck grew older…

The duck grew and grew, but instead of getting used to walking on a leg, the now eight-month old duck had an irritated stump that was causing more problems. Smith had to do something, so she started contacting animal rescue operations to help Peg walk again.

Smith had no idea that a group of eighth-graders in Armorel High School from northeastern Arkansas would be the ones to save the duck’s life!

They had to take measurements of Peg's leg. Check out the duck waddling again in the grass!

Three students at the school, all of ages 14-15, worked together to create a new prosthetic leg for the duck.

Now the three students had a dream: help this duck walk again. But it was not easy!

Abby Simmons, Matthew Cook and Darshan Patel had worked in the past with technological tools and resources that helped them prepare for critical thinking and problem solving.

How did they find out about Peg?

23. Social Media to the Rescue

“We found out about Peg on Facebook. When he was a baby, he didn’t have a leg,” explained Patel. He added that with a 3D printed leg “he can run, and he wasn’t able to do that before the prosthetic.”

Their teacher, Alicia Bell, EAST Lab facilitator said this wonderful thing about their students and their abilities…

In their report, the students had one single goal, and they finally managed to achieve it:

"We are trying to make it just right, so he can run around like other ducks.” Patsy Smith couldn't contain her happiness!

21. VR and Technology For People With Disabilities

“We are creating transitional fields, virtual reality environments. One of our environments is a grocery store, so [the students with disabilities] can use a 3-D projector or 3-D googles,” said Alicia Bell, adding that these students can use the VR environment to practice walking and real life skills for the future.

Together with her students, Bell entered these projects and won a grant which enabled them to buy a large 3D printer.

Winning the grant in the “Sophistication and Innovation” category, the students got the large printer, which they used to create Peg’s leg! But creating a leg for a duck turned out to be a tough task, explained Bell…

Before the duck got his leg, the students spent months measuring from photographs and 3D printing different models.

Luckily, the school’s lab had a smaller 3D printer, and the students knew how to begin their project. You won’t believe how many designs they made for Peg’s prosthetic leg!

There was always room for improvement. So the students tried different approaches.

“We thought it was just going to be a shaft with a hole in it connected to a foot but it was much more complicated than that,” explained Cook.

17. Would This Design Work?

“We already were looking into ways of creating sophisticated creations with our 3D printer and we saw that we could do just that for a duck,” said Bell. In theory, it had to look like a Duck’s leg, but it also had to function like one!

It took the students 30 tries before they finally made the perfect leg for Peg. Will this one work for the Indian Runner? There was one way to find out... Here’s what happens next.

Peg the Duck is trying the latest design...

As you can see, Peg the Duck was happily testing his new leg and it seems it’s working fine! But wait until you see him running in the field and that’s when everyone breaks into tears!

The students went through frustrations and heartbreak, but after those 30 trials and errors, Peg had a new leg that was just perfect!

Bell added that the project motivated the students because “animals bring everyone together and this was just a great way to show how work in the classroom can impact real life.” It is a great beginning for young students to help more animals in the future…

13. Peg The Duck Bringing Tears to His Owners

Smith was speechless when she realized that help would come from a school with a 3D printing lab and a team of students ready to save Peg! She began crying when she saw him run around in her backyard.

What will happen next?

Thanks to these awesome kids, Peg can now happily waddle again, and although the journey was long and difficult, the students are now a lot more experienced in creating duck legs. But that is not the end of the story yet. Here’s what the kids will do next!

Peg might not be able to run and live up to his name as the Indian Runner, but he is more than happy that he can walk thanks to these amazing students and 3D printing technology. What will happen next?

The students at the Armorel EAST Lab have quite a 3D printing expertise and experience. Patel explained that they are now working on helping a local chicken by printing another prosthetic leg.

“They’re only in 8th grade. I feel like this is going to give them a lot of opportunities because they have four more years to get going,” said Bell.

As we can all see, this was only the beginning of their journey and all their hard work was rewarded with a happy duck waddling on the field!

Smith is also happy that technology has brought out the best in people.

Peg can walk and run, and Smith is grateful that the students did everything they could for Peg, thanking them for their efforts. This is what she said...

Smith said that she was “so grateful that there are people that truly care and they have gone out of their way to do all they can to make it as comfortable for the duck.” Peg is not the only animal to walk on a 3D printed prosthetics.

Simmons added that they were frustrated that the other legs didn’t perfectly fit, so they had to start over and over. The Superintendent at the school explained that the kids' "dedication to this project was amazing."

Here are two other similar cases: an adorable dog and a Toucan.

Thanks to the Irish Retriever Rescue (IRR) charity, Duke was found on the streets. He had a deformed paw and couldn’t walk. He was first sent to the pound and then got a foster family – the Browns, who couldn’t let him go and adopted him. But Duke wanted to run with his furry siblings…

4. CBM to the Rescue

Thanks to a research company founded by the University of Wales Trinity Saint David, Duke got a 3D printed “super leg” that allowed the pooch walk, run, strut on all fours, for the first time in his life. He had to learn how to walk first.

Mr. Brown said that Duke and his other dogs love playing and that even though the pooch had a tough start, “this is an absolute life changer for him, it really is. He can now walk on it, he can now run at a slow speed."

Now let’s check another kind of prosthetics for a Toucan called Grecia.

Back in 2015, a toucan was struck by some boys as the bird was feeding in Greece in the Central Valley coffee town. It’s beak was injured and the bird couldn’t eat or keep its balance. It lost its ability to sing too, so the bird couldn’t even mate because it couldn’t make mating calls…

A huge charity was gathered for the bird called Grecia. 3D printing and scanners helped scientists create a new beak for the bird, but they had to wait for the wound to heal. Grecia is now living in an animal sanctuary with other Toucans and is now a healthy bird which can sing again!