The Poshest Prisons You’ve Ever Seen 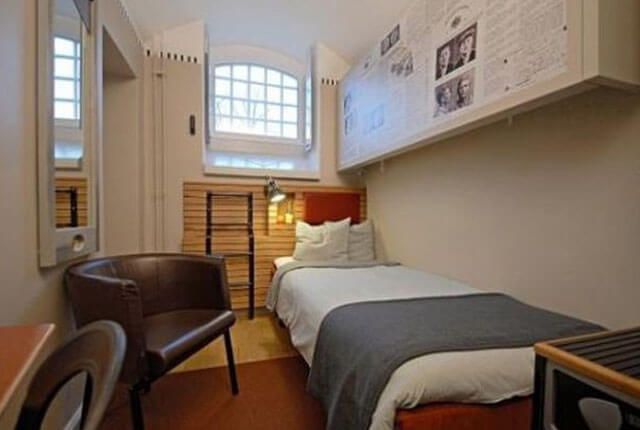 When you think of prisons, do you think of cell bars and barbed wire? Strictly regimented lifestyle, inmates packed into tight cells like sardines, and unforgiving, cruel prison guards? And do you think all prisons are exactly that tough? Think again. Because some prisons are even nicer than your crappy one-bedroom apartment. In fact, some of them are positively luxurious. These posh prisons have pools, gardens and even hair salons. Inmates learn trades and, carry their own keys, coming and going as they please. So here are the most posh prisons in the world.

Known as Camp Cupcake, this was home to Martha Stewart. There’s no barbed wire. Women start off in buildings housing over 125 inmates, but with good behavior, they are moved to cottages housing only 60 inmates. They’re are free to roam the grounds during the day as long as they sign out.

Buildings have TV rooms, a library and common rooms. Inmates can pay to access email. Other amenities include a chapel, an electronic law library, an education building and a hospital. Apprenticeship programs are offered for cooks, teacher assistants and electricians.

Inmates across California can pay $155 per night to upgrade from their current cell digs to Fremont Jail. The prison has widescreen TVs and gaming tables. Food, beds, bathrooms and cells are the same as other prisons, so inmates are just paying for the amenities and quieter atmosphere.

This federal prison camp is on the Maxwell Air Force Base, meaning there are opportunity to work on the base. Inmates also have access to the base's music room, pool table and craft room. Prisoners can take a number of correspondence classes from Troy State including art, music and foreign language.

Inmates spend the weekends walking tree-lined grounds with visiting family members. The prison is located close to Pensacola Naval Air Station. This means inmates can work cushier jobs – fraudster Mark Whitacre worked in an office with AC and even got to use the movie theater on base.

Her Majesty’s Prison Send in England

This posh prison has a Buddhist shrine and a nice gym. The all-women’s facility has one-bed cells and allow women to keep makeup with them. There is even an on-site hairdresser.

Inmates here can take art classes, play sports or play musical instruments. There is a giant library for prisoner use, as well. Inmates also have the ability to get a charity approved and leave the grounds to volunteer with a nonprofit, like Habitat for Humanity.

Prisoners at this prison camp can work toward earning an associates degree in business administration. They can also do apprenticeships in plumbing, photography and technology. For fun, inmates have access to pingpong, foosball and pool tables.

Federal Correctional Institution at Sheridan, OR

Inmates at this prison camp have the opportunity to learn a trade. They can be be trained in personal training, construction or landscape design. There's also a beautiful nearby inn for visiting family members.

The craft center here is insane – inmates can use leather and glitter and even make their own stained glass. They can also join intramural sports teams. All religions are catered to, too; there are services for Catholic, Jewish, Muslim and Native American faiths.

Prisoners in this Austrian complex reside in one-person cells with private bathrooms. These are in "pods" of 15 cells with a communal kitchen. Inmates wear their own clothes and are permitted to eat with metal utensils. The designer, Josef Hohensinn, is very interested in dignity of inmates.

This is a prison designed for families. It offers cells with cribs, private bathrooms, cartoons decorating the walls and access to a playground for kids. Inmates are allowed to have toddlers live with them until they turn three. Families must be in cells at night but are free to roam during the day.

Inmates here are encouraged to learn trades welding, hospitality, agriculture and carpentry – they can even earn industry-recognzied certificates. Prisoners are offered a variety of meal options depending on their diet: vegan, vegetarian and gluten-free.

At Kerava, there are no locks and no cells. All inmates applied to be there. They work in the greenhouse or doing construction, earn approximately $8 per hour, use cell phones, go into town to shop for groceries and even get three days of vacation every few months.

All 70 inmates pay rent. If they'd prefer to earn a degree instead of work, they have the option to study at a university in town. They even take field trips – supervised fishing and camping trips.

Locals can picnic at the prison in the spring, wander the greenhouse and pet bunnies that inmates care for. The open prison model has since been adopted by other facilities around Finland. Prisoners could escape but choose not to, knowing that they could be sent back to normal jail.

Another open prison, Bastoy inmates hold the keys to their rooms. Prisoners can fish, go to the beach and play tennis. They can use on-site saunas and they wear their own clothes. All inmates must work seven hours per day, like gardening and tending to livestock, and they are paid.

Halden is a 75-acre facility with no bars on the windows and fully-equipped kitchens. It boasts a woodshop for inmates who choose to take vocational training, and even a recording studio. The focus of Halden is to keep prisoners happy so they can rehabilitate and get back to society.

Inmates at this open prison have their own rooms and ensuite bathrooms. They also tend to gardens. Visitors are permitted to wander the gardens and even buy plants from prisoners.

The lavish cells here are only for those who bribe their judges, but they're still pretty baller. In 2009, an incarcerated former businesswoman was found to be getting cosmetic laser treatment. She reportedly had a comfortable bed, a large TV and even a karaoke machine.

Inmates at this prison are able to pay to use electronic tablets. While Internet access is restricted, they're permitted to download music and emails. They can even use the tablets to order food from the prison cafeteria.

Closed now, this prison was for convicted military officials. Prisoners had access to tennis courts, barbecues and even a pool. Inmates were allowed hot showers and lived in cabins filled with natural light.

Described by a former inmate as "like a five-star hotel," this prison is for high-ranking political convicts. Prisoners have couches, nice beds and private bathrooms. Cooks come from high-end hotels. There's even a beautiful garden to walk around.

Her Majesty's Prison Addiewell in Scotland

With a focus on rehabilitation, this is a learning prison. Inmates have the opportunity to learn and work full-time for 40 hours a week. Rooms are clean and bright with pops of color.

Currently home to Anthony Weiner, this prison specializes in inmates with medical or mental needs. It has green lawns, sports facilities and dorm-like housing for prisoners. Inmates can even take music or cooking classes.