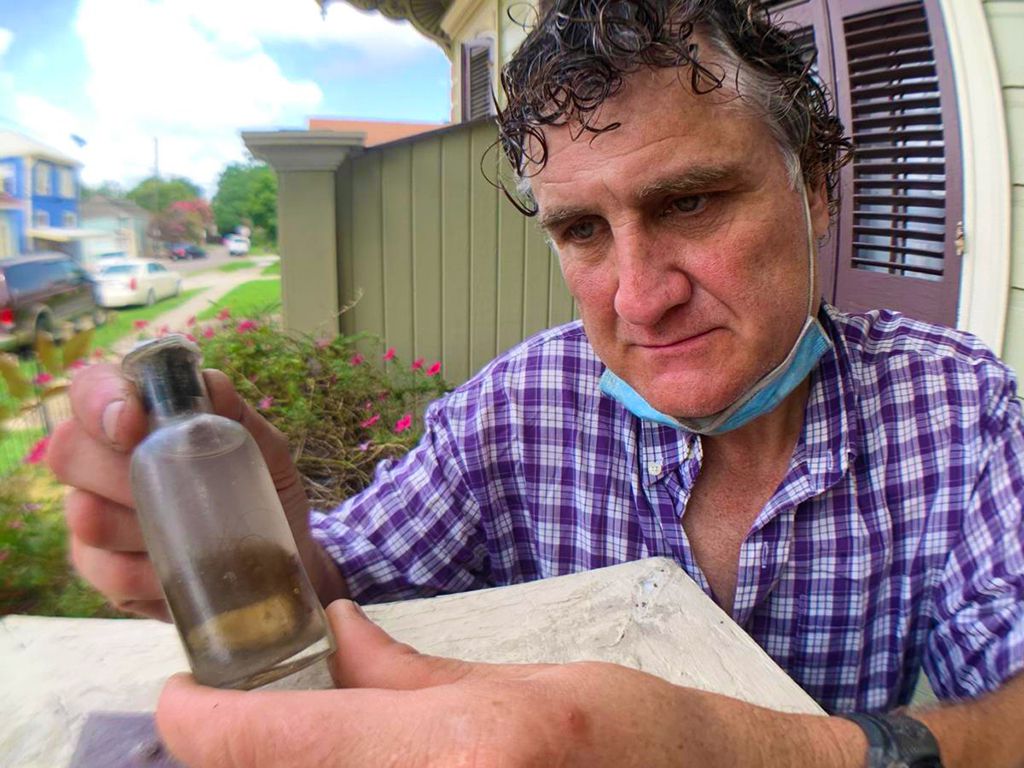 If there’s one thing Shane Mears knows how to do is go poking around in other people’s business, but there’s a reason for this madness. He’s a relic hunter, and loves visiting construction sites using a five-foot steel poker to find potential artifacts of New Orleans’ history. But one day, he unearthed something truly baffling.

As Mears dug, he hit something that was hard as a rock, but what caught his eye wasn't a natural piece of earth at all. He soon realized that he had nearly broken a bottle that was filled with a murky liquid. But he didn't yet know what the other contents of the bottle were and why they were so important to the person who buried the bottle in the first place.

He Used to Treasure Hunt With His Dad

In the 1980s, Shane Mears started visiting historic sites looking for treasure with his dad and there was plenty of it in Gentilly, Louisiana. But eventually, he moved to the city of Metairie before relocating to the state of Florida. But he didn’t stay there for long.

A Hurricane Lured Him Back Home

While living in Florida, Mears made a living as a car salesman. But when Hurricane Katrina struck Louisiana, he decided it was time to return to his home state of Louisiana and settle in New Orleans. But he didn’t start relic hunting just yet.

He Became a Bartender First

He started out as a bartender at a restaurant in the French Quarter, which left him with plenty of time to pursue one of his true callings--fishing. In fact, he goes by the name Cajun Swamp Whisperer because he frequents the Mississippi River looking for catfish. But this wasn’t his only pastime.

He Has Made a Ton of Discoveries

With the help of his trusted metal detector, Mears has uncovered over 100 cannonballs, as well as other miscellaneous items like the remnants of a carriage and even a belt buckle that dates back to the Battle of the Alamo. But technology aside, he seems to have a sixth sense when finding things.

He Has a Method

He always keeps his proverbial ear to the ground until he hears about a construction crew in an area. Then he visits the site after dark when there’s no one around and sticks a five-foot-long steel rod in the ground. If it comes up clean then he sticks the rod somewhere else until he hears a crunching sound. If that happens, he starts digging. But what does he do with the treasures he finds?

He’s Not Trying to Get Rich

Mears doesn’t go treasure hunting thinking he’s going to get rich. It’s more of a personal thrill for him which is why he doesn’t sell a lot of the items he finds. In fact, he explained what it feels like whenever he finds something. “There’s something about it. You’re back in time, in a time capsule by yourself, bringing these people back – these people who were forgotten.” But a special catch became an omen of what was to come.

Although he doesn’t consider himself overly superstitious, he certainly felt like he had received an omen when he caught a rare white catfish. But he had no idea how right he was until he set off on a mission to dig up his latest find.

On June 9, 2020, Mears’ latest adventure took him to Brooklyn Avenue by the west bank of the Mississippi River. The region is known to have ties to the voodoo religion which former slaves had practiced long ago. And there are many who still continue to pray to voodoo gods and practice the age-old traditions. But was Mears about to have his first encounter with something otherworldly?

He Got to the Construction Site

Mears arrived at Brooklyn Avenue, the site of several former homes. Now it was a construction site and Mears was eager to see if any of the people who once called this area home had left behind anything of value. So, he did what he was good at and started poking around.

He Unearthed Some 19th Century Items

Initially, Mears only found a few animal bones. But then, he discovered a 19th century laced-up women’s shoe. Had these items remained buried here all this time? He suspected as much and then he found something else among the items.

He Found a Vintage Bottle

Mears had found some rather odd-looking items in the area, but there was one that stuck out to him. It was some kind of bottle and it wasn’t empty. The liquid inside was murky but he was still able to see there was more inside the bottle.

The Bottle Had Creepy Contents Inside

Mears immediately noticed that there was a tooth and some human hair inside the bottle. And although he initially thought that this was some old custom equivalent to leaving a tooth under the pillow for the tooth fairy to find, he realized the purpose of this bottle was more ritualistic in nature.

Back in the day, the slaves of New Orleans would leave offerings to Ioa, powerful spirits they believed could control their destiny in their favor. But were these bottles a sample of those types of offerings?

He Suspected the Bottle Was Used in Voodoo

Suddenly, Mears put two and two together. “I had the sense it could be something voodoo-ish,” he explained. But he had to make sure, so he went to the one place where everyone goes to in order to find answers.

He Google Searched the Bottle’s Contents

Mears typed the words tooth, hair, and antique bottle in the Google search field and received search results related to a witch bottle. So, after doing a little more online digging, he discovered that a witch bottle was used as a “counter-magical device used as protection against other witchcraft and evocation.” He was so shocked that he told the whole world.

On June 10, 2020, Mears decided to share his incredible discovery on Facebook. He started by explaining where he found the bottle and how he believed it may have been from the 19th century. He also added that “such an object may have been used as a protection spell for the property. It also may have been used in voodoo to cast a different spell.” This sent chills down Facebook users’ spines.

It Was a Rare, Creepy-Cool Find

Mears described the bottle on social media as “rare, creepy-cool find.” But netizens on Facebook posted 1,300 comments, many of which suggested that his actions could have some serious repercussions in the world of magic.

He Was Warned to Leave the Bottle Alone

Mears was warned by a Facebook user that he might be cursed if he interfered with the bottle. “Best leave it to continue to do its work and stay out of the way,” they wrote. But he needed answers, so he reached out to a museum’s chief curator for enlightenment.

The Witch Bottle Was a First for the Museum

It was the first time Jason Wiese, the chief curator at the Historic New Orleans Collection Museum, had heard of a witch bottle. But he explained to Nola.com that: “I’m really curious about the nature of the object, if it indeed had a ritual or magic purpose.” But did another museum have the answers Mears was seeking?

Stephanie Mackin, the New Orleans Pharmacy Museum’s event manager and the rest of her staff were quite intrigued by Mears’ discovery, but had no idea about the history of witch bottles either. Fortunately, an expert in the mystical arts was able to shed some light on the subject.

There Are All Kinds of Jars

Sallie Ann Glassman, a voodoo practitioner was no stranger to witch bottles. “I’ve seen money jars and love jars, and jars to get people to go – bad neighbors and boyfriends – and to heal; all kinds of them.” And people reportedly continue to make these kinds of offerings just like the 19th century person who buried the jar that Mears found. But was it really the same kind of bottle?

The Bottle Was a Mystical Offering

Mears’ neighbor, Cathy Smith, who wrote a novel about New Orleans’ voodoo culture, knew a bit about witch bottles, but she called it a medicine bottle. And like Glassman, she too agreed that it was like an offering for something the original owner needed. But was this a unique find?

A Voodoo Relic is Not Uncommon

Smith explained that voodoo artifacts aren’t rare in New Orleans and neither is finding them. “People find charms in houses, under houses and in the walls.” But what would happen to the witch bottle now?

Mears Knew Where the Bottle Would Go

It made more sense to do what Facebook users had suggested and return the bottle to the site it was found in. But Mears had a bigger and better idea that would affect those in his family for generations to come.

He Wants the Bottle to be His Legacy

Mears considered turning the witch bottle over to a museum so his descendants could remember him whenever they saw it. “I was thinking of donating it to one of the museums. That would kind of be the best home for it. It would be neat if my grandson and granddaughter could go in and see what I did,” he told Nola.com.