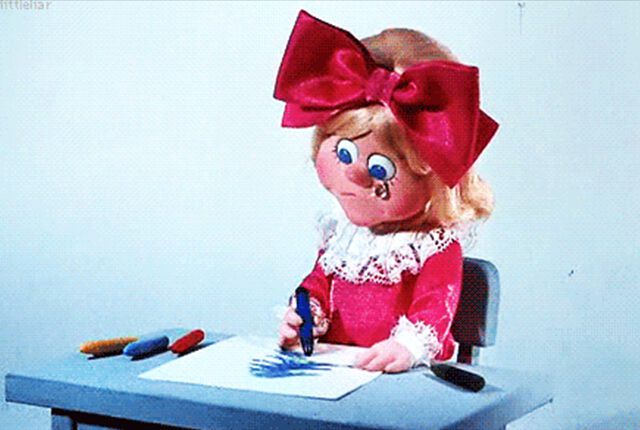 Christmas songs have already been taking over the radio airwaves for weeks now. And you may be sick of all the holly and jolly. So if you're looking for more "bah humbug" than Christmas cheer, give these sad Christmas songs a listen. Because they're low-key depressing AF.

We had to kick things off with the most depressing of the depressing. A little boy tries to buy some shoes for his dying mother in case she “meets Jesus tonight.” Who TF even thought this was OK? Because it’s just not. (Yep, that's Rob Lowe and Kimberly Williams-Paisley.)

“Have Yourself a Merry Little Christmas” by Judy Garland

If you’ve ever seen Meet Me in St. Louis, you know that this song has nostalgic, touching undertones. Judy Garland's character is singing to her 5-year-old sister because their family must move to New York City and leave behind their beloved hometown.

This one's pretty brutal in spite of Celtic Thunder's angelic voices. Set during World War I, opposing sides of a battle take up a truce on Christmas Day to sing together, share wine and cigarettes and look at photos with each other. In the morning, they're back to killing each other.

The video is absolutely delightful, full of forlorn former lovers in a snowy cabin with a haze of '80s magic, but the lyrics are sad, filled with regret and longing. George Michael’s death on Christmas Day 2016 adds an extra layer of poignancy.

A song about growing up and realizing what Christmas is really about, while also realizing that a lot of these more mature Christmas wishes may never come true. Note: This was originally recorded by Natalie Cole with another cover by Amy Grant, but we're using this version because Kelly Clarkson.

You know a song is depressing when it's only 15 lines of lyrics (some are repeated) and your heart is breaking. This one's about a little boy whose dad is dead, and he is sad because Santa didn't visit him on Christmas. Note: Another notable version is performed by Vera Lynn, but we are using Nat King Cole's version for that pure, velvety voice.

“All Alone on Christmas” by Darlene Love

Darlene Love asks the tough question: Where do lonely hearts go on Christmas? The imagery of Christmas in New York puts you right in the heart of the city, but even while you're surrounded by tourists, you can feel her loneliness. This was on the Home Alone 2: Lost in New York soundtrack, so if you want even more feelings, listen to it and think of little Kevin McCallister staring up at the Rockefeller Christmas tree all by himself.

“I’ll Be Home for Christmas” by Bing Crosby

Bing Crosby's seminal classic was originally written for soldiers who were fighting in WWII and would be away from their families during the holidays. Give it a listen and pay attention – it's written from the point of view of a soldier overseas. Once you know this information, the last line is that much more heart-wrenching: "I'll be home for Christmas/If only in my dreams."

Another song that barely even has any lyrics, but cuts right to your heart. Elvis croons with a melancholy edge to voice that touches anyone who's ever been alone on Christmas – and even those who haven't. For an added tearjerking bonus, just think about that scene from The Year Without A Santa Claus where the little crying girl is writing to Santa.

The lyrics of this woe-is-me Christmas song are extra pathetic because the poor guy (Charles Brown, the Eagles and Bon Jovi, depending on which version you prefer. We went with the Eagles) doesn't have his love anymore, but he doesn't have friends either.

“Do They Know It’s Christmas?” by Band Aid

Bob Geldof and Midge Ure wrote this song after watching BBC news reports on the 1983-1985 famine in Ethiopia. The lyrics are sad, but there is a hopefulness to them by the end of the song. The song raised money for charity when it was originally released in 1984, and again when it was covered in 2004 and 2014.

“Ringing the Bells for Jim” by Johnny Cash

A Christmas song about a little girl crying because her brother is dying. That's the holiday spirit! On the bright side, Jim ends up surviving, but up until that point, it's a very depressing song.

The most epic Christmas song of all time actually has a very moving (and true!) backstory, told completely through musical instruments. The song tells the story of a cello player from Sarajevo who became very well-known. As an old man, he visited his home during the Bosnian War. Every night, as Sarajevo was being bombed and his family and friends were hiding out in bomb shelters, he climbed onto a pile of ruins from his beloved city and played classical music on his cello for both sides of the battle to hear. "Christmas/Sarajevo 12/24" has three parts to it: the rock band and the orchestra represent the two sides of the war and the cello represents the old man.

It's easy to forget that this banger is actually very sad because it always brings the house down (and did so every year on the Late Show Christmas episode), whether you're listening to Darlene Love, Mariah Carey or the duet between Cher and Rosie O'Donnell (don't knock it 'til you try it). It's another wistful you-were-here-last-year-and-now-you're-gone story, which is always a recipe for sadness.

“Grandma Got Run Over By A Reindeer” by Elmo & Patsy

You probably thought this song was hilarious as a kid and now think it's annoying, but the storyline is clearly depressing. A grandmother literally gets run over by Santa's reindeer and dies. The image is from the 2000 animated movie version of the song, in which Grandma thankfully recovers.

You might not even realize this is a sad song if you didn't listen to the story because it's hidden under a fun Motown melody. In the same vein as "Blue Christmas" and "Last Christmas," this song reminisces about former holiday celebrations with a significant other who has since moved on.

“The River” by Joni Mitchell

Joni Mitchell intentionally gifted us this depressing holiday song about a woman thoroughly heartbroken, wishing for a river to skate away on. Mitchell even told NPR in 2014. "We needed a sad Christmas song, didn't we? In the 'bah humbug' of it all."

“Someday at Christmas” by the Jackson 5

The original was sung by Stevie Wonder, of course, but the Jackson 5's version brings a childlike innocence to the lyrics. It's about hoping for a better tomorrow, even if it's not in your own lifetime. So while it's definitely hopeful, there's a melancholy edge to it.

“Where Are You Christmas” by Faith Hill

You know that confused feeling you got when you started growing up and Christmas didn't feel quite the same as when you were little? This song captures that feeling perfectly, plus Cindy Lou Who sings it in the Jim Carey version of The Grinch and it will break your (three sizes too small) heart.

What exactly is it about sad anthropomorphic creatures that makes me sob like a baby? This is about a tiny Christmas tree that no one wants and he's crying because he just wants to light up a child's home for Christmas. It's honestly devastating, but it does have a happy ending.

“My Girlfriend (Forgot Me This Christmas)” by The Click Five

This one from the short-lived The Click Five sounds peppy, but the lyrics are not. The poor guy bought his girlfriend everything she wanted, but she forgot about him on Christmas Day and didn't give him the one thing he wanted the most: a kiss.

“I Want to Come Home for Christmas” by Marvin Gaye

Yet another war-torn holiday song, "I Want to Come Home for Christmas" was written by Forest Hairston and Marvin Gaye. Hairston was inspired to write the song for the troops in Vietnam after seeing people tying yellow ribbons around their trees for POWs.

TBH, I don't even think this is a sad song – the few lyrics included are actually uplifting – but something about the melody always makes me feel like I could burst into tears at any moment.

“Fairytale of New York” by The Pogues ft. Kirsty MacColl

A man finds himself in the drunk tank on Christmas Eve and reminisces on his failed relationship that crumbled due to alcoholism and drug addiction. How's that for holly and jolly?

This one's more ambiguous, but the wistful lyrics "just like the ones I used to know" and "I'm dreaming of a white Christmas" imply a sense of nostalgia and longing. Perhaps Christmas is not the same anymore and just not as good as it once was, and the singers knows that, but still hopes for things to go back to the way they were.

“Yule Shoot Your Eye Out” by Fall Out Boy

In true Fall Out Boy fashion, this holiday song is full of angst. It's about a guy who really doesn't want to hear from his ex and wishes some not-so-jolly things upon her, like crying herself to sleep and metaphorically burying herself alive.

“Christmases When You Were Mine” by Taylor Swift

Leave it to T.Swift to bring the tears during the holiday season. As she's thinking about a lover from Christmases past, she wonders if he is thinking about her too. No matter what you think of Taylor, girlfriend knows how to make you feel all the relatable feels.

Christmas isn't Christmas without the people you love most, a sentiment that the narrator of this song knows all too well. He and his love had been fighting and he lost her, but he's hoping that the magic of the holiday will bring her back to him.

The music has a very melancholy vibe and the first bit of the lyrics reflect on growing up and feeling the Christmas magic slip away. And doesn't Groban's voice always sound a little too emotional to be happy?

"Merry Christmas Darling" by The Carpenters

Karen Carpeneter's gorgeous voice crooning about being apart from her love on the holidays will melt even the iciest of hearts, only to violently break them.