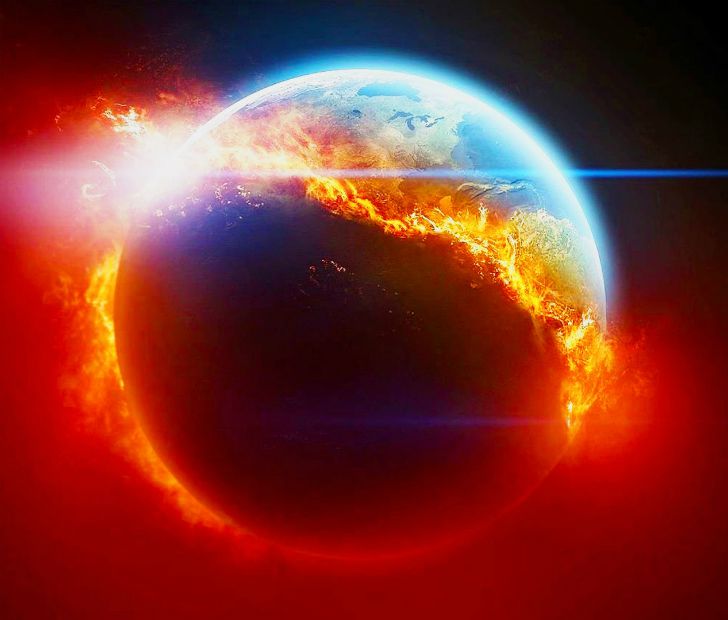 Let's not beat around the bush here: humanity is killing the planet. We're possibly already past the point of no return, and before long, the Earth will be uninhabitable. But there are small, easy steps that you can take to help save the planet. If it isn't already too late.

Yes, activists are trying to save the world with a hashtag. The #2minutesolution is basically a challenge to spend two minutes a week collecting litter and recycling as much as possible. If we all did this, a lot less reusable material would end up in landfill.

[dx_custom_adunit desktop_id="RTK_K67O" mobile_id="RTK_5yk0"] Switching to energy suppliers that use green energy is easier than ever. You may even find that this works out cheaper than traditional fossil-fuel suppliers, but that's of secondary importance. What matters is getting your electricity from a fuel source that isn't poisoning the planet.

Yes, I know, going veggie isn't a popular choice (I've written a lot of meat-loving articles for Obsev, and I love bacon as much as anyone). So if going completely vegetarian is too much of an ask, just try eating one meat-free meal a week. Even reducing your meat intake will help lower carbon emissions.

Do you really need to read a physical newspaper when a digital edition exists? Can you take a photo of a poster instead of picking up a leaflet? Reducing paper waste also means less clutter, which can only ever be a good thing!

[dx_custom_adunit desktop_id="RTK_K67O" mobile_id="RTK_5yk0"] Cleaning water takes a lot of effort, so it's better to lower your liquid use where possible. For example, your plants won't mind if they're kept wet with bath water. Turn off the tap when you're brushing your teeth, and put a brick in your toilet (the cistern, not the bowl!).

Cars produce a lot of pollution, but walking is almost carbon neutral, and is free exercise! If you live in a built-up area, you're probably better off hoofing it.

Okay, so maybe you're trying to travel further than you can walk. Public transport is far better for the environment than driving your own car - especially as an increasing number of buses are now electric. The more people use public transport, the better the services will become.

[dx_custom_adunit desktop_id="RTK_K67O" mobile_id="RTK_5yk0"] As a last resort, if you really can't get to work without hopping in a car, find someone else who's doing the journey and go together. Enduring someone else's inane prattle about their weekend plans is a small price to pay for having one less car in the morning traffic.

Or, if you have the opportunity, don't go into the office at all! Working from home means removing the need for big office spaces, means less commuter pollution, and is far more comfy. Just don't turn the heating up too high.

Whether you're dining in a restaurant or cooking at home, be sure to keep those leftovers, and make sure they're not wasted! Every little helps, and using less food means reducing your impact on the environment.

[dx_custom_adunit desktop_id="RTK_K67O" mobile_id="RTK_5yk0"] Instead of sending all your food waste to landfill, have a compost heap in your garden. This will also be good for enriching your soil, so your garden will be prettier as a result!

If there's something that you eat regularly, consider buying a lot of it all in one go. Bigger packets means less packaging, and it's normally cheaper in the long run, which is a nice bonus.

Shop From the Farmer's Market

Sure, you could buy from big chain grocery stores. Or, you could skip out on a lot of pointless packaging by buying loose fruit and veg from a market stall. You're also not forced to buy six oranges if you know you'll only need two for the week ahead, which reduces waste.

[dx_custom_adunit desktop_id="RTK_K67O" mobile_id="RTK_5yk0"] Of course, the best option is to make your own food by growing vegetables in your garden. This won't reduce your food bill massively, but it'll be one less thing that needs to be driven to your house.

Buying food that's out of season is easier than ever, but this is very bad for the environment. Try to avoid food that's been flown halfway around the world, or grown under canopies and heat lamps.

Bring Your Own Bottle

Ditch single-use plastic bottles in favor of your own reusable water bottle. Request tap water from stores and shopping malls, and consider petitioning your local town officials about getting water fountains installed in public.

Bring Your Own Bag

[dx_custom_adunit desktop_id="RTK_K67O" mobile_id="RTK_5yk0"] Carry your water bottle in a lovely reusable bag, which you can use for groceries instead of nasty single-use plastic. The goal is to reduce the amount that we all rely on cheap, inefficient, wasteful plastic that's immediately thrown away when we're done with it.

Manufacturing an item takes a lot of energy and resources. Rather than buy something brand new, it's better to buy used. This is typically cheaper as well, which is a nice bonus.

Do not use plastic eating implements. Knives, forks, plates, straws - they all get used once, and then spend hundreds of years in landfill. If you have to use cheap and nasty single-use cutlery, go for a pair of bamboo chopsticks, as they will, at least, biodegrade over time.

[dx_custom_adunit desktop_id="RTK_K67O" mobile_id="RTK_5yk0"] Use your local butcher or grocer wherever possible. Typically, the food they stock will have come from nearby, and this means less travel, and as a result, a smaller carbon footprint. When picking a restaurant, ask if their food is locally sourced, as the more people who ask, the more they'll consider it.

Plastic soap bottles are convenient, but unecessary. If you use a bar soap, there's a lot less packaging to worry about - and if your choice of soap is locally sourced, all the better!

Okay, so maybe sometimes plane flights can't be avoided. But can you do a journey on the train instead? If you, consider taking the slower option and savor the scenery, as it'll leave a far smaller carbon footprint.