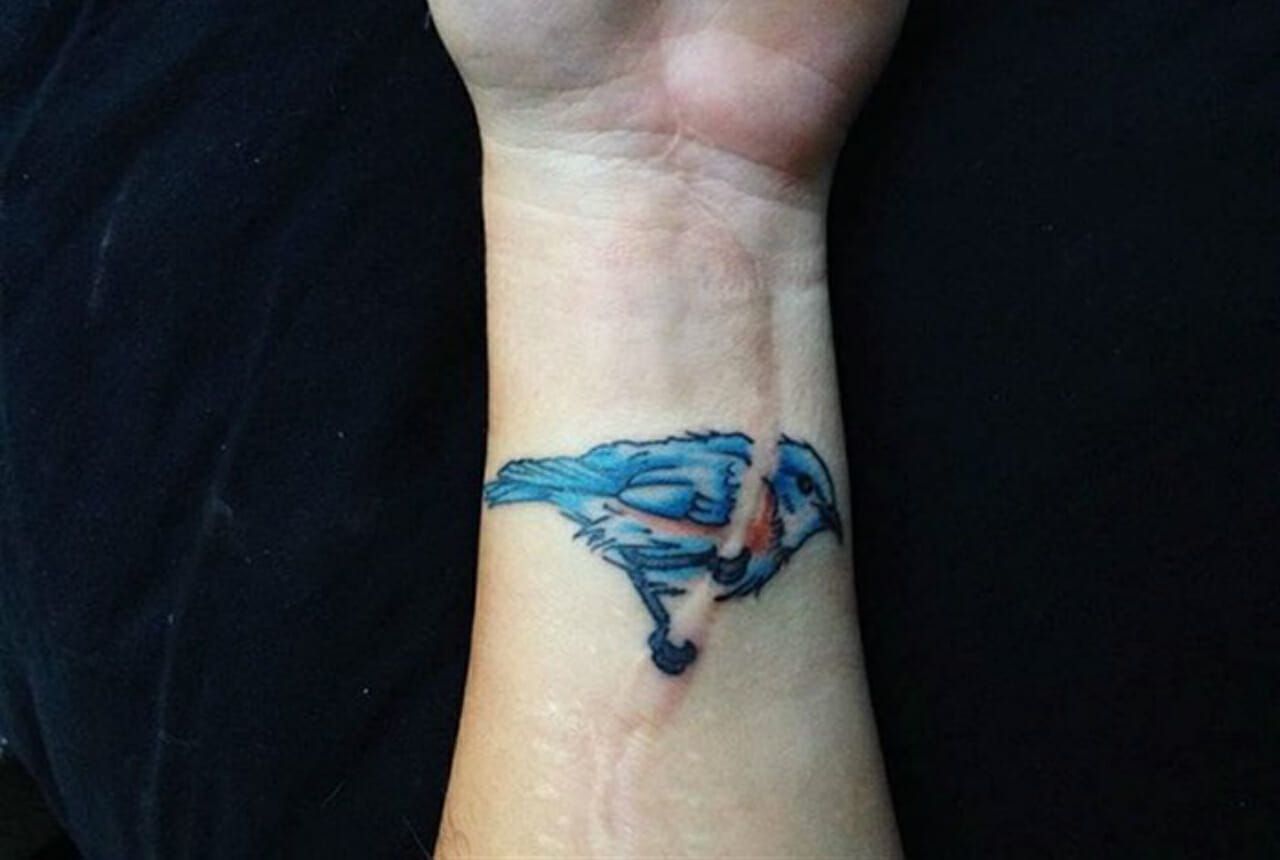 Most people get tattoos because they're trendy and cool. Others do it because they want to make some sort of social or political statement. But there are some that get tattoos over their scars. Sometimes it's to to cover them up, but sometimes it's to highlight and enhance their scars. Just take a look at these folks who got tattoos to deal with their trauma, scars and bad memories and reclaim their power.

Rachel fell from a trampoline at gym practice in high school during her sophomore year. She underwent eight months of surgery to remove scar tissue and dead muscle that "had distorted my forearm." The scars on her arm were "unsightly and ugly." But at 18, Rachel got an eastern bluebird tattoo to turn her scar into something pretty.

A Flower At A Time

[dx_custom_adunit desktop_id="RTK_K67O" mobile_id="RTK_5yk0"] Lindsay felt like her "body didn't belong to me" after her grandpa sexually abused her. She started cutting her ribs, breasts, and thighs. Eventually, she stopped and got a tattoo of a blooming peony on her sternum and ribs, and in the process took "my body back, one flower at a time."

The Meaning Of Strength

Holly had two titanium rods on both sides of her spine and two-thirds of her vertebrate fused into a large bone. She ended up with 2-½-foot scar down the middle of her back. So she got the word "strength" tattooed next to her scar. "The "S" is a tracing of my actually spine from an X-ray before my surgery," which took courage to recover.

Reddit user Jessplays got the watercolor Phoenix by Kurt Jacobsen at Perfection Dermagraphics in Des Plaines, IL to cover the forearm scars from self-harm. The scars were nearly 14 years old and Jess wanted "to cover it with a tattoo for half my life." After years of debating, Jess finally did it and is "so happy!"

The Meaning Of The Feather

[dx_custom_adunit desktop_id="RTK_K67O" mobile_id="RTK_5yk0"] Jennie got a tattoo of this feather because it honored her late cousin who "called me unicorn". It also turned the scar from the broken arm she got from her abusive boyfriend into something beautiful. "Had a metal plate put in it, she said, referring to her arm, and added that "the scar reminded me of how weak I was."

Australian artist Whitney Develle recalls a woman who "was so embarrassed" about her self-harm scars because she felt like a "public museum for people to ridicule." So, like most people who use tattoos to cover up scars, she turned a negative reminder into something that brought positive attention.

At 15, Emily was diagnosed with scoliosis, which curved her spine by 65 degrees. "The surgery was invasive and dangerous," she claimed. She was paralyzed from the left side at 16 because of complications. At 23, she learned to walk. But at 20, she got this tattoo "as a symbol of my recover and strength."

[dx_custom_adunit desktop_id="RTK_K67O" mobile_id="RTK_5yk0"] Shanti Cameron self-mutilated because she was picked on for being taller than her classmates. As a teen, "I was neck deep in depression" and self-harming. After dealing with her inner struggles, she decided on a lotus with azalea blossoms in the mane "representing strength" and to symbolize her "overcoming struggle."

Some folks get tattoos to cover up awful scars like Michelle, who was left with a nasty reminding of her struggles. "I had a bone tumor in my knee removed when I was 10." She picked a pretty ribbon with a bow at the end, which makes it seem like the tattoo is "lacing me up," and it draws attention to her leg but in a positive way.

Feather Is The New Black

After years of self-harm, Lauren lost a friend who "died from an intentional overdose." To honor her friend, she got a black feather tattoo which goes with "another tattoo of blackbirds" she got. It was inspired on the Beatles song that goes, "take these broken wings and learn to fly." Lauren has in a way, and has not self-harmed in 3 years.

[dx_custom_adunit desktop_id="RTK_K67O" mobile_id="RTK_5yk0"] Facebook user Pamela Pratap caught a disease from a cat scratch and "had to have the wound removed," which for the record "almost killed me." It didn't actually end her life, but it left her with a scar. So she used humor when she picked her tattoo, and we have to say that it's a bombass choice.

Alexis had self-mutilated in the past. But "my little brother is 8 and everyone knows I am his biggest role model." So when he asked her "what happened?" She was afraid that he would follow her example. So she made up a story and then went to a tattoo parlor to cover it up with something a bit more artistic and now she's feeling better, more than ever.

Alison self-harmed because she was "suffering from severe anxiety and depression." But eventually she chose a "willow tree tattoo over my scars." The willow tree has a reputation of thriving in some of the worst conditions, so for Alison, it didn't just show strength. It also became a "symbol of adaptability."

[dx_custom_adunit desktop_id="RTK_K67O" mobile_id="RTK_5yk0"] Tatiana Avilan was suicidal on September 2015. She was "sitting on my front porch just burning myself with a cigarette over and over." The mental hospital didn't work, but as soon as "the scars healed," she got a "traditional rose to cover up my burns". She loves her tattoo because "it represents growth."

Tumblr's Blueeyedrider was left with a "very gruesome scar" after her appendix burst and leaked "toxins into my body for months." It nearly killed her, and the surgery left a scar she wanted to forget. But she had to "wait 3 years after the incident" before she got a tattoo of a gecko to cover up what had happened to her.

Instagram's @kelsrod86, Kelsey Rodriguez, had a mass removed from her right ovary on August 22, 2013. But she didn't get this teal ribbon, "a symbol for ovarian cancer," to mask the scar. She wanted to highlight it so it would be a "reminder for me to never forget how lucky I am."

[dx_custom_adunit desktop_id="RTK_K67O" mobile_id="RTK_5yk0"] When Alex was bitten in the arm by a dog, it left him with a reminder that not all pooches are man's best friend. But after years of looking at his scar, he decided to go all new-age and get this tattoo of an ethereal woman, so that he'd have something pretty to gawk at instead of a scar mark.

Buzzfeed user KMPFL45 fell off a motorcycle when she was 10, which "shattered my femur." They held it in place with an eternal fixator until it healed. "It left four scars on my leg." She then chose to cover the scars on the "top of my leg near my hip" with a heart. She did the same with the scars by her knees too.

Buzzfeed user Izzyr42a4562f3 got a "tattoo of the Leo constellation," which is her zodiac sign, around her self-harm areas on her thighs. She views her body "as the universe and my scars as the stars," and notes that the tattoo was a way of reclaiming her body after years of struggling to figure out a way to love it.

[dx_custom_adunit desktop_id="RTK_K67O" mobile_id="RTK_5yk0"] Tasha Le had a habit of cutting this heart into her hand when she was younger. But instead of covering it up, she decided to do something different. She wanted to honor it and had an artist use white ink to trace it. "It's a reminder to love myself," she claims. Now that's a beautiful twist.

When user Ellieh45a51ab64 was just 9 years old, she "had a bone marrow transplant." The scar always bothered her as a kid but it mostly faded. When she was 14, she lost her grandfather, and got an anchor tattoo in honor of him and to remember to "stay down to earth and grounded" always.

Instagram user Leeannemarie97 wore her self-harm scars "with pride" and embraced them. Then she decided to cover it up with this tattoo of a tree with butterflies and flowers which "marks a new beginning and a second chance." It also ensured that she would look forward rather than look back at what led her to cut herself.

[dx_custom_adunit desktop_id="RTK_K67O" mobile_id="RTK_5yk0"] Buzzfeed user Barlow3825 considered getting a "full sleeve tattoo" to cover all of his self-harm scars, but then chose "not to hide my story." So he picked this tattoo of a plant growing from the ground because stuff happened, "but I grew from it," which is exactly what he tells people when they asked him about it.

User Heysamm "struggled with self-harm for 6 years." But nearly two years after she stopped hurting herself, she got this tattoo of a rose to cover up what she did before and to remember that "your past doesn't define you." But it also shows that even from pain something beautiful, like beauty can come out.

What's Under The Sleeve?

Aylar3 did something she wishes she could take back. "I lost a bet in high school" which led someone to use the metal end of a Bic lighter to burn her on her arm. As you might come to expect, it left a scar, but this half sleeve covered things up real nicely, don't you think?

[dx_custom_adunit desktop_id="RTK_K67O" mobile_id="RTK_5yk0"] Megwinn dealt with a lot of "death, depression, and things" since she was 11, which led her to self-harm. Now at 27, she felt like she could "close that chapter on my life." So she picked a tattoo heart and the word Itsumo, which means forever, because family and heart "got me through the days."

User EMT08297 covered her self-harm scars with a tattoo that not only reminded her of creator and visionary Monty Oum, but also to remember "to keep moving in a positive direction." And while she plans to get other tattoos to cover her other scars, this one has a "special place in my heart and always will."

A Time For Everything

User Elhuther90 self-harmed while struggling with "my lupus diagnosis in 2006," and dealing with an eating disorder at 16. But to cover up the evidence of what he'd done, he picked the phrase "A time to Mourn, A time to Dance" with a semicolon and an artistic pattern and you can't even tell there was a scar.

[dx_custom_adunit desktop_id="RTK_K67O" mobile_id="RTK_5yk0"] At the age of 16, Buzzfeed user Brittany Healy was injured and was left with "a big ugly scar" as a reminder. So when she decided to get a tattoo, she picked an anchor with a rose. But it didn't just cover up her scar. The anchor also honored her "late grandfather who served in the Coast Guard."