Scientists Find Perfectly Intact 18,000-Year-Old Dog in Permafrost, But Experts Think it May Be a Wolf

Sophie Dunne
Scientists Find Perfectly Intact 18,000-Year-Old Dog in Permafrost, But Experts Think it May Be a Wolf December 18, 2019Leave a comment 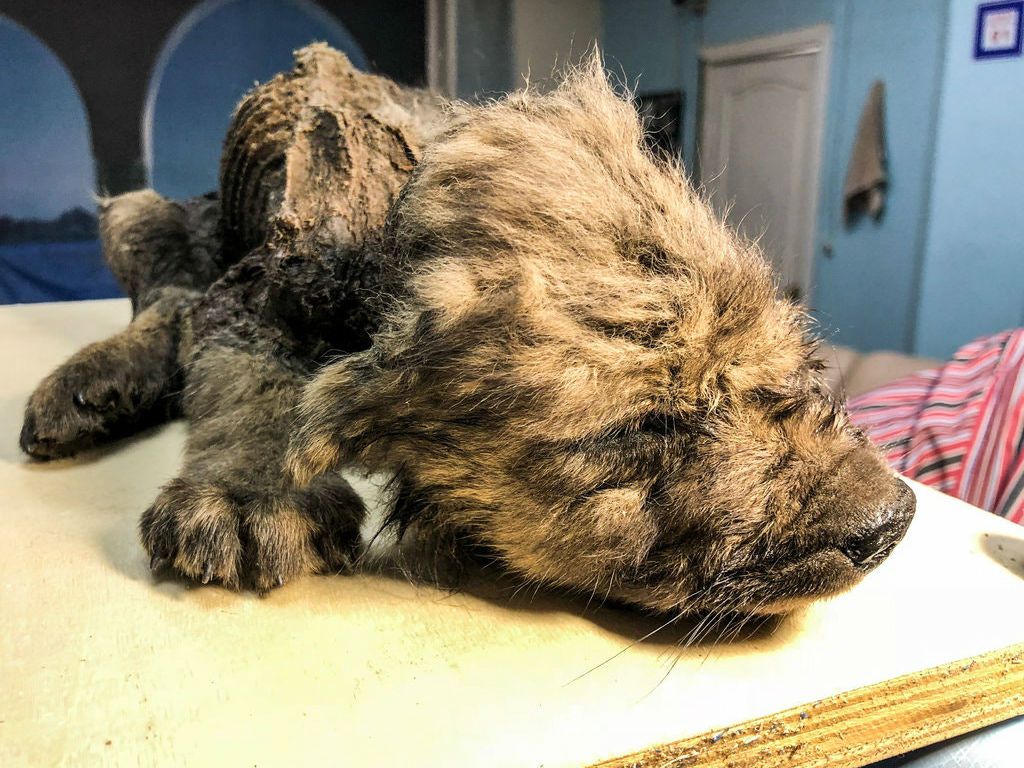 Scientists in Russia were shocked last year after the discovery a furry little puppy that was buried beneath frozen mud for a whopping 18,000 years, bringing us face to face with prehistoric animal life. But what can his death tell us about the dogs we have as pets today?

The puppy which was discovered by locals in the Russian region of Yakutia, is being studied by a group of scientists at North-Eastern Federal University in Yakutsk, the capital of Yakutia.

The impressively preserved pup was found in the summer of 2018 inside a lump of a frozen, muddy ground near Indigirka River, North-East of Yakutsk, its full body intact with a shapely snout, and even whiskers and eyelashes protected by permafrost.

Freezing Conditions Made for Perfect Preservations

Yakutsk, where the puppy was found, is known for its extreme freezing temperatures during the winter months. In fact, last year a photo of a woman in this city with frozen eyelashes went viral, showing us just how cold it is in this part of the world.

Experts Were Unsure Just How Old the Dog Really Was

Following the discovery of the puppy, scientists explained how the conditions of the permafrost could mean that the animal may have died 100-200 years ago. However, this was before researchers in Stockholm conducted radio carbon dating to discover the true age of the animal and when they did they were astonished by the impressive age of this furry little creature.

Scientists Around the World Were Eager to Get Involved

A global effort to learn more about this prehistoric animal was quickly carried out when a piece of the puppy’s bone was sent straight to Stockholm’s Centre for Palaeogenetics where scientists conducted carbon dating tests.

Finding the Correct Age of the Dog

When scientists were alerted of the discovery of this little puppy, the most important thing to do was figure out just how old it was. "The first step was of course to send the sample to radio carbon dating to see how old it was and when we got the results back it turned out that it was roughly 18,000 years old," said Love Dalén, professor of evolutionary genetics in Stockholm.

A Name Fit for a Dog

Scientists at the Center for Palaeogentics asked their Russian colleagues to help come up with the most fitting name for their new furry friend; and the result... "Dogor." And no, this isn't a pun on the word dog, but instead a Yakutian word for "friend."

Frozen for 18 millennia, this tiny fur ball was found with its whiskers and teeth still intact. Looking at this image, the dog looks as if it died the same day the picture was taken and not at all like it died 18,000 years ago.

As Good as New

After an extensive physical examination, scientists found the dog with all its limbs, pelage, teeth and nose almost in the condition as they were the day the puppy died. Scientists were also able to determine that the dog was male.

But Was It Actually a Dog?

Love Dalén, a professor at the Stockholm-based Center for Palaeogentics, took a sample of the puppy's DNA from its bones to find out whether or not the animal was actually a dog or that of a wolf. "That makes it even more interesting," Dalén said.

Could this Puppy Be a Wolf?

With fur, skeleton, teeth, a head, lashes, a nose and whiskers still intact, scientists were now conducting extensive tests to figure out if Dogor was a domesticated pet or a wild animal, and for these scientists, the search for the answer was all part of the fun.

A Series of DNA Tests Were Needed for This Special Case

In an interview with the Associated Press, Dalén said, "We have now generated a nearly complete genome sequence from it, and normally when you have a two-fold coverage genome, which is what we have, you should be able to relatively easily say whether it's a dog or a wolf, but we still can't say."

DNA Tests Were Not Successful

In an interview, Dalén admitted that usually the first DNA tests make it clear whether or not the animal is a wolf or a dog, yet in this case they couldn’t identify it from the first try. "This is intriguing, what if it’s a dog? We can’t wait to get results from further tests", said Sergey Fedorov from the Institute of Applied Ecology of the North.

Further Tests Will Provide the Answer

Scientists have planned to conduct a third round of genome sequencing, which might solve the mystery as to whether or not this animal was a dog or a wolf. The importance of these findings give us insight into the history of dogs and will provide us with a better understanding as to when dogs started to evolve from wolves.

The Link Between Dogs and Wolves

Scientists have conflicting theories regarding the origins of dogs, so any evidence that expands this understanding is essential. Some suggest that dogs evolved about 15,000 years ago from a group of extinct wolves. Others say it could have happened 30,000 years ago from wolves that evolved after generations of domesticated exposure to humans.

Although the findings of its species have not been determined yet, this opens the question of not only if this animal was a wolf or a dog, but more interestingly, if it was the transitional species between wolf and dog. That is the question researchers are now working on.

The Effects of Climate Change on These Prehistoric Discoveries

With the permafrost in Russia's Far East melting as a result of climate change, scientists are discovering more and more prehistoric animals that have been buried beneath freezing conditions.

In recent years, prehistoric mammals such as wholly mammoths, canines, a wholly rhinoceros and a horse's foal have been discovered beautifully intact as a result of the freezing temperatures which the bodies were buried beneath. These findings broaden our knowledge of life on earth thousands of years ago.

An Outpour of Frozen Prehistoric Animals

Climate change and global warming is causing frozen regions around the world to melt at a rapid rate, so we are seeing more and more perfectly preserved prehistoric animals being discovered lying beneath the earth's frozen surface.

In October, the Russian navy reported that glacial melting had revealed five new islands in the Arctic that were completely unknown. Also in January, researchers from the University of Colorado Boulder said that melting glaciers helped them discover landscapes in the Canadian Arctic that had been hidden for more than 40,000 years.

More Discoveries Due to Global Warming in Russia

Over the past decade, Yakutia in Russia has seen a flood of unique discoveries like these as a result of rapid climate change. Sergei Fyodorov, a scientist at North Eastern Federal University, told The Associated Press, "It really exists, we feel it, and local people feel it strongly. Winter comes later. Spring comes earlier."

Ivory Hunters are Among Those Finding the Frozen Animals

Often it is mammoth tusk hunters who discover the prehistoric frozen mammals. According to Dr. Stanton, a research fellow at the Center for Palaeogenetics in Stockholm, treasure seekers sometimes use water cannons to break through the permafrost to extract mammoth ivory tusks, which are later sold.

Dogor Remains Out of the Public Eye

Dogor’s remains are now kept at a private facility at the Northern World Museum where scientific studies continue to determine the history of this little prehistoric puppy.

As of now, the cause of the Dogor's death has not been determined. However, its position did not suggest that he died in distress. Researchers are still carrying studies to learn more about the pup's life and death.

Scientists Are Constantly Learning About Who He Was

Although the cause of Dogor's death is still unknown, researchers do know that he was just eight weeks old when he perished. It is unquestionable that scientists will continue their testing to learn all they can about this captivating creature.