This Secret Room Discovered by Homeowners Held a Historical Secret 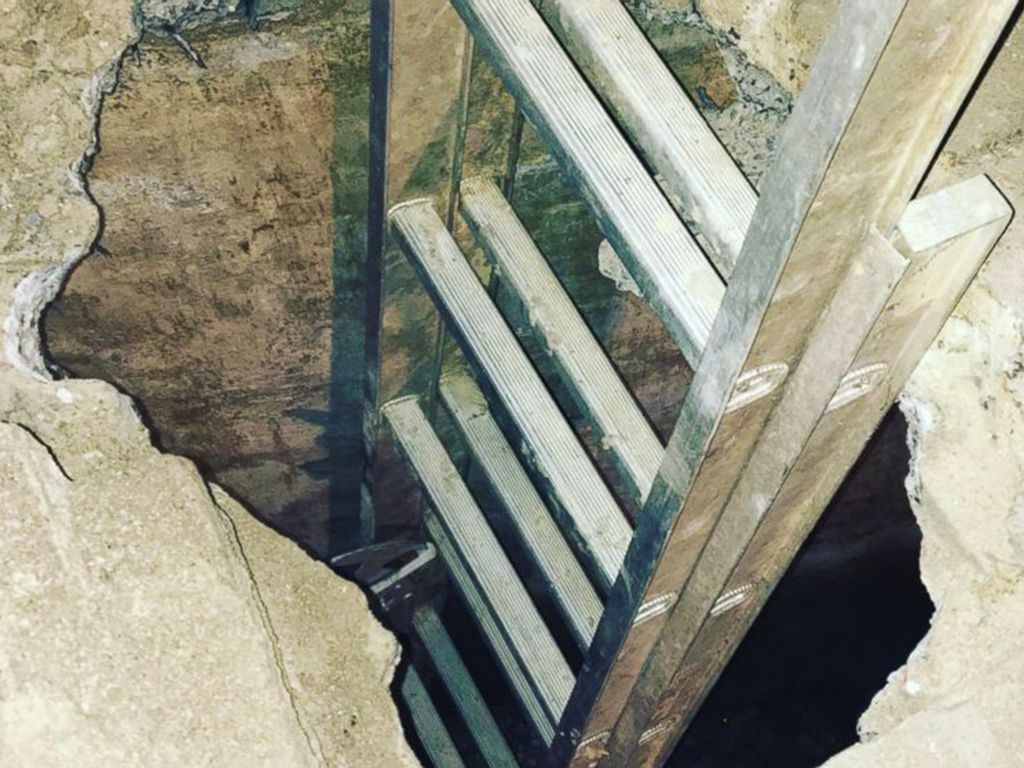 Think you know what’s buried underneath your house? Well, Alexandra Poulos didn’t. She lived in her home in Lansdowne, Pennsylvania, most of her life, but she never had a clue that there was a huge secret right under her feet.

But when some contractors she hired started digging beneath her property, they made a historical discovery. And they weren’t the only ones who did. Homes with secrets like this one's have been found all over the country...

She Always Knew Her Home Had Hidden Rooms

Alexandra Poulos was tethered to her family home ever since she moved in with her parents back in 1974. And she suspected there was a lot of history here because it was so close to Philadelphia. In fact, she told reporters in June 2018: “When I was a child, I would have random dreams about there being other rooms in the house. I’d look it up on dream meanings sites and people always thought I just had a crazy imagination.” It turns out, she wasn’t imagining things.

A Neighbor Knew the Truth About the House

At the time of her interview, she was 43 years old and the owner of the property. She told reporters how her aging father signed the house over to her so she could rent it out to a tenant and manage the property. It was during that time that she recalled a neighbor telling her dad that there was another room underneath the basement, but she had bigger problems to worry about.

The House Had a Serious Problem

The tenant called and told Poulos that the house’s oil tank and walls in the basement had been damaged. So, she immediately hired workers to come fix the damage. But later that night, she started thinking about what the neighbor had told her dad and started digging around on the internet for some answers, and she found some.

She Hired Someone to Dig Deeper

Poulos called one of the masons at Baldwin Masonry, who she had hired to fix the basement walls, and asked if he could dig deeper. Then she explained how she read online that another house in the area had a secret underground room and was convinced her home had one too.

They Found Something Underneath the Basement

Intrigued by her request, the mason stopped by the next day and did as she asked. A few hours later, Poulos’ tenant called her and said, “You’re not going to believe this. They found it.” To which Poulos exclaimed, “You’re joking!” But it turns out that he wasn’t. As luck would have it, there was a secret room fourteen feet underneath the basement that was used to hide people before the Civil War.

It Was a Passage to Freedom

The room was designed to hide those people who had fled from their owners. They would often stop in this region before making their way to Canada. In that moment, Poulos realized that the secret room underneath her home was part of the “Underground Railroad,” so she reached out to the local historical society and learned that Lansdowne was home to well-known abolitionists.

The room had been closed off from the rest of the house and basement to protect those who harbored the people making their way North towards freedom. But in doing so, these brave homeowners risked facing legal consequences. And yet they felt it was necessary to help others. They would even provide food and water to these wayward travelers. But Poulos’ home wasn’t the only safehouse around...

It was a treacherous journey going from the South to the North, and those who took the risk depended on the generosity of others to help them out. And they only moved at night from one location to the next to avoid being discovered. But Poulos’ house isn’t the only one with a secret room. There are houses throughout the states that are still around that hold these hidden rooms. But why did it take so long to discover these safe houses?

Homes Were Outfitted with Secret Entrances

Back in the day, catchers would force their way into suspected safe houses to look for people on the run, so it was vital to make these rooms as difficult to find as possible. It’s why a lot of these homes were retrofitted with attics with partitions, outside-access-only entry points, and whatnot to ensure that the homeowner and the people they were sheltering would remain safe.

Many of these homeowners weren’t rich, so the “bunkers” they provided were cold, dark and less than comfortable for the runaways who sought refuge there. But given that those looking for safety had been treated horribly in the past, these secret rooms were like the Hilton. And Poulos’ home was part of an even bigger network.

Another Home Harbored a Similar Secret

To the east of Poulos’ home, in the town of Harrisburg, was a home in the process of being demolished when a construction crew discovered a hidden room and a tunnel. It had been under the homeowner’s property the whole time and simply forgotten over the decades.

They Called the Historical Society for Help

According to the construction crew, “After we dug that out, we were just standing around talking, and the whole side fell down. That’s when we noticed the hole.” So, the crew called the Middletown Area Historical Society to learn more about what was behind the wall and who used the room by knocking the wall down. But again, this wasn’t an isolated discovery.

150-Year-Old Artifacts Were Discovered at an Inn

While renovating the Continental Inn owned by Frank and Patty Lyons, contractors stumbled upon a safe house once used by the Underground Railroad. Curious, Lyons used a ladder to climb 10 feet down and discovered artifacts that were at least 150 years old. Since then, he’s been removing them one by one and in the process, embracing the past.

The Inn Was a Part of the Underground Railroad

Everyone always assumed that the Continental Inn was linked to the Underground Railroad, but they needed solid proof, which Lyons has been looking for ever since discovering the secret safe house. But there’s a lot of rock and debris in the room that he needs to sift through before he finds the one thing he needs to prove that the Inn was in fact used as a shelter.

Tunnels Link the Inn to Other Safe Houses

Lyons believes he’ll eventually find Caribbean seashell amulets, which people on the run used to keep evil spirits at bay while traveling the Underground Railroad. But the town of Yardley where the inn is located has tunnels that link it to other safe houses like a house on Main Street, one at Lakeside Mansion, another at a mill, and one that runs towards the Delaware Canal. So, there are lots of houses in towns near or around Philadelphia that were essentially safe houses, and the stories behind them are unbelievable, which is exactly what people like Lyons and Poulos learned.

Poulos discovered that her town of Lansdowne was founded in 1789, but nearly a decade earlier, in 1780, Pennsylvania passed the Gradual Abolition of Slavery Act. This meant that her state had adopted abolition early on, but unfortunately, Pennsylvania was still 50/50 on the issue. So, anyone who lent runaway slaves a hand had to keep them hidden, which is exactly what the former owners of Poulos’ home did. But why did people call it the Underground Railroad?

The Underground Railroad Wasn’t a Railroad at All

Despite being called an underground railroad, there was no railroad. It was more like a network of people who allowed former slaves to hide in the underground rooms of their homes, like the one under Poulos’ basement. By 1850, the railroad ran from the Deep South all the way to Canada thanks in part to a former slave named William Still, who established his “headquarters” 6 miles from Poulos' home, and was dubbed the “Father of the Underground Railroad.”

Men like Still and Thomas Garrett made a huge difference by risking their lives to ensure the well-being of runaway slaves. Still himself ran the safe house network that went from Philadelphia all the way to Ontario, Canada. And one of his most valuable contacts was Garrett, who was questioned many times over about his role in helping slaves escape. It’s not that he was breaking any laws, but the stigma around the issue at the time didn’t make him very popular.

Although Northern people disliked the thought of slavery, many of them didn’t want to co-exist with Africans and African Americans, so life was tough for people even in Delaware County in Pennsylvania. Many had their voting rights taken away from them and their movements were monitored by town officials. And if that wasn’t bad enough, they were often assaulted or ran into race riots, which is why the Underground Railroad continued helping these people move further North, which upset Southerners.

Southerners weren’t happy that the North had been helping their slaves escape, which led to the second Fugitive Slave Law being passed that made running the Underground Railroad more dangerous, and yet, Still and Garrett’s mission did not waiver. But the difference of opinion between the free and slave states was destined to ultimately trigger the Civil War in 1861. And the movement was already having problems 11 years before that happened.

The Slaves Had to Keep Moving

Safe houses like the ones under Poulos' home were only 15 feet down, 9 feet wide and 9 and a half feet long, so they couldn’t accommodate a lot of people long-term. It’s why so many runaways kept on moving, and it’s a good thing that they did for both themselves and those who helped them. The Fugitive Slave Act of 1850 stated that anyone helping slaves escape would get fined $1,000 and face up to six months behind bars. It’s why the former slaves opted for Canada, whose laws towards blacks were far more merciful. Unfortunately, some allies paid the price along the way.

In 1848, a complaint was issued against Garrett for helping a family of former slaves escape the state of Maryland. And while facing a jury of his peers, he gave a touching speech to appeal to everyone’s humanity. One juror even begged for mercy, but the judge ordered that every dollar Garrett owned go to the master who had lost his slaves, essentially leaving Garrett penniless. But he swore he wouldn’t give up, which put him in serious danger.

Many of his enemies in the South put a $10,000 bounty to catch Garrett helping slaves escape. But despite a close call with a group of bounty hunters whom he invited to dinner to change their minds, Garrett was able to continue to fight the good fight until the Constitution guaranteed the rights of black people. But no one might have even remembered what Garrett did if it hadn’t been for his friend, Still.

Still Was an Incredible Records Keeper

The reason we all know about what heroic pioneers like Garrett did for the Underground Railroad is thanks to Still, who kept impeccable records of the events. In fact, after the Civil War ended, he wrote “The Underground Railroad” which provided a lot of the information we know about this incredible movement. And the room in Poulos' house offers even more insight into this pivotal moment in American history.

The safe house in Poulos' home is a tribute to what happened before, during, and after the Civil War. And now that it has been discovered, we’re learning more about why the Underground Railroad was so important to ensure the safety of those who were looking to find freedom from slavery and persecution.