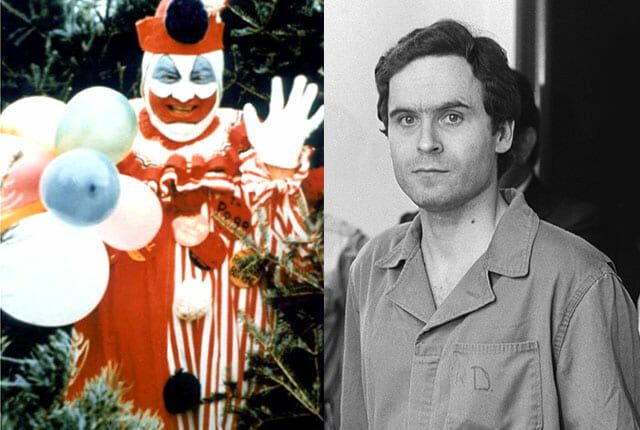 Hollywood makes serial killers seem entertaining and extremely smart in movies like "Hannibal" or TV shows like "Dexter," unlike their chillingly creepy real-life counterparts. As if torturing, murdering (and sometimes eating) their victims wasn't terrifying enough, it should come as no surprise that there are other creepy facts about most serial killers. Here are some of the worst of the bunch.

H.H. Holmes was America's first serial killer, but he was also sort of a poet. If you can call him that. In one of his interviews, he said he couldn't help being “a murderer, no more than the poet can help the inspiration to sing."

H.H. Holmes may have murdered anywhere from 20 to 200 people between 1891 and 1894 in Chicago, Illinois; Irvington, Indiana; and Toronto, Canada. But he was also a different type of lady killer. He was married to three women – Clara, Myrta, and Georgiana – all at the same time.

Between 1977 and 1978, Richard Chase, aka The Vampire Killer, shot and killed six people. He also believed that if he placed oranges on his head to absorb vitamin C and injected himself with rabbit and human blood he would counteract the effects of his unbeating heart.

In addition to believing that he could absorb vitamin C through his head, Richard Chase only broke into houses that were unlocked. He took that as a "hint" that he was welcome inside, and he skipped the houses that were locked.

Edmund Kemper abducted and killed as many as 10 women between 1964 and 1973, including his grandparents from his father's side, and his mother. But he confessed his crime and waited for authorities to arrest him at a telephone booth. According to research, it is very rare for a serial killer to turn himself in, which makes Ed stand out from everyone else.

Jeffrey Dahmer was a bit of an outcast in high school, but also a class clown who engaged in practical jokes and weird antics for attention. Strange though he may have been, his classmates probably didn't expect him to later kill 17 men and eat some of their body parts.

Jeffrey Dahmer's father, Lionel, wrote the book, "A Father's Story" in 1994. In it, he talked about how he learned along with everyone else on July 23, 1991 that his son was a serial killer. Lionel struggles to find a reason why his son turned out that way, despite having had a happy childhood.

Between 1989 and 1990, Aileen Wuornos murdered seven men in Florida. But besides having aggressive tendencies, she also had an artistic side. She was quite a prolific artist, and was able to create beautifully intricate drawings using a ballpoint pen.

Son Of Sam And The Law

David Berkowitz brought NYC to its knees in 1977 by killing people as ordered, according to him, by a talking dog. Rumors that he intended to parley his killing into a book deal led to the Son of Sam Law, to prevent criminals from profiting from their crimes. It was deemed unconstitutional.

Richard Ramirez butchered 14 people between 1984 and 1985. Some claim he suffered from hybristophilia, a condition that causes a person to be aroused by partners who know of his killing. That probably explains how he found someone like Doreen Lioy, whom he married despite being on death row.

Ottis Toole's grandmother was considered a Satanist, and may have influenced him into becoming a serial killer. Not only did he learn from her how to dig up graves for rituals, but he also confessed to several murders.

Joe Ball didn't just feed stray animals to a bunch of crocodiles in his personal resort. He also killed anywhere from two to 20 women between 1936 and 1938. Rumor has it he fed some of his mistresses to his gators. But he killed himself before he could answer for his alleged crimes.

John Bodkin Adams wasn't just convicted of fraud, but of killing 200 patients and changing their wills between 1946 and 1956, so he would end up inheriting their fortunes. But what do you expect from a doctor who always made sure he had cake (yes, cake) in the operating room?

Petiot was examined by mental specialists over the years and deemed clinically nuts, but that didn’t stop him from becoming the mayor of Villeneuve Sur Yonne in France. He was removed from office twice and was eventually convicted of killing 27 of 63 people he confessed to murdering.

Ng, who once created a false identity to join the U.S. Marine Corps only to steal a cache of automatic weapons and then desert, later raped, tortured and/or killed anywhere from 11 to 25 people between 1984 and 1985 at Leonard Lake in Calaveras County, CA.

Bianchi applied at none other than the the LAPD, perhaps to help himself cover up the crimes that he and his serial killer buddy, Angel Buono, committed around 1977 to 1979. Dubbed the Hillside Strangler Duo, they raped and killed as many as 10 women.

This former military man received three U.S. Army service medals and was even a prison guard in Walla Walla, Washington. His hatred for prostitutes led him to kill 13 sex workers between 1996 and 1998 in the Spokane, Washington. He was convicted of all 13 murders.

In 1998, the Colombian serial killer who killed 350 young girls, but was convicted of only 110 murders, ending up in an asylum. But he got out by posting $50 bail. Eventually, a warrant was issued, and he was apprehended in 2002.

Bachelorette Cheryl Bradshaw dodged a bullet when she wound up picking Rodney Alcala on "The Dating Game" In 1978. There was a creepy aura about him that she simply found very resistible, and that was a good thing because Alcala later was accused of murdering 130 people.

The BTK killer murdered 10 people between 1974 and 1991 in the Sedgwick County, Kansas, area. He was nicknamed for his habit of binding and torturing his victims (bind, torture, kill). His other activities included working for the security company ADT for 14 years. Life is full of ironies.

John Wayne Gacy murdered 33 men and teenaged boys in Cook County, Illinois, between 1972 and 1978. But he was also the leader of the local Democratic party, shook hands with First Lady Rosalynn Carter, and worked as a clown at children's parties.

Ted Bundy may have murdered at least 30 people, but one summer in 1970, he jumped into Green Lake in Seattle and saved a 3-year-old toddler from drowning. He also got an award from Seattle police for pursuing a purse snatcher and returning the bag to a woman.