Wedding Traditions From Around The World That Will Shock You

Karla Pavelka
Wedding Traditions From Around The World That Will Shock You November 12, 2019Leave a comment 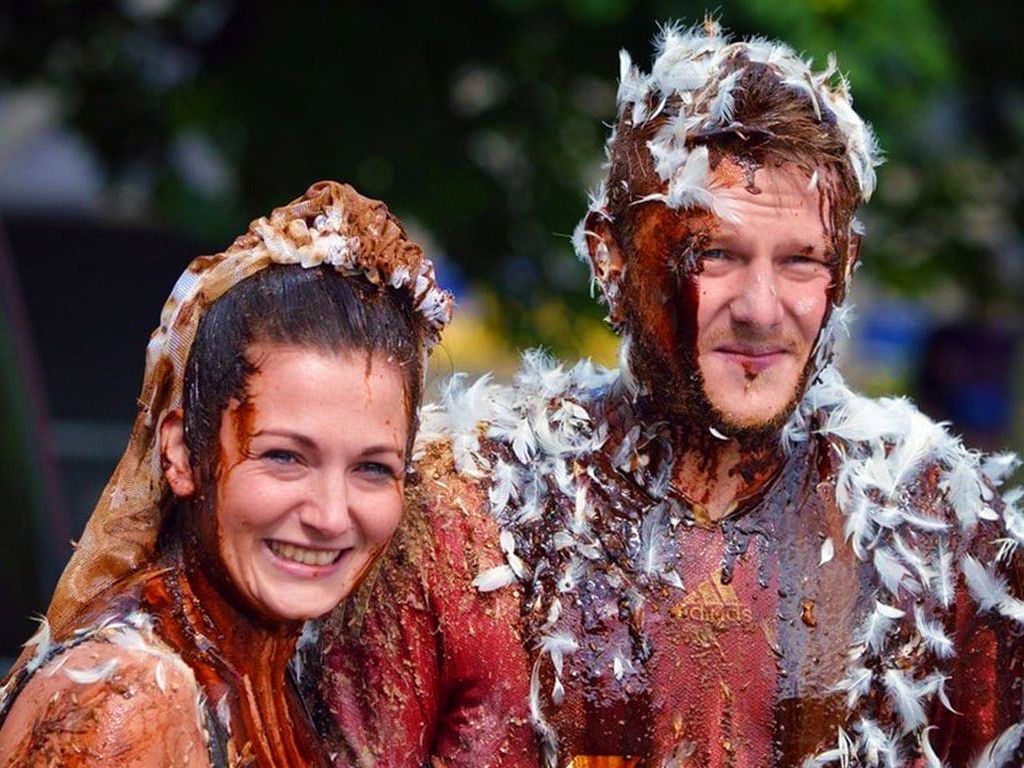 Something borrowed, something blue, something old, some paste, some butterfat. Weddings are a different affair around the world. Some of these strange wedding traditions could take your wedding from beautiful to extreme very quickly.

It sounds much more ominous than it is! At some point during the party, the groomsmen will kidnap the bride. It symbolizes two things. First, it symbolizes the bride's separation from her parents. Second, it symbolizes that the groom, who either has to find her or pay ransom for her, will always care for her.

Nothing says 'love' like getting covered in muck together. A few days prior to the wedding, both the bride and groom are captured by family and friends. They're then covered in treacle, soot, and flour. It's meant to ward off evil spirits.

No relationship is without obstacles. The sawing of the log, which the bride and groom do together, is meant to be the first obstacle the couple overcomes. Talk about a lot of pressure! It's no wonder the couple above chose a log that was already quartered.

Haldi paste is a paste made of turmeric, water or rose water, and sandalwood powder. It not only has a vibrant color, but a strong smell as well. During the ceremony, relatives of the couple apply the paste to five body parts: the face/neck, hands, knees, arms and feet. It has two purposes. First, it's meant to ward off the evil eye. Secondly, the yellow color that comes from the turmeric is thought to be auspicious.

It's not unusual for weddings to bring on tears. For the Tujia people, however, it's expected. A Tujian bride is expected to cry for days before her wedding, and days can mean up to a month. Her mother, grandmother, sisters, and aunts may join her. Not only is there crying, but there are even crying songs to be sang. The crying, and the bride's ability to sing crying songs, are a symbol of wisdom and virtue.

In Mauritania, a woman's physical size is said to be the space she takes up in her husband's heart. So, instead of wedding weight loss, there is wedding weight gain. The practice, however, has dangerous consequences, where girls as young as five are being force-fed in preparation for marriage. Some girls are even tortured into eating.

There's so much focus on the brides, how about the groom? In South Korea, the groom's shoes and socks are removed. His feet are tied together. Then, his feet are beaten. It's meant to be a test of the groom's strength and character.

Drinking During the Ceremony, Japan

This is a tradition known as Joota Chupai, or Joota Chori. Joota is the name of the embroidered footwear grooms wear to the wedding. As the groom makes his way to the Mandap (the ceremonial structure where the wedding takes place), it is customary for him to take off his shoes. His female relatives then steal it, and the groom has to pay to get them back.

This tradition from the American south is all about the weather. The folklore says that burying a bottle of bourbon will prevent it from raining on the wedding day. There's a proper way to do it, however. The bottle must be full, and it should be buried upside down. It should also be done exactly a month before the wedding. Couples dig up the bottle the day of the wedding and enjoy it with their guests.

This Mexican tradition has its roots in Catholicism. The "padrinos de lazos" (lasso godparents) are a married couple who are chosen because they serve as role models for the couple getting married. They place a lasso around the couple as a symbol of unity. The tradition is popular in other countries with a large Catholic population, such as Spain and the Philippines.

Smearing the Bride in Butterfat, Namibia

Like the Czech people, people from the Namibian Himba tribe kidnap their bride. Except they do so to pamper her. They dress her in a leather headdress and expensive jewelry. They put herbs and butterfat on her skin and in her hair. After the ceremony, the groom's family also puts butterfat ointment on her. This signals her acceptance into the family.

Known as "Pu," Hawaiian weddings will have a conch shell blown to herald in the special occasion. The conch is blown by the Kahu, the caretaker of the ceremony. When Hawaii still had a royal family, a conch shell was blown whenever a royal canoe arrived, or whenever a special ceremony started. Now, that includes weddings.

Plunging in a Dagger, Bali

Both the bride and groom carry knives for different parts of a Balinese ceremony. At one point, the groom will plunge his dagger, known as a kris, into a woven mat. Though some sources say this signifies that the bride is ready to settle down, others say it represents her deflowering. Either way, the pandanus mat will never be the same.

Bridesmaids set up what's known as "wedding door games." These games are meant to test the groom's love for his new bride. They can include things like consuming questionable food and drink, or just answering questions about the relationship. The groomsmen can help him. Or, he can bribe the bridesmaids with red envelopes (which contain money). Either way, it's all in good fun!

While animals are often slaughtered for a wedding meal, this happens before the wedding. The bride and groom kill a chicken looking for a lucky sign on the chicken's liver. If they don't see one, they'll keep killing chickens until they do. Once they get the sign, they can set a date for the wedding.

Keeping a Foot on the Ground, Ireland

In many cultures, it's traditional for the bride and groom to dance. For the first dance in Ireland, however, the bride has to keep one foot on the ground at all times. If, at any point, both feet are in the air she's in danger. From what? Being kidnapped by fairies.

Pulling a Ring out of the Cake, Peru

In Peru, the wedding cake is multilayered. One of the layers will having ribbons. All the unmarried women gather around the cake after the ceremony. They each pull a ribbon. One of the ribbons will have a fake wedding ring attached. Much like the bouquet toss tradition, whoever finds it will be the next one to be married.

Stealing Kisses from the Bride and Groom, Sweden

In Sweden, the minute the bride or groom leaves the table, the remaining newlywed becomes fair game for the guests. The guests are free to kiss the newlywed. It used to be that this only applied to the groom, that when the bride left, the women were free to kiss him. In the spirit of gender equality, the reverse is now true as well.

Paying a Ransom for the Bride, Russia

In Russia, the groom shows up to the bride's home, and asks for the bride. She doesn't just come out, though, and the groom must pay a ransom. Someone does come out, dressed as the bride, but it's not actually the bride, just someone dressed up to fool the groom. The family asks for more money. When they're satisfied with the amount, the bride comes out.

Writing a Hitlist on the Bride's Shoes, Armenia

An Armenian bride might write the names of all her bridesmaids on the bottom of her shoe. The bride keeps her shoes. Later, as each bridesmaid gets married, she crosses their names off. That's quite the way to keep track of your single friends!

Some wedding traditions incorporate the parents of the bride and groom. In Ethiopia, it's the grandparents who are included. The couple expresses gratitude to their grandparents by kissing their knees before entering the space where they get married. The grandparents then give the couple their blessing.

Cutting Up The Groom's Tie, Brazil

In Brazil, they'll cut off the groom's tie. Not only that, they'll slice it into pieces. Each of the pieces is auctioned off. The couple is given the money.

Sticking Dough on a Door, Lebanon

In Lebanon, the bride will stick a piece of dough on the door of the newlyweds' house. The dough tells the couple's fortune. If it sticks, they'll have a long, happy marriage together. If not... well, just hope it doesn't happen.