Squirrel Gets Trapped Between Train Tracks, Jogger Stops To Help 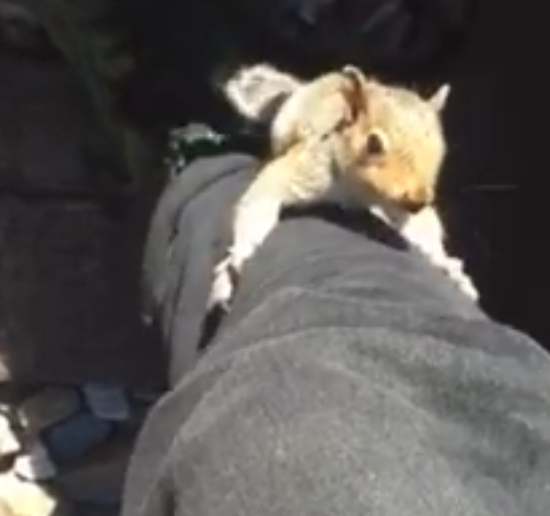 A man named Nick Allen decided to go for a jog during a warm summer afternoon and as he was getting close to ending his jog, he decided to run next to the train tracks. Good thing he made this decision because he found a small fella who was stuck behind the train tracks and desperately needed a little bit of help.

If there is one thing that everyone knows and loves about squirrels, then it has to be their adventurous spirit. These little animals love to explore and unfortunately, this sometimes gets them in serious trouble.

A young man by the name of Nick Allen decided to go for a jog during a hot summer afternoon. Little did he know, his afternoon would end with him saving a life!

Nick wanted to run alone and what better place to do that other than by the train tracks? However, someone who was stuck in between the tracks was waiting for Nick.

As Nick was jogging, he spotted a small animal that was struggling to climb from between the tracks. Without giving it any second thought, Nick decided to stop jogging and to help out.

16. The Squirrel is Stuck

The small animal that Nick was trying to save was a small squirrel. The little fella was probably trying to explore the train tracks and since it's so small, it couldn't get out anymore.

Nick knew that he had to try and help the squirrel get out. Otherwise, the train would come and the squirrel's chances of making it out are quite slim.

The problem here is that Nick didn't know how to pick up the squirrel. The little animal would probably get scared if he tried to grab it in the palm of his hands and he needed to come up with a different solution.

Nick didn't expect this at first, but rescuing the small squirrel was proving to be quite a difficult task. He needed to find a way to pick up the small animal and he needed to do it fast.

12. Not Paying Any Attention

The squirrel was desperately trying to climb out and it didn't even notice that Nick was so close. As you can surely imagine, the squirrel was super scared.

Out of nowhere, the squirrel stops doing anything. It noticed Nick and the interesting thing about this is that the squirrel didn't try to run away from Nick.

As Nick was trying to come up with ways to pick up the squirrel, the small animal started running towards his foot. Something special was going to happen.

The squirrel probably realized that Nick is there to help and it started climbing his leg. Can you believe that?

8. The Mission Is Not Over

Even though the squirrel was the one to "reach out" to Nick, the man's mission was not over yet. He still needed to help the squirrel get out and take it to a safe place.

The man didn't want to scare away or shake the squirrel that was attached to his leg and he made slow and small steps towards safety.

After Nick reached a safe spot, the squirrel didn't just run away. It was looking at Nick as if to say goodbye and thank you for saving its life. Isn't that amazing?

Nick says that he felt like a Disney Princess when the squirrel climbed his leg. He never expected his jog to end this way but he is happy that it did.

Nick is the one in this picture and we want to give him praise for being a great guy. He went out of his way to save a small animal in need of help and this makes him a good guy.

As previously mentioned in the beginning, the adventurous spirit of these adorable animals will get them in trouble! Good thing that Nick was around to help when the squirrel got stuck.

The most amazing thing about squirrels is that they are quite friendly with people. Just look at the one in the picture featured above, isn't it just the most adorable thing ever?

Let's hope that the little squirrel who was the star of our story managed to find its way back home and get reunited with its family.