Harvey Shepherd
Surfer Tries To Catch Some Waves And Instead Makes A New Friend July 16, 2019Leave a comment 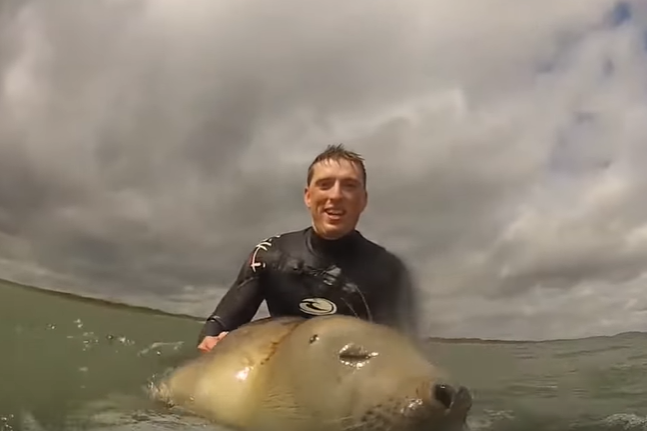 What better way to cool off during a hot summer day other than to grab your surfing gear and to jump into the ocean? This is exactly what two friends from California decided to during a free weekend and to their surprise, they ended up making a new friend who was waiting for them beneath the waves.

If there is something that we all can agree about, then it has to be the fact that surfing is a really fun activity. On the downside of things, surfing can also be quite dangerous at times if you are not careful enough.

The problem with surfing is that the biggest waves can often be found only in shark-infested waters. Even though shark attacks are rare, they do happen and surfers can never forget about that.

Two surfers went out on the waters of Cali and to their surprise, someone was waiting for them beneath the waves. Luckily, it wasn't a shark.

As the two surfers were having the time of their lives, a seal pup approached them. The two surfers couldn't believe their eyes and they didn't know what to do so they just stood still.

Seals are super friendly and as we can see from this picture, the pup was wanted to have some fun and it jumped on the board of one of the surfers. What happened next left them in shock!

Good thing that one of the surfers had a GoPro camera mounted on the board because otherwise, no one would believe what happened. Whoever heard about a surfer seal pup before? Then the pup does this...

What's great about seal pup is not just the fact that they are super adorable, but that they are friendly as well. They never shy away from humans and they love nothing more than to interact with divers and from the looks of it, surfers as well.

At first, the two surfers were worried that the pup's parents might show up and try to attack them. Fortunately, this is not what happened and instead, the seal pup only wanted to surf the waves.

Seeing how the seal pup wanted to have some fun, the surfer started slowly paddling with his arms. He was taking the seal pup on a fun ride and the pup couldn't be anymore happier.

The awesome thing about this story is not only that the seal pup wants to surf, but that he is a great match with the surfer. They got along right from the start!

The surfer's initial plan was to try and catch some waves. He never expected to make a new friend but he was happy that he got to meet the seal pup.

As you can surely imagine why the video of these two surfers having fun with the seal pup went viral. Can you guess how many people have watched the video recorded with the cleverly mounted GoPro camera?

If you guess is close to one million people, then you are correct! However, we can be sure that the video is only going to rake up even more views during the upcoming future since everyone who sees it shares it right away.

After playing around with the surfers for a couple of minutes, the seal pup dips beneath the waves. Two minutes pass and the surfers start wondering if the pup left home and if he is ever going to come back.

To everyone's surprise, the seal pup decides to come back and have some more fun. As we can tell from the big smile on the surfer's face, he loves spending time with his new friend.

If there is something that we can be sure about, then it has to be the fact that this seal is a natural born surfer. Don't you agree?

A couple of hours have passed and the surfer started making his way towards the shore. However, he wanted to say goodbye to his new friend before he left.

The surfer said goodbye and the seal started swimming away. The man is still in shock and he can't believe the unique experience that he got to live.

Even though the seal pup was still hanging around the other surfer, the two men needed to make their way towards the shore. The weather was getting worse and they needed to get out to safety.

Even though the two surfers never expected to meet a seal pup in the middle of the ocean and to befriend it, this is certainly a precious memory that they will never forget.