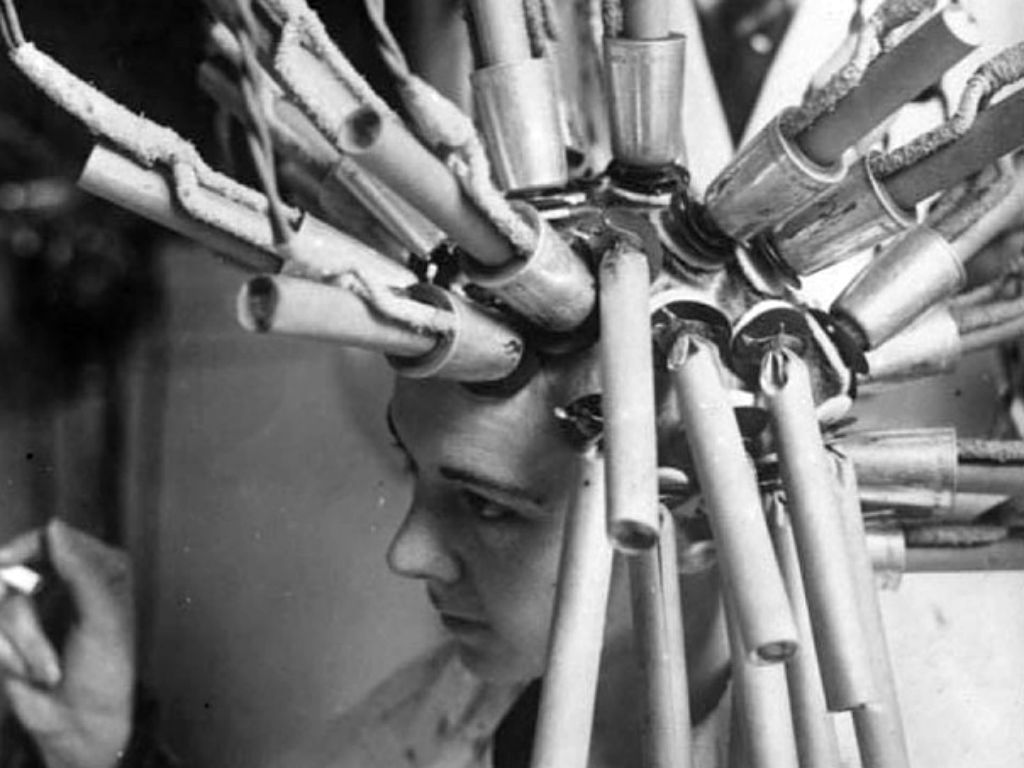 Beauty standards are constantly changing, so it’s difficult to judge beauty practices from the past. But some trends were so unusual, and in some cases shocking, that they'll seriously send shivers down your spine...

In China, when a girl was around 3 or 8 years old, the toes on her feet, minus the big toes, would be broken and laid against the sole, creating a triangular shape. Foot binding started around the tenth century until the early twentieth century. The feet were then held in place with a silk strip. Over time, the wrappings became tighter, leaving young women with dysfunctional feet, which was a symbol of privilege and wealth since only able-bodied women could work the fields.

In Victorian times, people ate a tapeworm cyst. Once it grew to full maturity, the tapeworm would absorb most of the fats and the nutrients that the person ate. But this extreme diet fad led to epilepsy, meningitis, and dementia. Digestive and rectal issues were also common when trying to excise the tapeworm from the body.

Before the revolution, French women used heavy wigs that went up to one and a half times the height of their own faces. They were also decorated with all sorts of feathers, pins, cushions, and accessories to look high class.

In the1930s, people froze their freckles off with carbon dioxide. But they had to use airtight plugs to protect their eyes during this freaky procedure. Their nostrils were filled in, too, so they had to use a tube to breathe.

In Victorian times, corsets were all the rage. So, women started using these waist-restricting devices to create an exaggerated hourglass waist. Unfortunately, the lack of oxygen made fainting pretty common and it also led to other pulmonary illnesses like tuberculosis and pneumonia.

For hundreds of years, Japanese women blackened their teeth to symbolize aristocratic status and beauty. It was also considered a sign of marital commitment. The dark brown solution they used was made out of dissolved iron filings in vinegar. Not only was it trendy, but it prevented tooth decay.

In the 18th century, people stuck beauty marks to their faces and they came in all sorts of shapes and sizes. Some of them looked like moles, but others looked like a horse and carriage as well as hearts, moons, and stars.

In the 19th century, people looking for a glowing complexion consumed arsenic, which is pretty toxic. In most cases, it led to gastrointestinal problems, muscle cramps, stomachaches, convulsions, and hair loss. Aside from a myriad of health complications, arsenic was also potentially fatal.

The Mask of Horror

In the 1940s, people put a bizarre-looking mask on and plugged it in to heat up their face and head. This was believed to stimulate blood flow and make the skin look younger and more refreshed.

In the 19th century, women didn’t always go for long, full, voluminous lashes. They trimmed them and then dabbed castor oil on their lids to get a little extra beauty shine.

In the 16th and 17th centuries, women wanted to look unnaturally white to cover up blemishes and other types of scars. So, they applied powder containing Venetian ceruse, which is a mixture of white lead and vinegar. Then they'd apply red lead on their cheeks to make them look rosy. Eventually, the lead broke down, causing paralysis, brain swelling, and organ failure.

Back in the day, mercury was used to treat syphilis, but apparently, it also got rid of blemishes, too. Unfortunately, mercury absorbed through the skin, causing tremors, depression, fatigue, kidney and liver damage. To make things worse, it was also really toxic.

In the 1300s, English women started plucking their hairlines out to give the appearance of a rounder forehead. At the time this was considered a beauty trend, but the church definitely wasn't on board with this beauty practice. They actually considered it a sin to pluck hair from their heads or their faces.

In the 1940s, folks looking for some fun at the beach or by the pool, wore these Freckle Proof capes to shield themselves from harmful ultraviolet rays. The capes also had built-in sunglasses. Eventually, sunscreen came into the picture and this went the way of the dinosaurs.

Once upon a time, women would use eye drops made from the nectar of the toxic plant nightshade. The drops would cause the pupils to dilate giving the appearance of those innocent "deer caught in a headlight" look. But side effects included the inability to focus on objects up close, blindness, and heart palpitations.

In 1915, an ad for Radior Chin Straps claimed that the radioactive energy from Radium Bromide would cause currents of energy to flow through the skin to get rid of tired and wrinkly looking skin. Thankfully, this freaky beauty trend didn’t catch on.

A Different Kind of Blush

In the 19th century, people got creative by dabbing some carmine dye or red beet juice onto their cheeks. This gave them that innocent flushed look that clashed against the pale skins of the time period in a pleasing way.

To keep one’s lady bits smelling fresh, Lysol offered the very same germ-fighting product we use to clean our homes as a feminine hygiene product. But while their ads claimed it wouldn’t harm delicate tissue, women were still putting Lysol where the sun don't shine, which was every bit as irritating as you can imagine.

In the 1930s, women put on fruit masks to give their skin the vitamins and antioxidants it needed. Plus, it was the ideal way to use fruits that were getting a bit too ripe. But these days, everyone uses mask creams derived from fruits and vegetables.

In the late 17th century, women used hot tongs coated with lard to keep the hair in place after wrapping it in iron and wooden frames. The frames were used to give their hairdo a puffy look. But lard paste wasn't a guy magnet because it stunk really badly and it also attracted rodents and lice.

In the 1940s, brands started manufacturing different shades of lipsticks, but they were all still pretty much similar to the color red. So, once the lipstick was applied, women added Vaseline over their lips to get a little extra shine.

In the 1890s, the Chin Reducer and Beautifier machine was marketed by Professor Eugene Mack to those who wanted to get rid of their unsightly double chin. All you had to do was pull a cord on the contraption. Mack also claimed that his product reduced enlarged glands and also prevented double chins from coming back.

In the late 19th century, some women chose to give their skin the illusion of looking paler and more translucent by tracing their veins with a purple or blue pencil.

In the 1920s, women used these humongous hairdryers to dry their hair at a salon. But the devices looked more like something you’d expect to see being used by an orchestra at a concert hall.

In 1920s Germany, this woman was undergoing a vintage perm to, in all likelihood, make her hair wavier. But it kind of looks like the person in the background is about to extract her thoughts with this frightening device.