Bridget Daly
These Terrifying Texting And Driving Accidents Will Scare You Into Putting Your Phone Down March 28, 2018 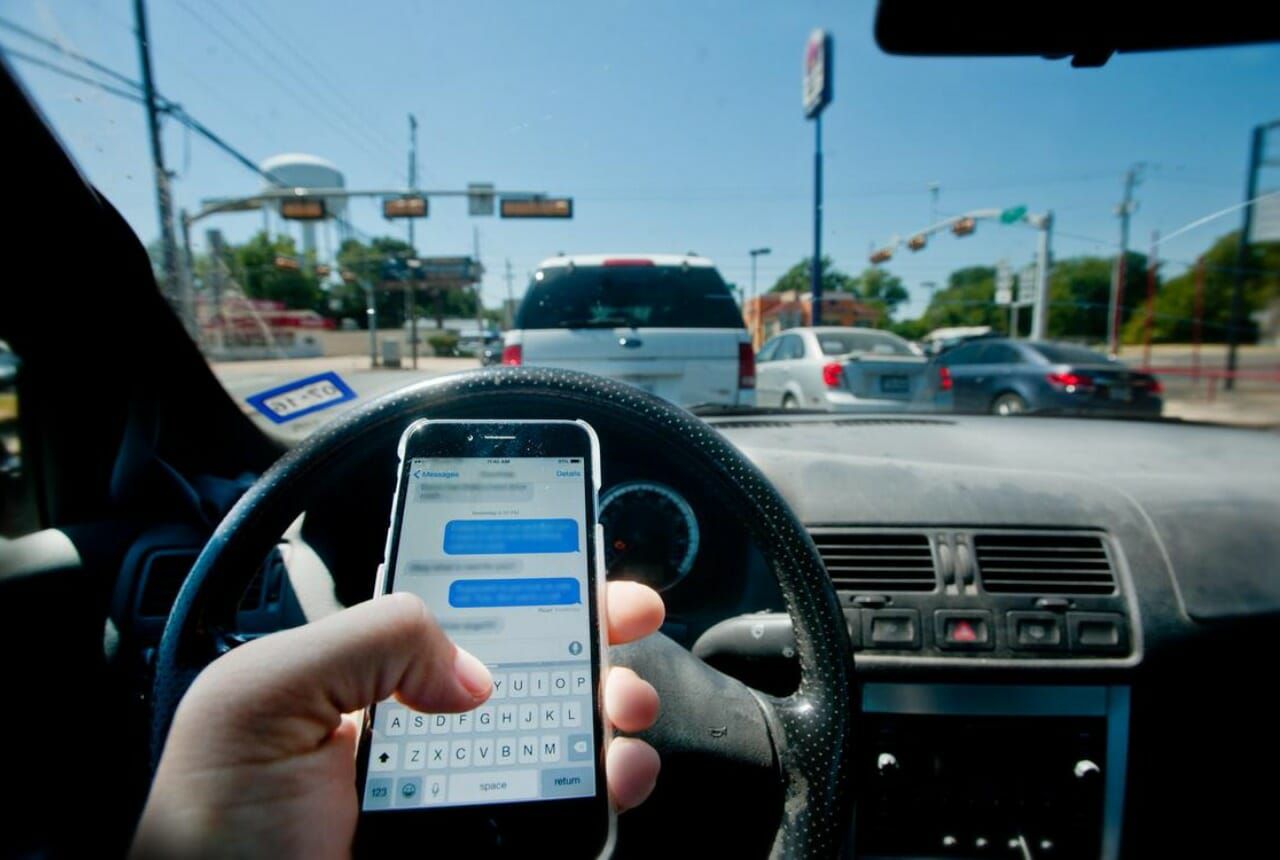 Nearly everyone with a smartphone has sent a quick "OMW" text while behind the wheel. But few recognize the danger they everyone around them in when they take their eyes off the road. So more and more states are cracking down on the penalties placed on distracted drivers. But phone-addicted motorists still view the danger as less of a deterrent than the reward of refreshing their Instagram feed. Showing off their ignorance with behavior worthy of a Darwin Award, these garbage humans who caused texting and driving accidents proved that, for them, texting was far more important than arriving to their destination in one piece.

Because of the inexcusable actions of Gregory Andriotis, Logan Scherer will forever be nine years old. The fun-loving little boy was killed after Andriotis rear-ended the Scherer family's car as a result of him "texting and surfing the web." Sorting through their grief, the family founded a nonprofit called Living for Logan and concentrate their efforts on persuading drivers to keep their eyes on the road instead of on their phones.

While not all texting and driving accidents cause fatalities, nearly every single incident ends in tragedy. While Pierre St. Brice was driving down an Atlanta highway, his car was struck suddenly by a fellow teen driver guilty of operating a vehicle while distracted. Brice suffered a spinal cord injury as a result of the crash, and is now paralyzed from the neck down.

Reggie Shaw served a short stint in prison after his decision to text while driving claimed the lives of two innocent men. This was 100 percent preventable," said Shaw of the crash. "These accidents--my accident did not have to happen. This solution was simple. Just put my phone away and we would've passed each other on the road and continued with our lives."

The Same As Drunk Driving?

Demetrius Branca, father of deceased teen Anthony Branca isn't resting until the laws change and place distracted driving in the same legal class as drunk driving. Disgusted with the offending driver charged with running over his son because of a simple text exchange receiving only a six-month suspended sentence and a small fine, Branca is working to right this perceived wrong. "It's the same selfish reckless behavior that leads to the same tragic consequences," he said.

Disaster On The First Day Of School

Instead of shepherding his daughter through her final year of high school, grieving father Matt Logan is spending his days warning teens against the high price to paid for texting and driving. On the first day of her senior year, Deej logan rear-ended a school bus while firing off a text message to a friend and later died from her injuries. "For Deej, she was distracted long enough at the wrong time," said Logan. "My daughter made a choice."

Reading a text is just as dangerous as typing on the keyboard of a smartphone--a fact that Laura Maurer knows all too well. Instead of paying full attention to the road ahead, Maurer was scanning a text message before crashing into Marvin Beck's small tractor. "The guilt of taking his life...has changed me forever," said Maurer. "Part of me died--my confidence. I was an outgoing person before. Not so much anymore."

Nikki Cline will never recover from the fact that her son, Gage Edwards, died because he was carrying on a text conversation with her while operating a vehicle. "I helped cause my son's wreck" said Cline. It's a heavy burden to carry." Edwards died after overcorrecting on a curve and smashing into two trees by the side of the road.

Liz Marks paid the price for texting and driving as a young teenager. Emboldened by her belief that "everyone was doing it," Marks saw no harm in ignoring her mother's warnings against texting behind the wheel. After her accident, Marks was left blind in one eye, partially deaf and without a developed sense of smell.

For most teens, getting their driver's license is an important milestone granting much needed freedom and independence. Unfortunatey for Savannah Nash, her first week as a new driver ended in tragedy as she pulled out in front of a tractor-trailer on a Missouri highway. While officers reported that Nash was in fact wearing her seatbelt, any safety precautions were nullified by the colliding vehicle having no time to brake before crashing into the teen's sedan.

For Amanda Clark, one car accident wasn't enough to show the young teen just how dangerous texting and driving can be. Just one year after she walked away from a crash caused by her distracted driving, Clark lost control of her vehicle and was later extracted from her crumpled car. Following the incident, Clark's parents have dedicated themselves to using their daughter's death as a tragic example for young teens guilty of typing behind the wheel.

24-year-old Natasha Boggs' decision to text while driving impacted not only herself, but three young teens as well. While heavily distracted by a text conversation, Boggs drove her vehicle over the marked lane on the side of the road and struck three minors, killing two 14-year-old girls, Taylor Galloway and Amber Thomas instantly. A third victim was also treated for serious injuries sustained from the accident.

Thankfully, the vehicle that was struck in this texting and driving accident was equipped with both front and rear dash cams. Looking down at his phone, the driver of the pickup truck slams into the van before cracking his head on the windshield and actually accelerating forward. Judging from the punches he throws immediately after the incident, this distracted driver regrets his costly text.

Attempting to put a woman on blast for texting and driving, this individual thought it was a good idea to whip out his phone and record her committing the offense. After honking and shouting at the woman, the man filming while driving actually rear-ended another vehicle while his phone recorded the entire ordeal. Thankfully, both individuals survived the accident.

Amanda Umscheid never imagined that sending a simple text to her sister would result in a horrific crash and the end of Ashley Umscheid's life. "Having a Highway Patrol officer write in a police report that a text message sent at 12:04 p.m. is the reason she's dead--knowing that you were the person she was talking to at the time she was killed--isn't something that will ever go away," said Umscheid, haunted by her role in her sister's death.

For police officer John T. Gordon, one fateful motorcycle joyride proved to be his last when he came into contact with a distracted driver while traveling on Ohio State Route 4. "Before our son was killed, I never thought about people using their cell phones while driving," said Lois Gordon, mother of John Gordon. "But now, I see it everywere. We're missing the birthdays, the holidays, our son walking his daughter down the aisle. And for what? A telephone?"

When 20-year-old Jacob Young collided head-on with a church minibus on a rural road in Texas, the consequences were disastrous. Of the 14 passengers on the bus traveling home from a spring retreat, 12 were pronounced dead at the scene. "I'm sorry, I'm sorry. I was texting," said Young, immediately after the accident.

Engrossed with her phone while driving, then-17-year-old Carlee Bollig's pickup truck sped through a red light and struck the car of Charles Maurer. Bollig's failure to adhere to the traffic light caused the death of Maurer and his daughter Cassy as they traveled home from their local library. "That is a horrific trauma to go through, even as the driver who caused that incident," said responding officer Tiffany Schweigart. "You have to live with that the rest of your life."

While 19-year-old Heather Lerch was traveling home from work just as she had done countless times before, she chose to text a friend. Distracted, Lerch failed to follow the bend in the road and crashed into the guardrail. Tragically, she was killed instantly from the force of the collision.

A Colorado college student by the name of Alex Heit was exchanging text messages with a friend while driving on a winding road with a narrow, dirt shoulder. Looking down at his screen, Heit didn't realize that he was drifting into oncoming traffic before it was far too late. Overcorrecting, Heit's vehicle rolled off of the steep shoulder and he later died after receiving medical care at the North Colorado Medical Center.

While not behind the wheel of a car at the scene of her accident, this 67-year-old woman almost paid for her smartphone preoccupation with her life. Strolling down a New Jersey street, the woman tumbled down a cellar door opened by the nearby work crews and fell nearly six feet. Surprisingly, the woman survived the fall and now has a long hospital stretch ahead of her--perfect for sending as many texts as her bandaged fingers can muster.

Tragically, college student Taylor Sauer traded her life for a Facebook status update. Traveling more than 80 mph while driving home to Caldwell, Idaho from the Utah State University campus, Sauer exchanged messages with a Facebook friend before cutting the conversation short with her chilling final words. "I can't discuss this now," she wrote. "Driving and facebooking is not safe! Haha." Shortly after, Sauer struck a tanker truck and was killed instantly.