Camila Villafane
This Woman Got Dangerously Close to a Gorilla and That’s When the Unexpected Happened November 26, 2019Leave a comment 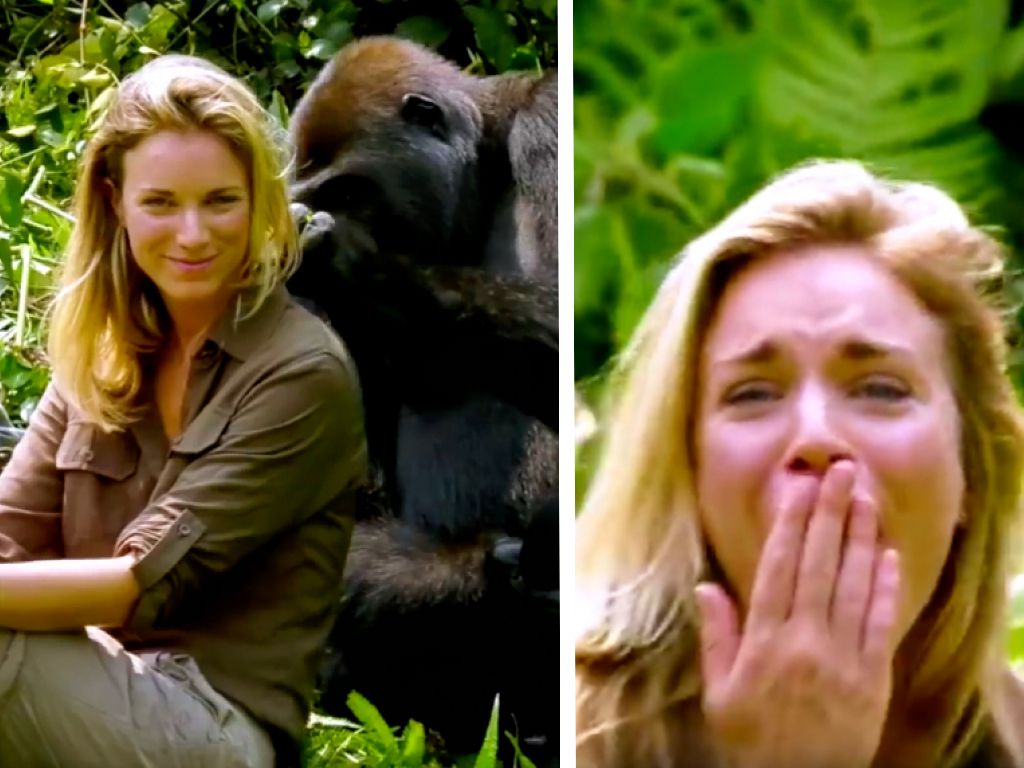 When Victoria Aspinall married her husband Damian, she learned that she had to share his heart with his animals. But then he took her to Gabon, Central Africa, to introduce her to two gorillas he had raised and released into the wild. And despite his warning, she got dangerously close, and that’s when the unexpected happened...

He Grew Up With Animals

In 1957, Damian Aspinall’s father, John Aspinall, founded the Howletts Wild Animal Park. So, Aspinall spent his childhood inside the 700-acre estate in Kent, England. In fact, Aspinall claims that a surrogate gorilla mother helped him climb down from a tree he was stuck in. It’s too bad she wasn’t around when his wife got dangerously close to a gorilla years later.

They Provide a Safe Haven

The Howletts Wild Animal Park organization provides a safe haven for gorillas. They also ensure the survival of the species by reintroducing bred gorillas back into the wild at the Plateau Bateke National Park in Gabon, Central Africa. When Aspinall’s father passed away, he continued the legacy, but was it a mistake he would live to regret?

The Animals Kept Him Company

As a child, Aspinall was a loner among his own kind, but he was definitely popular with wild animals. “I’ve always felt disconnected, and humans inevitably let you down – animals never do. There’s more of an honesty and purity there,” Aspinall told Daily Mail. He never imagined his love for animals would put the love of his life in danger.

The organization had several projects that involved releasing animals back into the wild, which is how Aspinall ended up raising numerous baby gorillas. He was so proud of the bond they shared that he even felt like a surrogate father. But there were two male gorillas called Djalta and Ima that really stole his heart. “Both of the gorillas were planned to be moved back into the wild in a protected habitat,” he told Daily Mail, and soon enough, his furry friends were released back to where they belonged. But he had no idea that a tense family reunion was in the cards.

He Married His Better Half in Italy

In August 2016, Aspinall married Victoria Fisher in Tuscany, Italy. She quickly learned that marrying her conservationist husband meant she also married his animals. Fisher wind up hanging out with gorillas, playing croquet with abandoned anteaters, and howling at wolves at the park. “It might sound crazy but I genuinely love the wolves as if they were my own children,” she told Daily Mail. But how Aspinall and Fisher met was actually quite an interesting story.

She Had No Idea Who He Was

Fisher had no idea who Aspinall was when she agreed to go out on a date with him. “He asked me for lunch the same week [we met] and normally I would have said no,” she explained. “But I found him intriguing. He’s one of those guys who captures your attention immediately.” She might have changed her mind if she had known what fate had in store for her, though.

She Was His Total Opposite

Fisher was a city slicker and a management consultant with a master’s degree in chemistry.  She was also a business executive. So, spending a lot of time with wild animals wasn’t something she ever imagined for her future. But destiny had put her on a perilous path. She just didn’t know it yet.

He Wanted to Relocate His Kids

Djalta and Ima said goodbye to the man who raised them in 2003. But by June 2017, Aspinall was eager to find out more about their whereabouts. It wasn’t the first time he had gone on a mission to find them since they had been released into the wild. But this time, he brought his wife along. And he warned her there was danger ahead.

He Feared They Wouldn’t Remember Him

Aspinall spent a lot of time bonding with Djalta and Ima while they were living at Howletts Wild Animal Park. He wondered if they would still remember him, but he feared that living in the wild for too long would cause them to react differently, especially around his wife.

Her Presence Could Be Disruptive

Adult gorillas are strong and potentially dangerous. He didn’t know how his wife’s presence would affect them. But they flew to Gabon with a team of animal experts to find Djalta and Ima anyway. They just didn’t know that the creatures were lurking deep in the woods and waiting to come out.

Tracking Them Down Was Hard

The couple hiked across a challenging terrain and journeyed down the jungle’s river on a boat. Thankfully, Djalta and Ima were tagged with GPS locators. But the team had already spent hours searching for them and they were nowhere to be found. But Fisher’s date with danger wasn’t canceled yet.

They Used Drones to Search for Them

The jungle was dense, so the team used drones that relayed footage to Aspinall’s phone. And eventually, they were able to find the gorillas. But would they welcome him and his wife with open arms, or would they attack?

The Gorillas Approached the River Bank

The drones lured the gorillas out of hiding. The creatures made their way to the river bank, which was the perfect spot for Aspinall and the team to approach with their boat. But they hadn’t seen a human in years. He couldn't help but fear they would attack without provocation, but he still wanted to get as close as possible.

The Gorillas Spotted the Boat

Djalta and Ima spotted the boat carrying Aspinall’s team. The gorillas appeared intrigued, but everyone knew that a wild animals’ behavior could change quickly. And that’s just what the couple discovered firsthand.

They Made a Startling Noise

Aspinall feared the boat’s motor would startle the gorillas, so he exited and walked across the river. When he arrived on the shore, he laid low on the ground so he wouldn’t appear threatening by standing up. Then he heard them make a sound similar to a gurgle or a grunt and it shook him to the core.

He Introduced Them to His Wife

Fisher stepped into waist-high waters and approached the river bank. “I decided to gently ease my way ashore. I didn’t want to frighten them and I wanted to make sure that they were relaxed,” she told Daily Mail. But things didn’t go quite the way they had expected.

He Told Her It Was Safe Now

He instructed his wife to stay still once she was a few feet from shore. He waited nervously to see if the gorillas would react aggressively. Then they made a friendly gurgling sound towards her. So, he told her to approach the rest of the way, but was his decision too rash?

The Gorillas Grabbed Her

Suddenly, one of the gorillas nuzzled her with his face. It was a sign they had accepted her. Then, both gorillas welcomed her with open arms. After bonding for a bit, it was time for Aspinall and Fisher to leave. But this wasn’t the last time they would see the gorillas.

One of Them Rushed Towards Her...

The Aspinalls returned the next day and found the gorillas in the same spot. Ima rushed towards Fisher, made some happy noises and then hugged her. But then, something else happened that really took her breath away.

Ima took Fisher’s hat, gave it a sniff, and then placed it on his head. The adorable exchange was captured on film and uploaded on YouTube. The video was viewed over 21 million times and got 163,000 likes. But one wrong move could have turned this into a tragedy.

Gorillas tend to shy away from humans, but they won't think twice about using their strength against a threat. One wrong move is all it takes to provoke a gorilla. Even a harmless body movement can be perceived as an aggressive posture. But was the threat really over?

A Misunderstanding Can Be Disastrous

A misunderstanding between a human and a gorilla could cause the animal to aggressively roar or react with a bluff charge, which is when a gorilla charges at someone and then stops a meter from its target. There are a lot of things that could have gone wrong with Fisher’s introduction.

Had Fisher been startled and attempted to run away, the gorillas would have run after her. Gorillas are fast on their feet and can catch up to a human. Once caught, the animal may bite the first body part it sees. But did Fisher leave the island in one piece?

Fisher’s introduction went really well, which is one of the reasons why she’s continuing to work along her husband to restore eco-systems damaged by humans. That way, animals like Djalta and Ima can thrive. But her newfound love for primates wasn’t limited to these two gorillas.

She’s Gotten Closer to Other Primates

Fisher’s experience with Djalta and Ima allowed her to feel closer to other primates. On Instagram, Aspinall posted a photo of his wife hanging with a baby baboon named Gelada, who enjoyed her piggy back ride and pulling on Fisher’s long blonde hair.