Tiny Houses That Are Totally Affordable and Totally Dreamworthy 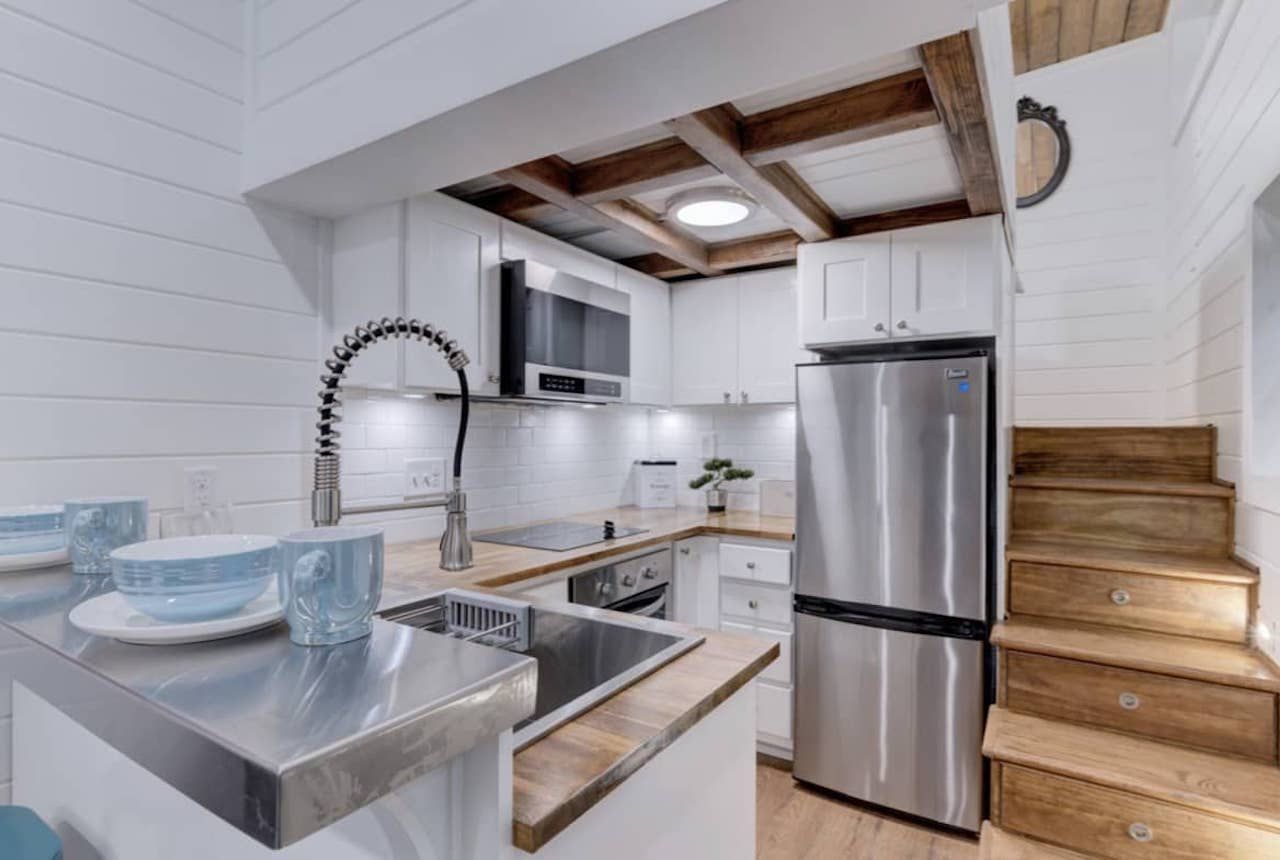 The era of the McMansion is over. People these days are all about downsizing. And the smaller the home, the better. But going small doesn’t have to mean skimping on amenities. So check out these totally affordable tiny houses that are also completely dreamy places to live.

Several years ago, a tiny movement started making big waves across the country. People who were fed up with the idea of living a life in debt just to have a piece of property they could call their own decided it was time to make a change.

Owning a home for tiny house enthusiasts has more to do with downsizing in general, and the idea that you don’t need a lot of space to have a fulfilling lifestyle. Saving costs turns out to be an added bonus.

There are different routes you can go with tiny home builds. Companies that specialize in tiny houses offer prefabricated homes or homes on wheels for around $50,000 - $100,000. But DIYing one yourself can save you a ton.

According to a 2015 survey, people who went the DIY route with their tiny houses spent an average of $23,000 on the build. It’s a fraction of what you’d spend buying one from a company, but there are options that are even cheaper.

At 136 square feet, this tiny house in Columbus, Ohio may seem to be on the small side, even for a tiny house. But it includes a loft with a full sized bed, as well as an additional partial loft for a second bedroom conversion. Its $20,000 price tag is pretty unbeatable, too.

If you’re looking for that new new, the Small Dome kit from Easy Dome might be a great option for you. While it will require some work on your part (the kit does not include the foundation, interior or exterior finishes, or a bathroom and kitchen), it’s one of the largest options you’ll find — 270 square feet — for about $13,000.

The owner of this converted tiny house completely gutted and rebuilt an old travel trailer into a perfect studio space for off-grid living. It’s a pretty good size, at 160 square feet, and it’s completely mobile, which makes that vagabond lifestyle you’ve always dreamed of well within reach.

If you plan to go the DIY route, Pin-Up Houses offers a ton of different blueprint plans to suit any style of tiny living. The blueprints range in price from around $150 - $600, and construction on the building will set you back a few grand, depending on size and location.

This tiny cabin in Corsicana, Texas has room to spare at 260 square feet. It’s also got two full loft spaces and a full-sized shower, which — honestly — is a pretty big deal for a tiny house. And it still comes in under $15,000.

Macy Miller started with a $500 RV and wound up with a pretty luxe tiny home two years and not that many thousands of dollars later. Her 196 square foot house is made mostly from upcycled materials, including old shipping pallets, and has radiant floor heating throughout. Turns out 196 square feet is big enough for an entire family, plus a giant Great Dane.

Liberation Tiny Homes offers shell pricing in three separate stages: Their most basic package includes the trailer, 2x4 framing, and home wrap and costs between $10,000 and $22,000, depending on size. If you want the entire finished kit, you’re looking at another $10,000, which still happens to be incredibly priced.

The Kaladin is 128 square feet of tiny, cozy luxury. Starting at $15,000, it comes equipped with 10 foot ceilings in the kitchen and 7 foot ceilings in the bathroom, so you won’t feel like a giant person in a tiny space. It comes with options, too, like a composting toilet, tankless water heater, and solar panel setup.

Maybe a “house” is a little too mainstream for you. There’s always the Mongolian yurt option. Fire is a nonprofit organization out of Flagstaff, Arizona that’s been working with Mongolian artisans since 1999. And you can have one for just $7200.

Shelter Wise is a company out of Portland, Oregon that’s been creating tiny homes since 2012. All of their houses are designed to be energy efficient, and they’re absolutely affordable, too. Plans begin at $79, and their Cider House model — at 243 square feet over three levels — starts at $17,500.

If you’ve been toying with the idea of a tiny house, but aren’t quite ready to take the plunge into full-time tiny living, this $12,000 Gypsy Glamper may be the perfect option. At only 36 square feet, it is tiny, but it’s also a great alternative to a camping trailer for weekend getaways.

“After a few too many glasses of wine on New Year's Eve, I promised my soon to be wife that I would build her a tree house on our property,” Dave Herrle says about the tiny house he built. The entire project cost only $4000, and after six weeks, Herrle and his wife had their very own home away from home.

Another travel-trailer-turned-tiny-house, this $12,500 home is what used to be a 25 foot toy hauler. Of course, the entire thing has been redone, from the addition of fiberglass insulation and AC system to converting the appliances to 120V so as to avoid the need for propane.

If there’s one thing that can be learned from the tiny house movement, it’s that basically anything can be transformed into a tiny house, including an old school bus. With 195 square feet of usable space, this $11,500 home-to-be is chock full of charm.

At $16,500, this tiny house has the look and feel of a miniature cabin and is completely move-in ready. Its twin roofing system allows for the future build of a second story, too, just in case its 144 square foot design winds up being too tiny.

With plans that start at about $7,000 (you’ll get blueprints and a trailer), 84 Tiny Living offers tiny house solutions for DIYers and those who want a completely move-in ready home alike. Their homes are made from reclaimed lumber, use LED lighting, and have energy efficient appliances as well.

This tiny cabin boasts 240 square feet of living space, plus an incredible tiny front porch to spend your evenings on. It’s in need of a bathroom (one can be installed for $2000), but with an $8000 price tag, it’s a manageable fix.

Another great option for those looking to have more control over their finished tiny house is a semi-finished shell. Its 192 square feet of open space gives you nothing but options, and the $7500 price tag puts the dream of home ownership a little more within reach.

This 160 square foot fully sustainable tiny house on the Alsea River in Oregon is completely outfitted with modern amenities. It has the hesitant tiny homeowner in mind, too. You can rent it for $1000 a month, everything included.

Tiny House with a View

Regardless of whether you’re looking for a mobile home or a stationary residence, it’s hard to argue with having a decent outdoor space. For $13,000, this 192 square foot house includes a substantial front porch, as well as a split level loft space.