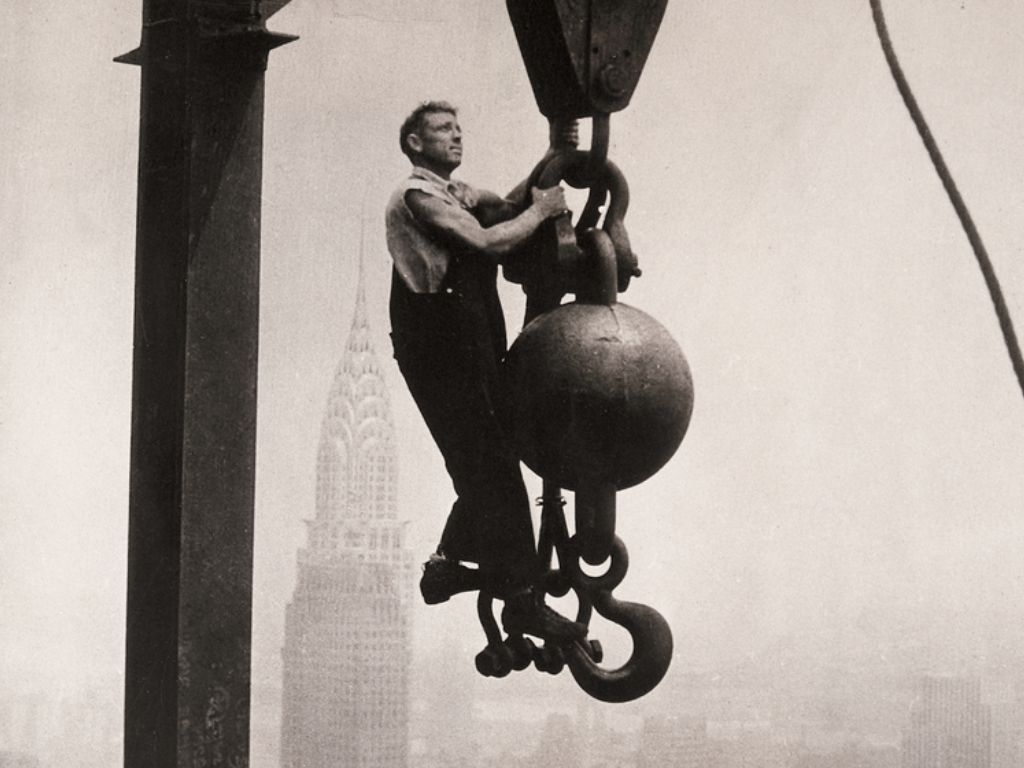 Risk assessments are a relatively recent addition to the workplace. Back in the "good old days," simply doing your job could be severely hazardous to your health - especially if you were a child at the time. Here are some terror-inducing photos of a world before health and safety went mad.

Likely taken in 1888 or 1889, this photo shows one of the many construction workers who helped bring the Eiffel Tower to life. The worker dangles carelessly from the side of a steel girder, but this pose was uncommon while actually working - notice that another worker in the top left of the photo has carefully looped one leg over the top of a steel beam to avoid falling.

Taken on January 19, 1909, this photo shows a pair of child factory workers hard at work at Bibb Mill in Macon, Georgia. Child labor was prized as smaller hands could fit in between the spinning mill to repair broken threads or replace empty bobbins, but accidents were frequent and dismemberment was not at all uncommon.

Think working as a librarian would be safer than factory work? Not necessarily. The Cincinatti Public Library, which opened in 1874 and wasn't closed until 1955, contained 60,000 books across several floors that were only accessible by small gangways and ladders. While there were safety rails, they were too low to actually stop a grown adult from plummeting to their death if anything went wrong.

Working at a dock could involve a lot of unusual safety hazards. Sometimes, as in this photo, you'd be responsible for hoisting an elephant on or off a ship. While the details of this photo are lost to history, the Tyne & Wear Archives & Museums believes that the elephant was part of a travelling fairground.

This photo, taken in 1908, shows a group of child coal miners in Gary, West Virginia. Cave-ins and gas leaks were commonplace at this time in history, and miners wore small gas lamps with exposed flames apon their headgear, which didn't exactly help protect their safety in the event of an accident.

This photo of unknown origin shows a chimney mater alongside a young chimney sweep. "Mary Poppins" paints a very unrealistic portrait of sweeps - in 1775, scientist Percivall Pott first published a paper linking soot to scrotal cancer, but the practice of sending small sweeps up chimneys didn't die off for another two hundred years. Turns out sweeps aren't as lucky as lucky can be after all.

Taken in 1903, this photo shows ice harvesters collecting their bounty before storing "ice cakes" in the ice house. Before electric refridgeration was commonplace, harvesters would cut into frigid lakes, haul their cargo across the country, and sell their goods. The money way good, provided they didn't slip on the ice and plunge into a frozen lake, which was all too common.

Another photo of ice cutters at work, this shows a pair of sleds loaded high with cakes that have been harvested from a lake in Ontario some time in the 1890s. Notice the driver who stands atop the ice sled, and who has responsibility for making sure none of the ice breaks free (and who must be very careful to keep his footing secure while doing so).

This photo, taken by Lewis Hine likely in 1930, shows a worker connecting up the expansive system of cables that were required to make the Empire State Building. On August 14, 1930, 3,439 workers were involved with various tasks on the building's construction at the same time, and reports suggest that busier periods saw over 3,500 people working per day.

Not all dangerous jobs are undertaken willingly. Here, an unamed man is shown testing a potentially dangerous new amusement ride to ensure its safety before it is deemed fit for paying customers. Nobody was particularly concerned about the tester's safety at the time, as he was an inmate on death row who had been selected for his expendability.

Likely part of a circus troupe in 1924, this man's ingenious hippo-drawn carriage is certainly a spectacle. It's also a lot more dangerous than it looks, as even in the modern era, hippos kill around 500 people a year in the continent of Africa alone. These are mean beasts.

Taken during prohibition in 1927, this photo shows a group of cops posed atop an enormous tower of confiscated bootleg liquor. Shortly after this photo was taken, the entire tower was set ablaze. Fire safety regulations weren't really a thing at the time.

This one is kind of awesome: back before the invention of a more practical solution, parks in London were maintained using a fleet of organic lawnmowers. This photo, taken in 1926, shows a shepherd with his flock on the way to a park in Kingsway. Guiding this many sheep through a bustling city was bad enough, but their droppings added yet more danger to streets that were famously overrun with manure from the many horse-drawn carriages of the era.

This photo from 1899 shows legendary scientist Nikola Tesla conducting one of his many faraday cage experiments, observing and making notes on the flow of electricity. Somehow, despite not wearing any protective gear or even choosing to move out of the way of the path of his artificial lightning, Tesla managed to survive relatively unscathed.

This photo shows an X-ray machine in the radiology department at the Cochin hospital in Paris. The doctor, Maxime Menard would eventually lose a finger operating the machine, as well as absorbing unknown amounts of radiation over several years.

Taken in Ascot, UK by Edward G Malindine in 1936, this photo shows a lion tamer for the Bertram Mills Touring Circus trying to convince her lions to play nice. It's hard to be sure whether or not she wants them to roar ferociously at her, but this kind of behavior could go awry very easily.

Taken in around 1890, this photo shows the enormous "Telefontornet" in Stockholme, Sweden. This huge tower connected around 5,500 telephone lines and was over 250 feet tall. It had to be maintained by hand, and was particularly dangerous during winter months when it was slippery from ice and snow.

The Hindenburg distaster at Lakehurst, New Jersey on May 6, 1937 was an enormous tragedy, but constructing the enormous zeppelin was a dangerous mission in and of itself. Here, workers can be seen high up in the air, putting the finishing touches on the ill-fated blimp.

The National Filling Factory in Chilwell, England in 1917. Workers were responsible for filling missiles and other ammunition with explosives - and had to try very hard not to knock anything over and cause a major catastrophe.

This worker in the National Filling Factory in 1917 is handling nitrate ammonia, a dangerous and potent chemical that's included in a variety of powerful explosives. In spite of this, the worker lacks any kind of protective clothing.

Lunch atop a Skyscraper

Here it is: "Lunch atop a Skyscraper," the most famous photo of unsafe working conditions in history. Taken in 1932, for many years the photo's author was unknown, but from 2003 onwards it has been attributed to Charles C. Ebbets. While it looks authentic, the picture was actualy posed - ordinarily, workers wouldn't all line up quite so close together for lunch.

Chemists working at the National Filling Factory in 1917 were responsible for mixing various hazardous chemicals, ready for inclusion in weapons. Mustard gas and other toxins were in common use in battlefields of the time, but even as theyr prepared dangerous concoctions, the women were not expected to wear any form of protective chemicals.

Finally, some protective goggles. Alas, these probably weren't enough to fully protect the welder at the National Filling Factory in 1917 from sparks - notice her lack of gloves and fulll face mask. At least her hair is wrapped in a scarf to keep it out of harm's way.

These men, stood within a section of pipe above the Hoover Dam in 1935, were not the workers who actually had to install such pieces of equipment. Instead, these well-to-do gentlemen are posing for an impressive photo before handing the heavy lifting over to some far less financially secure workers.

An excellent example of the kind of vertigo-inspiring work that was performed while constructing the Hoover Dam, this photo from 1935 shows "highscalers" using jackhammers to clear sections of rock from the side of the dam.