Sophie Dunne and Emily Gadsby
These Vintage Photos From the 1950s Show How Different Life Was Back Then August 23, 2019 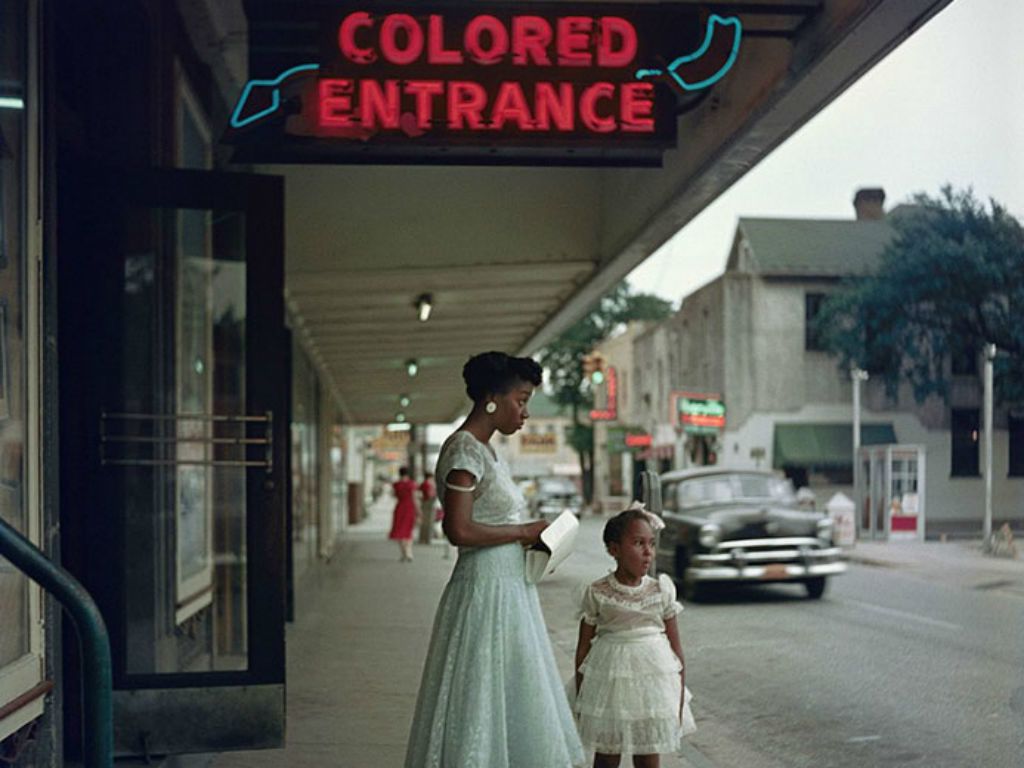 There's no denying that the conveniences of modern life makes everything easier. But it doesn't strike most people on a regular basis how far we've come as a society. Check out these vintage photos from the 1950s to see just how different our daily life has become...

70 years ago, women were considered their husband's property. Instead of living a life for herslf, the average 1950s woman lived for her husband and children. The ideal suburban housewife focused on producing more men to be like their father, making a house a home and preparing meals for her family.

Life as a Secretary

Following on from the previous image, if women did leave the house to pursue work, they most likely worked as a sectretary. The role of secretary in the 1950s was heavily associated with young women who in hindsight are often considered to have been glorified servants and subservient to their male bosses.

Long before Uber hit the App store, women were slipping behind the wheel to shuttle carless passengers to their destinations. It's almost impossible to imagine--how did Americans ever hail a cab without the unsettling driver/passenger five-star rating system in place? Be thankful you're living in an age where you can hitch a ride to work without ever having to make eye contact with the stranger behind the wheel.

Why, just why? These pointy bras were all the rage in the 1950s, adding cupsizes to women's busts. This fashion trend was influenced by Hollywood's most famous, such as Marilyn Monoroe and Patti Page.

1950s soda shops: where teenagers hung out, danced, courted (hooked up) and drank soda. Ah, the innocence. There were no distracting iPhones while they socialized, so teenagers in the 50s actually had to talk to each other!

Yes, hula girls were DEFINITELY a thing long before Moana belted out "How Far I'll Go" into the "line where the sky meets the sea." With foam-capped waves rolling in the distance, this 1956 hula girl proves that little has changed in the decades prior to Disney thrusting island life into the mainstream (looking at you, "Lilo and Stitch").

The Birth of the Civil Rights Movement

America in the mid 1950s saw the onset of the civil rights movement which paved the way for equality among races. This image portrays the activism at that time as protestors were photographed marching for the rights of black children in schools.

Whether you were on a first date or with your family on a Saturday night, drive-in movies are a beloved 1950s American past-time that we need to bring back. Back then, this quirky movie theatre experience was a well known make-out point and also a perfect way to show off your new wheels to everyone in town.

68 years after it was taken, this photo still manages to speak directly to my soul. Advertising a storefront for larger gentleman, the sign reads, "If everybody were fat there would be no war." Apparently, before Netflix-and-binge, Americans were chill with just straight binging. So pick up the tub of ice cream and get to it--knowing all the while that your late-night snack session is contributing to world peace.

It's the 1950s, and the goal is to exercise while doing as little movement as possible. Your mind-set is not to exercise your muscles so that they tone up, but instead the objective is to be flattened by a bunch of rolling pins while doing absolutley nothing.

Can you imagine Dwayne Johnson on one of these tiny bicycles? No, me neither! Luckily today our gyms are furnished with more realistic and user friendly equipment.

The Facebook hive of mommy bloggers hell-bent on shaming any mother who gives their child chicken nuggets would have a field day with this picture. Comparing this car seat shot with the safety standards of today, it's a miracle that any American reached adulthood in the 1950s. That middle steel bar DOES look extra safe, though.

Look at All That Leg Room

Flying in the 1950s was a luxurious experience with three to six inches of extra legroom, spacious seats, plus meals and drinks were included in the ticket. Anyone who has ever been on a flight today and is looking at this image now, will know just how much times have changed.

Smokes on a Plane

Speaking of planes, smoking on a plane was perfectly legal and was encouraged as there were ashtrays located in the seat's arm rests. Second hand smoking or a potential fire onboard never crossed anyone's mind in the 1950s.

Just like today, citizens of 1950s America enjoyed sitting down and passing an afternoon away with a bottle of Coke in hand. Thankfully, the actual cocaine was removed from the product by this point. With a wooden porch and shingles, this Alabama storefront is far removed from the cookie-cutter gas stations currently scattered across the nation.

This image shows a psychiatric patient undergoing treatment in the 1950s. During stress, the patient is strapped into the suspended chair and spun around rapidly in order to calm the patient down and determine their state of mind because "a normal patient would be dizzy but a psychotic would not." Fortunately, our attitudes towards mental illness have changed.

The advancements in science and medicine is evident after looking at this photo. After the outbreak of polio in the 1940s and 50s, patients used iron lungs to assist with breathing. Today, modern medicine has replaced this method of treatment with ventilators.

Rebel Without A Cause

There's no questioning that James Dean was the MAN of the 1950s. In this photo, the "East of Eden" actor stands by his infamous "Little Bastard" Porsche just hours before his fatal crash on September 30, 1955. According to conspiracy theorists, Dean's beloved car is actually cursed, bringing bad fortune to anyone unlucky enough to come into contact with it.

A Trip to the Dentist

As if a visit to the dentist wasn't daunting enough, a huge vacuum in your face is the last thing a frightened patient needs. At least your dentist's equipment today is less traumatizing than that of the 1950s.

The simple life. With most of us today reaching our limit in our iCloud storage, it's fascinating to see the novelity in getting your picture taken in the 1950s. 25 cents for four photos, it's safe to say our generation would be broke!

It's good to see that being a bad ass bitch was still in style in the 1950s. Armed with a stiff drink, (straight out of the bottle, of course) a cigar and a fierce perm, it's clear that this women knew how to throw down long before the Women's Liberation movement of the 1970s.

The Equivelant of Online Shopping

Vis-O-Matic was a Canadian store that became popular because of its "push button" qualities similar to online shopping. Customers could browse for items on a screen in the store and make their purchase there and then. Later, the items would be delivered straight to the customer's door, making it the Pretty Little Thing of the 1950s.

Today, we can send an iMessage or use FaceTime at the drop of a hat. In the 1950s, Americans had to first find a payphone, then make sure they had enough change to make a call, get line behind dozens of other people, and when it was finally their turn, hope that the person on the otherside of the call picks up!

While the name of this man is unknown, whoever he is--I want to take him out for a cold beer and a night of chainsmoking Lucky Strikes. Far removed from the days of glitter beards and male rompers, it's clear that this man doesn't f--- around and enjoys his red meat an three fingers of scotch after a bad day. It's true what they say--a true badass never ages.

When folks were not using payphones to make calls, they were doing crazy challenges like this. Today's generation remembers The Ice Bucket Challenge and The Kylie Jenner Lip Challenge however, in the 1950s it was all about "stuffing."

Daytona Beach, Florida looking like a drive-in movie back in 1957. In this image, cars and motorbikes cruise up and down the sand while kids run around freely. This image shows the carefree attitude of the old times with much less saftety constraints than today. Also, how dirty would the sand get?!

With the iconic Empire State Building looming in the distance, it's obvious that this shot was taken on the streets of New York even though the skyline is noticably different. Perfectly in-sync with matching heels and hats, these two HBICs strut through the concrete jungle with a swagger that would make any Tumblr feminist thrust a fist-pump into the air.

No Need to Buckle Up

Another case of safety gone out the window, cars in the 1950s did not need to be fitted with a seatbelt in order to pass car saftey requirments. It also didn't matter how many were squashed into the front seat of the car either, giving us another example of differences between then and now.

I bet your 40" flat screen, colored TV is looking so good right about now. Notice how close the arm chair is to the television set, yet the Dad in this image is still perched forward in an attempt to see the screen.

High spirited, post-war nightclubs in the 1950s consisted of a live band and regularly featured performers to take centre stage singing or dancing. The nightlife scene back then was more of a performance spectacle as opposed to just patrons drinking and dancing.

Regular Trips to the Beauty Salon

Regular visits to the beauty salon instead of doing your hair by yourself at home were common in the 1950s. The idea that women always had to look their best was imminent, as many hair and makeup tutorials were offered via magazines, television and even to young girls in high school on how to stay groomed so that their husbands would not looose interest in them.

Smoking inside was the norm back in the 1950s and so were these long Cruella Devil like cigarettes. Smoking wasn't considered a danger to your health but instead, it was a fashion trend. Eating a meal at a resteraunt with clouds of heavy smoke billowing around you was as common back then as driving home after a couple of drinks.

This photo speaks for itself. Back in the 1950s, segregative practices were unfortunately still common throughout public spaces with separate entrances, drinking fountains and restrooms all part of mainstream life. This divisive practice occurred until the Civil Rights Act of 1964 sought to end racial discrimination at both the state and federal levels.