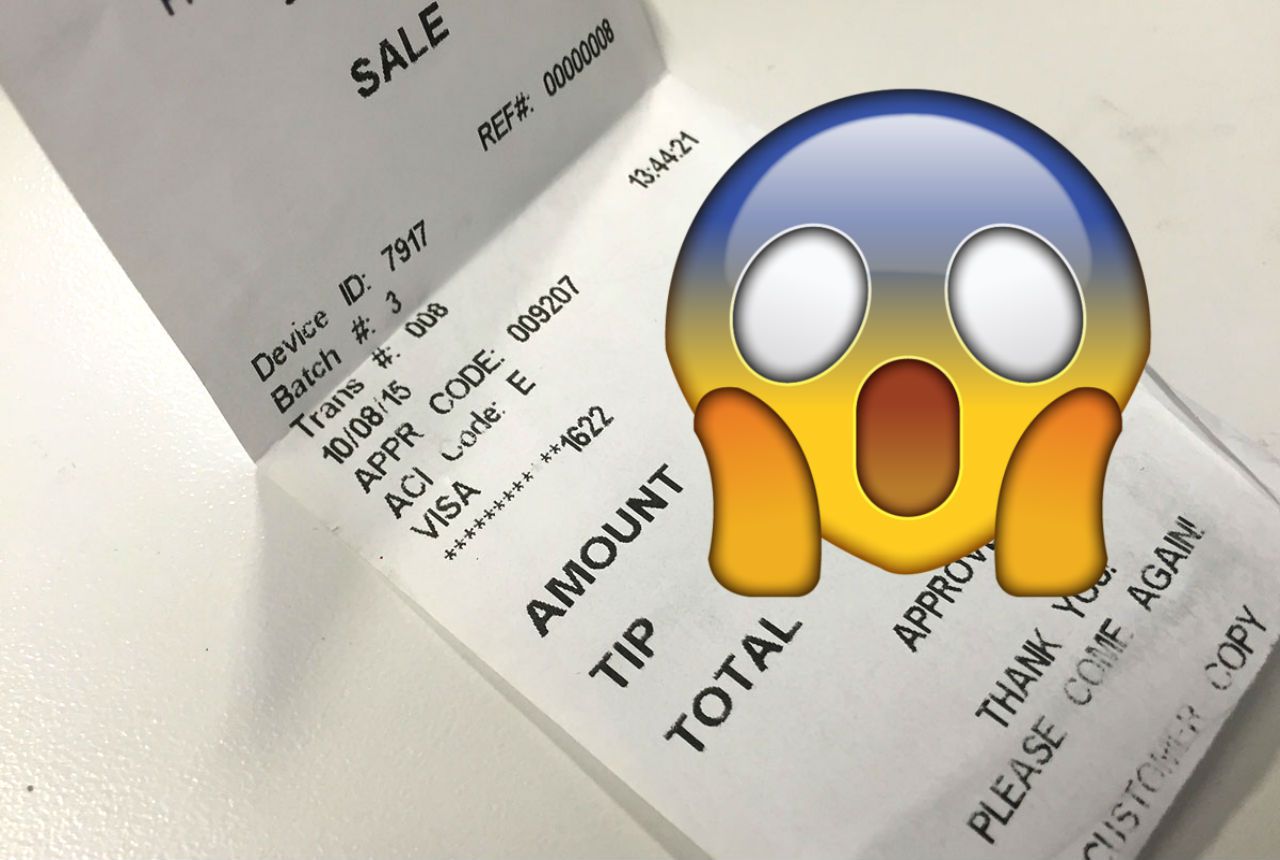 Even if your server does only an OK job, you'll still leave them a tip if you're not trash. But someday the universe may punish you for your generosity. Because this waitress ripped off a generous tipper. And she never even apologized. But wait, because the story gets worse from there...

Like most of us, restaurant diner Whitney Anderson from Salem, Virginia, handed her credit card to her server without a second thought. But it never occurred to her that her trust would be betrayed...

Some time after eating at a nearby restaurant, the mother of three took a look at her bank statement. And something didn’t make sense. The numbers didn't add up. So Anderson glanced at her expenses. And that’s when things got more confusing.

Anderson went to Abuelo’s Mexican Restaurant in Roanoke, Virginia. And she did something a lot of us do at restaurants. She didn't keep the customer copy of her receipt. But despite that oversight, she reached out to the restaurant...

Anderson called the manager and told him that the charge on her bank statement was higher than what she signed for. She had no idea there was a sinister reason behind the confusion...

People who have had part-time jobs appreciate the struggles that waiters and waitresses endure. So Anderson was always happy to tip generously. And she didn't ask for much in return either.

All a server had to do was provide service with a smile, and, like most customers, Anderson would be hooked. Good service equals good tips. It was that simple. That’s what Anderson assumed anyway. As it turned out, she was way off...

Anderson’s the kind of person who loves to spend quality time with her family. It’s why she decided to go out and enjoy a nice meal together. But the day became the catalyst for a major nightmare.

The Andersons chose Abuelo’s because of its reputation for scrumptious Mexican food. It's particularly known for its delicious quesadillas and burritos. But did the Andersons set themselves up for disappointment?

The smell of the exotic food at the restaurant made everyone’s mouths water the second they walked into the restaurant. They ordered their meals, which ended up being delicious. Everything went down smoothly. Or so they thought...

Anderson didn’t know it, but the restaurant receipt mysteriously increased overnight. The family was oblivious to what had happened. Then Anderson noticed a red flag, and gasped.

When Anderson checked her bank account the next day, she noticed some extra money missing. After taking a closer look, she realized the excess amount was from Abuelo’s. So she thought about the total she’d seen on the receipt before signing it.

She had signed the merchant copy of the receipt and handed it to the server. But she forgot to take her customer copy with her. Even so, she knew what her total was that night.

Anderson remembered the meal cost $45.50. And she tipped her waitress a generous $10, more than 20 percent. That brought the total to $55.50. But that’s not the total that she saw on her statement...

Had the waitress ripped off a woman who left her a generous tip? Anderson said the total charge on her statement was $65.50, not $55.50. So she returned to the restaurant and confronted the manager.

Anderson asked to see the merchant copy of the purchase. But the restaurant's management couldn’t oblige. Because, according to Anderson, the waitress trashed her receipt (the merchant copy) and filled out the customer copy. The tip line said $20 instead of $10. But that wasn’t the end of it...

Anderson took one look at her signature and knew it was forged. From the look of it, the signature was nothing like her original signature either. The waitress made an obvious mistake.

Understandably, Anderson was deeply hurt by the betrayal. Not just because the waitress had tried to rip her off after she'd left a great tip. But also because Anderson had been in the waitress’ shoes herself once upon a time.

Anderson was a waitress for 11 years. So she knows how important tips are. But her issue wasn’t with the waitress charging her an additional $10. It was that the waitress breached an unspoken trust when Anderson handed her the credit card.

The waitress rewarded herself an extra 25 percent tip and forged Anderson’s signature on a credit card receipt. From Anderson's perspective, that was just as bad as taking someone’s credit or debit card from their wallet or purse. But the manager wanted Anderson to wait for her money.

The manager told Anderson that he would investigate the situation and respond to her in 10 business days. But she couldn’t wait that long. So she posted on social media about what happened as a warning to others. Then the manager called her...

The restaurant manager got back to Anderson sooner than she expected. He apologized for what happened and offered to reimburse her entire check, not just the extra money the waitress had given herself. But did they understand the scope of what their waitress had done?

Not the First Time

Abuelo’s general manager, Jason McKnight, claimed the restaurant had taken Anderson’s complaint seriously and would continue to investigate the situation. But it wasn’t the first time this kind of theft happened at Abuelo's...

A Series of Victims

“The sad thing is people are messaging with me the same experiences from this waitress and she was fired from her previous job for the same thing,” Anderson wrote on Facebook. From her perspective, it wasn’t about the money. It was about integrity.

Anderson never imagined she'd have to fight so much to resolve the matter after getting ripped off. “I'm appalled that this place is not doing anything about it and allowing someone so dishonest to handle money and people's credit cards,” Anderson wrote. But one question remained...

The People Who Take

“Who knows how long she's been doing this to people that probably don't check their bank accounts regularly?” Anderson said. Anderson likely won't make the same mistake again. Make sure you don’t either.