Danny Dabiri
Weird Christmas Tree Ornaments That Nobody In Their Right Mind Would Buy November 28, 2017 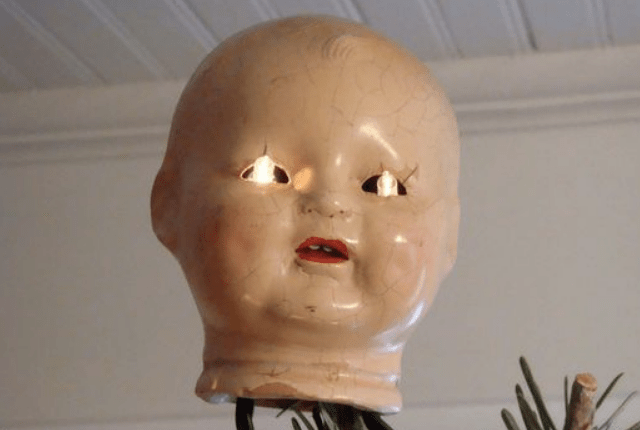 Weird Christmas tree ornaments can really show off your taste. And they make your tree completely unique. But all of these WTF ornaments are terrible. Because nobody should ever put these on a Christmas tree. From horrifying baby heads to extremely dated puns about now-over TV shows, some people really pull out all the stops trying to be creative with their trees. But shiny ball ornaments are really all you need. So here are some people who refused to kowtow to "normal" tree ornaments.

This Adorable Mouse About To Face His Inevitable Demise

"Make it even cuter. We really want the kids to feel a constant sense of doom when they look at this thing."

This is the Santa Claus that would be waiting outside of a supermarket for the Salvation Army if we lived in hell.

This Trio, Who Kill And Then Eat Children Probably

That's Nightmare Elf. He appears every Christmas when kids eat too much on Christmas Eve and get bad nightmares. Those are the Nightmare Elf's companions, snowmen that never stop dancing and never blink. Nightmare Elf will see you soon.

This Dead Santa Against A Trump For President Sign

All of this is upsetting.

Easily the most horrifying part of this sperm cell with a Santa hat on it is that it costs well more than $100 and you can buy it right now.

"What if we had super realistic-looking elves, but it's just their calcified severed heads and they look super happy to be dead?"

"Great. But we can't afford eyeballs."

This Reindeer Who Has Presents For The Houses Below

This is not only extra gross because the reindeer is just playing with its butt, but it's got four upsetting "presents" that you'll have to look at forever.

These people obviously saved more than 15 percent that year and decided to honor their favorite inexplicably-Australian insurance company mascot.

So Here's Santa Taking A Selfie

This is the absolute worst for obvious reasons. Good thing Santa knows his MySpace angles.

Who is this even for? It's dead, but it also looks pretty content. What is even going on here? This is for neither side of this political debate. This is flabbergasting.

Here's Santa Claus In A Thing

He also has a tattoo that says "Dirty Flirty" and, assuming that Santa Claus is mainly delivering presents to children, this is extremely disturbing.

Aw, It's The Human Centipede!

Say what you will about the disgusting premise for the cult-horror movie "Human Centipede," but it would make one hell of a Macy's Day Parade float.

This Santa Claus Throwing A Child Into His Abyss-Bag

Santa Claus's bag of presents is magically filled with anything anyone might want, so either a pedophile was very good this year, or this is how Santa "recruits" elves. Or this kid will be eternally lost in a bag-dimension filled only with toys and maybe cookies. And he can never escape.

Absolutely no Christmas decorations should include, allude to, or contain anything that has to do with babies.

These Are Fetuses Holding Guns

These unborn fetuses will adorn your Christmas tree and protect these United States from any terrorists that might want to attack your tree. Because they are holding AK-47s and have entire rucksacks full of weapons.

There seems to be a regular, recurring theme in weird Christmas ornaments that's mind-blowingly prevalent in actual retail stores: Sexy mermen. Why?

Listen, You Don't Need To Be "Edgy" For Christmas

This person is obviously a fan of skulls and stuff like that, but also enjoys Christmas and didn't want to have a "normal" decoration. This is their "badass" decoration which, like, it's Christmas and it doesn't need to be scary.

This Baby Head With Glowing Eyes

It's at the top of the tree and is going to stare at you every time you want a glass of water in the middle of the night. Sleep well.

Again with the edgy ornaments. Nobody needs these. And if they're going to do a lame pun, they should've really gone all-in and thrown in a few missles.

This baby looks like the one from Dead Alive, but it also has a weird rash on its cheeks and seems to be realistically hanging from the tree like a true baby. Why?

This Is A Naked, Anatomically Corrrect Santa Claus

He has no arms. If he came to life, that beard would be dreads. Homeless naked flasher Santa with a beard of dreads.

"Angel Batista," Get It?

This is Lieutenant Angel Juan Marcos Batista from the hit disappointing TV show "Dexter" as the angel that goes on top of the Christmas tree.

This set of increasingly decaying Osama Bin Ladens, created with very optimistic years of death as the Santa hat.