When Gorilla Started Acting Strangely, His Caregivers Discovered Why 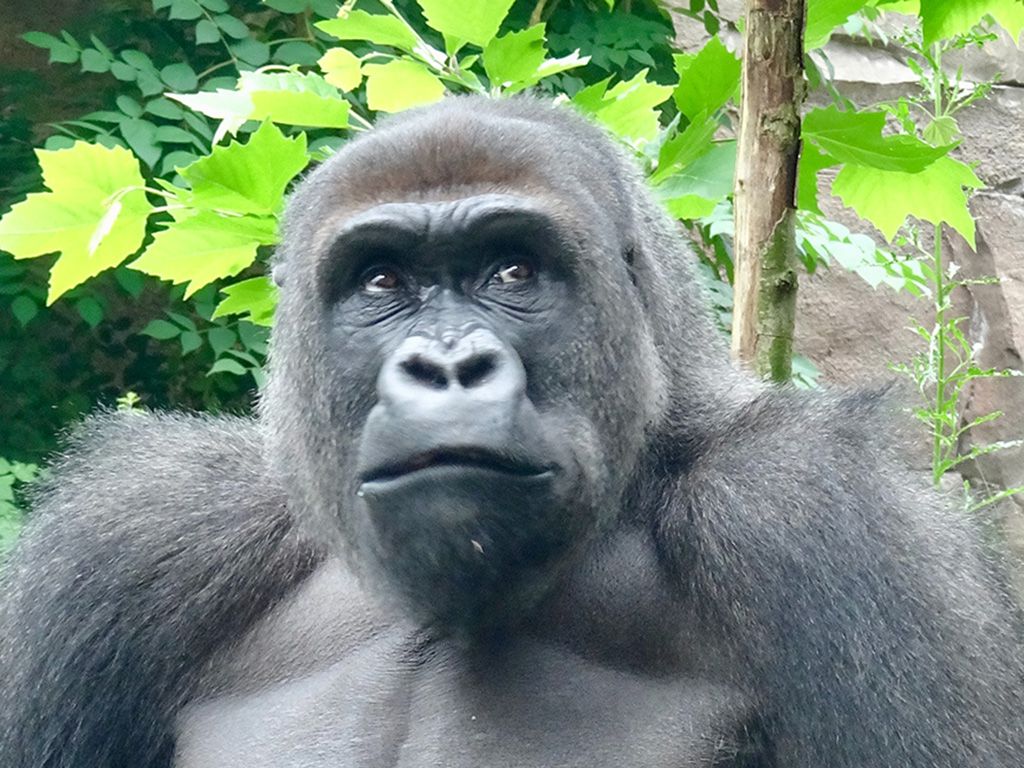 Bobo the gorilla's routine was usually typical for a primate. He would forage, eat and hang out with the other creates near him. But when he started acting in a way that was anything but normal, his caretakers sprung into action and what they discovered about their good friend Bobo shocked and stunned them.

Bobo arrived at the Mefou Primate Sanctuary when he was just two years old. Poachers who separated him from his mother left him an orphan.

After a few years, Bobo went from being a scared orphan to the sanctuary's alpha male who was fully grown. Now, no poacher would bother him.

He Had a Soft Side

With a weight of 300 pounds, Bobo might appear intimidating. However, this gorilla has a kind side that he displays to the staff, the other apes, and visitors. Bobo was the sanctuary's alpha and nobody could unseat him. He insisted that no one else should succeed him as king.

"Younger males Kibu and Nkamum once challenged Bobo for his position, but they were never successful and no longer attempt to take control," Elissa, one of Bobo's caregivers, said. Therefore, when Bobo began acting in a different way, his caregivers were very worried. What was different?

More than 300 primates in need of safety are housed at the Mefou Sanctuary, which is supported by Ape Action Africa. Since Elissa was primarily responsible for raising Bobo, she was acutely aware of any changes in his behavior. She'd have to keep a close eye on him to make sure no other primates were in jeopardy.

As the king that he is, Bobo would parade around the enclosure with pride. He used to hide out in the grass when the sanctuary's gates were closed, but recently he developed a more antisocial personality. Elissa kept a close eye on him and noticed that Bobo was actually keeping something from them. She had to identify what it was.

Now that everyone on staff was worried, they had to discover what Bobo was keeping hidden. Every primate that entered the shelter had experienced trauma of some kind. They had to ascertain what was wrong with Bobo as soon as possible in light of this. Elissa was concerned for the formerly enormous ape.

Ape Action Africa provided funding for the creation of the Mefou Primate Sanctuary due to the rise in popularity of the illegal bushmeat and animal trade. In and around Cameroon, where they have their base, they look after apes. The sanctuary's entire staff is enthusiastic about their work. Anything they can to ensure the safety of their primates.

Keeping An Eye Out

The staff has received thorough training to enable them to handle the various traumas that the primates experience. They try their best and are prepared for the majority of situations. As soon as Bobo's behavior changed, Elissa kept a close eye on him out of concern for what he might be concealing from them. In his hands, what was it?

Where Are You Bobo?

Elissa entered Bobo's long grass patch after he had finally emerged to see what he had been hiding from everyone else. She had no idea what she would uncover. She thoroughly searched the grass but was unsuccessful. She briefly believed he wasn't keeping something from her. She then understood that he was always carrying it with him rather than concealing it.

She Tried to Approach

When Elissa tried to approach Bobo, he was quick to put distance between them despite the fact that he was typically very friendly with the sanctuary staff. He was fussing over something in his hands, and eventually she was able to get close enough to see it. Bobo was tending to another living creature, not guarding some abandoned object.

Once more startled, Bobo ran into the overgrown grass when he became aware that someone was watching him. Elissa couldn't tell from a distance what the small, crying animal in the ape's hand was. In order to figure out what Bobo was up to, she would need to devise a much more clever plan.

The furry little creature being prodded and prodded by Bobo appeared completely content while perched in the paw of the enormous gorilla. Staff found this strange because they expected a rodent to scurry away more frequently. She reasoned that it might be hurt. Elissa was able to quickly determine that it wasn't a rodent by using a pair of binoculars. Actually, the tiny creature was a primate as well.

Where Did It Come From?

Given how many apes the sanctuary cared for, it makes sense that they might lose track of one or two. But not at Mefou, where they took great pride in providing each animal with personalized care. So where did the tiny primate that was resting in Bobo's hands come from if it wasn't from the sanctuary?

It's a Bush Baby

A galago was the primate they were researching. The staff came to the conclusion that the animal entered Bobo's enclosure from the nearby forest. The galago, also referred to as a "bush baby" because of the sound they make when they cry, wasn't typically the kind of primate cared for at Mefou. Even if the giant ape treated the baby primate like it was his own, they would not delegate that responsibility to him.

It Showed No Fear

Elissa remarked, "The bush baby showed no fear of Bobo, moving around his body and spending some time hopping around in a wide open grassy area before choosing to return to Bobo. But she wasn't just shocked by Bobo's treatment of the galago differently. It was extremely unusual to see a wild bush baby, especially considering that it shouldn't have been there at all.

Elissa continued, "Bush babies are typically nocturnal, so it is very uncommon to see one, and even more uncommon to witness this kind of interaction. One of the most fascinating things Elissa had ever witnessed was a galago being fed breakfast by a gorilla. Galagos almost exclusively hunt and eat in the dark. And the incident as a whole is unusual in more ways than one.

"These interactions between rescued and wild primates are unusual. They're either in the jungle or at a sanctuary. A wild primate and a rescued primate have never interacted before, "Elissa said. However, Mefou's enclosures' special placement by the forest allowed for a once-in-a-lifetime encounter between a small wildling and a large, amiable gorilla, which quickly turned into a huge draw for the other apes.

The little bush baby was content to play in Bobo's arms and would occasionally hop off to explore the nearby grass before coming back to him, according to Elissa. The other apes in the troop quickly realized what Bobo had become so preoccupied with. And a few of the more inquisitive ones drew nearer for a closer inspection.

Despite the fervent curiosity of his fellow students, Bob kept them all at a safe distance to avoid upsetting his new friend, according to Elissa. Bobo lifted the galago up to the tree branch hanging over the enclosure after recognizing the needs of the small visitor and offering him the chance to return to his natural habitat. Elissa was delighted that they had been able to record the event on film and that everything had gone smoothly with the gorillas.

The Event Was Posted

Fortunately, the sanctuary's staff had videotaped every second of the unusual interaction. With the caption, "Our silverback gorilla Bobo made a surprising new friend this week — a wild bush baby," they uploaded it to Facebook. During their morning rounds, the caregivers "found him cradling the tiny primate and were amazed to see him handling it with the utmost care."

The video received over 2,000 comments and over 1.7 million views in a short period of time after going viral. The endearing interaction between Bobo and his tiny friend touched people from all over the world and from all walks of life. The majority of people immediately pointed out that Bobo was exhibiting a trait that we could all learn from…

We Could Learn From Them

One user commented, "The human race could learn from these beautiful, thoughtful animals as these gorillas have a very nurturing and empathic nature." Another person said, "That's exactly why I love gorillas—because they're amazingly gentle giants and extremely intelligent animals. This endangered species needs to be protected because of this.

Unfortunately, projects to convert forests into industrial agriculture are putting these great apes in danger throughout the Congo basin. The eastern and western gorillas are the two types of gorillas. The eastern lowland gorilla and the mountain gorilla, as well as the western lowland gorilla and the cross river gorilla, are each split into two subspecies.

Their Skills Have Been Observed

Gorillas are very smart animals. Wild gorillas don't use tools as frequently as chimpanzees, but they have been observed using sticks to measure the depth of water, bamboo as ladders to help young gorillas climb, and most recently, gorillas were observed for the first time using sticks to eat ants without getting stung. The gorilla's impressive communication skills, which have been documented making about 25 different sounds, are another indication of intelligence.

Gorillas Are Close to Us

After chimpanzees and bonobos, gorillas are our closest genetically related species because we share 98.3% of our DNA with them. Regrettably, gorillas are among the most endangered species in the world. Cameroonian charitable organizations want to change that. However, as you might expect, a sanctuary of this size requires an even greater flow of funding to carry out its mission. They depend on community donations and volunteers.

Ape Action Africa was founded in 1996, but it first existed as a UK charity called CWAF, or Cameroon Wildlife Aid Fund. The charity's main objective was to enhance the living conditions for the primates kept at Yaoundé, Cameroon's Mvog-Betsi Zoo. During its first twelve years in business, CWAF expanded its mandate to include providing refuge for wild orphans of the illicit bushmeat trade, like Bobo.

Their Work is Vital

Ape Action Africa is now one of the biggest conservation initiatives of its kind in Africa, caring for more than 300 primates. In the Mefou Primate Sanctuary, one established gorilla group is known as Bobo's group. This group includes the Silverback, Bobo, two black backs, Kibu and Nkamum, three females, Jasmine, Geri, and Avishag, as well as her young Eto-fils.

Due to Bobo's rise to internet fame, more people are now aware of the suffering these animals are in as well as the nonprofit organizations that are working tirelessly to protect Cameroon's natural heritage. They do important work. One of the other main threats to the long-term survival of Cameroon's primates, besides the bushmeat trade, is habitat loss. Tropical rainforest covers more than 20 million hectares in Cameroon, but due to illegal logging and poaching, it is rapidly vanishing. But not all is lost…

There is still hope even though gorillas are still listed as an endangered species. In 1979, Sir David Attenborough made his first trip to Cameroon "The achievements of so many different groups, including communities, governments, and NGOs, are incredibly encouraging. Of course, there are still threats to mountain gorillas, so the challenge now is to make sure that these successes are maintained for a very long time."