Famous Athletes Have Crazier Diets Than You Could Ever Even Imagine

Greg Smith
Famous Athletes Have Crazier Diets Than You Could Ever Even Imagine January 14, 2019 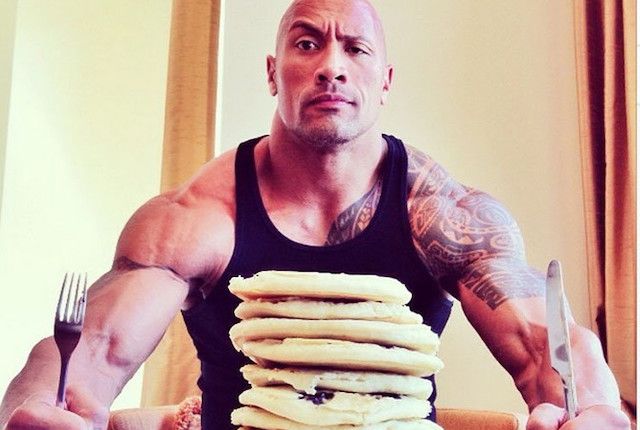 Being an athlete takes discipline. And hard work. And perseverance. Also, apparently, a crazy appetite. Because, you see, these athletes' insane diets are par for the course when it comes to making pars on a course. So I hope you came hungry.  Here's a rundown of what your fave athletes are eating, believe it or not.

Known as "the swimmer who won all of the medals", Michael Phelps ate 12,000 calories while training for the 2008 Beijing Olympics. Breakfast included, besides tons of eggs, slices of French toast and chocolate chip pancakes. Lunch entailed a pound of pasta and heavy mayo sandwiches. Dinner was often an entire pizza. And all of this was supplemented by lots of energy drinks.

One of the most celebrated to play the game, Serena Williams eats a highly controlled, regimented diet. She's vegan, doesn't eat processed sugar, and enjoys rice with hemp seeds for dinner. And yet, in 2016, she experimented, filming herself eating gourmet dog food at a hotel. It didn't end well.

During the 2008 Beijing Olympics, in which runner Usain Bolt won medals and broke world records, he once ate 100 McDonald's chicken nuggets in one day. While Bolt has since matured in his diet, hiring a personal cook and eating pasta and corned beef for his nutrients, the nugget sauces remain a mystery.

Tom Brady, aka Mr. Gisele Bundchen, aka quarterback for the New England Patriots, has a bonkers difficult diet. We'd call it the "Nothing Fun Diet" -- he avoids inflammatory foods like carbs, sweets, or alcohol in favor of alkalizing foods like fish, vegetables, and lots and lots of protein powder. He also drinks an ocean's worth of water per day.

Ace pitcher for the San Francisco Giants Tim Lincecum has his batters in and out of the box. Now that we know his diet, it makes sense. It's In-N-Out, the classic burger chain. For a meal, he eats three Double-Doubles (no lettuce, no tomatoes), two orders of French fries and a chocolate-strawberry milkshake. The grand total: 3,150 calories.

Can you smell what The Rock is cooking? Based on his Instagram posts, it's either incredibly healthy meals, or if it's cheat day, the wildest smorgasboard of yummy treats you've ever seen. Once, for a dessert, he ate five milk chocolate chip and peanut butter chip cookies with peanut butter filling. Meanwhile, we feel guilty if we have more than two Oreos.

Spencer Myers wasn't even a professional and his diet was crazy. As a college athlete, participating in both football and wrestling, Myers ate 10,000 calories per day. His pre-breakfast snack? Three protein bars, four peanut butter and jelly sandwiches, and a bag of Goldfish crackers. His post-breakfast snack? A plate of pasta, two chicken sandwiches, and a banana. You can imagine how it goes on from there.

Scott Jurek is an ultramarathoner -- he competes in events that can last 24 hours. He's also a vegan, which can be a roadblock for athletes who need high proteins and fats to compete. But Jurek perseveres with a combination of high-calorie smoothies, enormous salads, and tempeh-tofu meat substitutions. He eats like a caveman, if all a caveman did was ran all day.

Eccentric swimmer Ryan Lochte won four medals in the 2008 Beijing Olympics. During his time there, he ate McDonald's every day for breakfast, lunch, and dinner. A typical lunch included chicken nuggets, a Big Mac, and a double cheeseburger. A typical dinner was similar, with the addition of French fries and multiple burgers.

Roger Federer is one of the best to ever play tennis. And his diet is jealousy-inducingly decadent. He makes homemade waffles with raspberry syrup for breakfast. Before a match, he'll eat a classic pasta dish. And for dinner, he likes to enjoy a variety of cuisines, commenting that too regimented of a diet can lead to less pleasures in life. Game, set, and bon appetit!

When he was an NFL lineman, Nick Hardwick enjoyed an objectively ridiculous diet. He would drink three heavy protein shakes per morning. After dinner with his wife, he would pour cereal over a 32 ounce bowl of Greek yogurt. And before bed, he'd have an entire pint of Ben & Jerry's. Since retiring, Hardwick has adjusted his diet and lost 85 pounds.

How does MMA fighter Lyoto Machida stay fierce in the ring? By drinking his own urine. Yep, you read that correctly. Machida believes that drinking urine acts as a natural vaccine, cleaning out toxins of the body. He learned the practice from his father, Yoshizo Machida, a sensei and black belt fighter.

It's good to be the king. LeBron James eats well, with a game-day routine that would put five-star restaurants to shame. He enjoys egg white omeletes and gluten-free pancakes. Whole wheat pasta and vegetables. Chicken parmesean. And during the game itself, he snacks on apples with almond butter, protein shakes, and even popcorn. And at night, he tops it all off with a nice glass of red wine.

Move over Willy Wonka: Lamar Odom is the candy man. He would supply his teammates with all kinds of sugary sweets. He ate five packs of Hershey's Cookies 'n' Creme bars a day. And he kept sweets by his bed in case of nighttime cravings. Odom put it best himself: "You only live once. Eat as much candy as you can eat."

So you're learning what it takes to play basketball, football, and other well-known sports. But what about being a jockey? For Laffit Pincay Jr., it took a strict, borderline oppressive diet. He controlled everything going in to his body, maintaining a thin riding weight of 114 pounds, and torturing himself in the process. One trainer once saw him eat one half of a peanut for a snack, then six hours later, eat the other half.

NFL defensive end J. J. Watt maintains his hulking figure by consuming 9,000 calories per day. He does this by crushing up and adding supplements like avocados, sweet potatoes, and coconut oil to meals. His favorite meal? Brunch, where he can put away a whole omelet stuffed inside of a potato pancake and a piece of French toast stuffed with berries.

When competing in World's Strongest Man competitions, Hafthor Bjornsson (aka The Mountain) eats a mountain's worth of food about every two hours. This includes a full beef dinner in the morning, a Rice Krispies smoothie in the afternoon, and even raw eggs at night. Bjornsson posted his entire routine on Facebook, recommending no one try it.

For many, NFL player Dwight Freeney's diet might seem nightmarish. For him, it's "what makes him feel like Superman." He only drinks water and grape juice, with tea as a treat on occasion. When he goes to restaurants, he brings his own ingredients and instructs the chefs on how to prepare them. And he weighs himself on two scales every morning to see how he's doing.

Basketball player Derrick Rose has a personal chef. But the thorn in Rose's side remained: Sugar. He was a candy fiend, eating Skittles during every game. The candy company even installed a custom vending machine in Rose's home. During his most intense binges, Rose would eat two pounds of candy a day.

Dean Karnazes ran 50 marathons in 50 states in 50 days. And while he used to enjoy a more indulgent diet, rolling up pizzas and eclairs so he could eat them on the run, he performed this amazing feat with nothing but raw foods. A typical day for Karnazes includes full-fat Greek yogurt, bananas, and personally caught salmon.

David Carter is a 300-pound NFL defensive lineman. To maintain his weight, he used to rely on animal products. But a litany of health issues persuaded him to go vegan, and his life has changed positively ever since. But eating a 10,000-calorie-a-day vegan diet is difficult, and requires Carter to go to measures like mixing beans and sunflower seeds in his numerous protein shakes.

During his time in the NFL, Chad Ochocinco had something in common with Ryan Lochte: The McDonald's Diet. He ate it every day for breakfast, lunch, and dinner, attributing it to his on-field success. "Don't let them tell you that McDonald's is bad for you," he told ESPN. "Eat what you wanna eat and you work out the way you're supposed to."

The NBA and soda have been hand in hand for a while now -- think Grant Hill endorsing Sprite. But for Caron Butler, it verged into dangerous territory, as his proclivity to drink Mountain Dew turned into an addiction. While on the Lakers, he would hide his drinking habits from teammate Kobe Bryant, known for keeping all players in check. Butler has commented on the fact that getting off the streets has been easier than getting off Mountain Dew.

The Great Bambino had a great appetite. Legendary New York Yankee Babe Ruth would eat three hot dogs before every meal. During one double header, he ate 12 hot dogs and 8 bottles of soda as a mid-game snack. And to start his day of insane dietary choices: a morning glass of whiskey and ginger ale. Batter up.