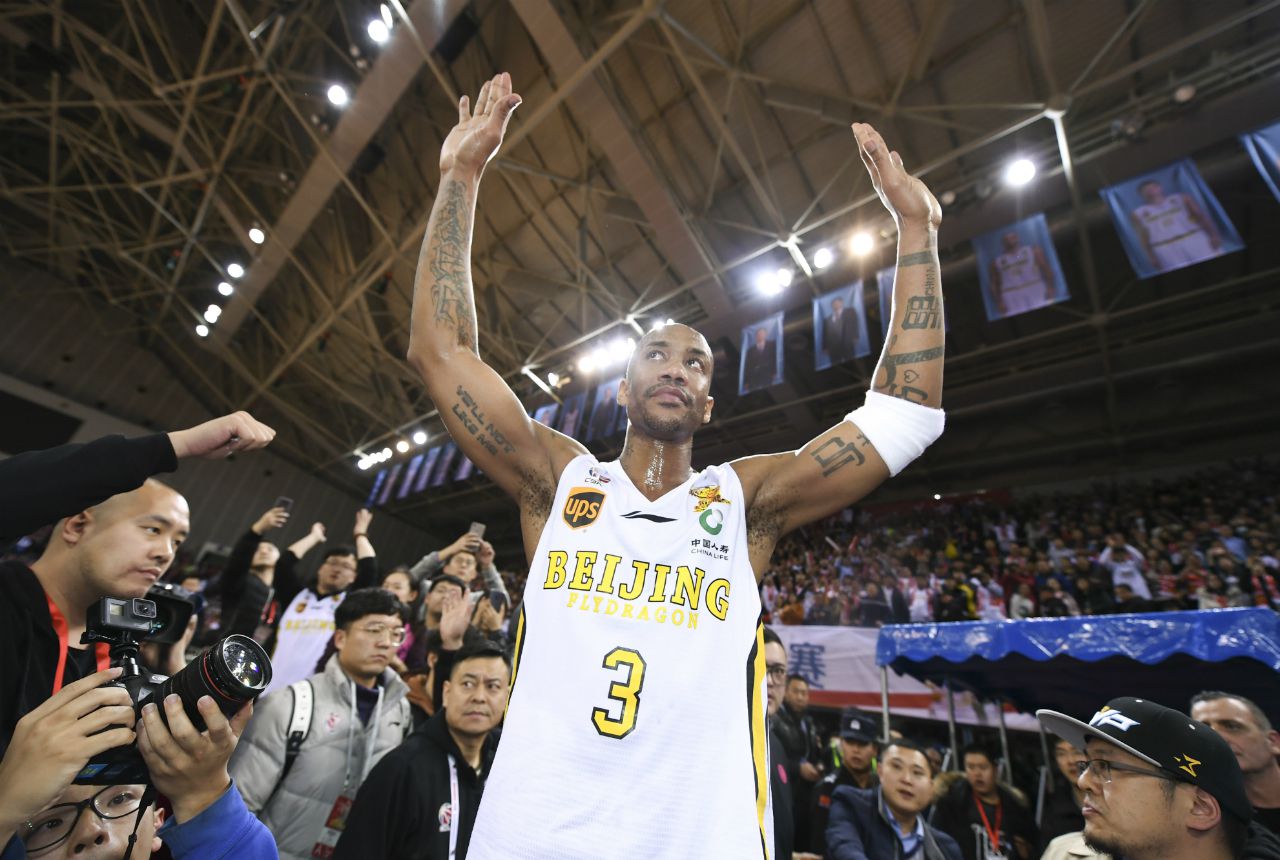 Stephon Marbury made two NBA All-Star teams and as many All-NBA squads, but never broke through to true superstardom. At least not in American. When Marbury made the move to playing basketball overseas in China, he found a whole new level of success. So his NBA achievements are nothing in comparison to the adulation he's has now as a star athlete, philanthropist and role model in his second home...

Stephon Marbury demanded the attention of the basketball world while at New York City powerhouse Abraham Lincoln High School in the Coney Island neighborhood of Brooklyn. Not only was he named to the 1995 McDonald's All-American team, he earned New York State Mr. Basketball honors and was a consensus top-five recruit.

The star point guard's exploits earned him a scholarship to play for Georgia Tech, and he did so in dominating fashion. In his lone college season, Marbury averaged 18.9 points, 4.5 assists, and 1.8 steals, helping to carry the Yellow Jackets to the Sweet 16. Months later, he was selected fourth overall in the 1996 NBA Draft by the Milwaukee Bucks, who promptly traded him to the Timberwolves for fifth overall pick Ray Allen and a future first-rounder.

Jealous of His Teammate

During the 1998-99 season, Marbury declined a maximum contract extension worth $71 million over six years. According to Timberwolves head coach Flip Saunders and members of the team's front office, Marbury grew jealous of teammate Kevin Garnett, who had already signed a $126 million deal, even though changing league rules prevented Marbury from making anywhere close to that.

Very Difficult for Him

"I think they're good friends, but Stephon indicated he had a tough time (with) the money KG was making, and when he signed his contract they'd still have the largest discrepancy as far as my 71 to his 126, and he just felt it was going to be very difficult for him, and he felt he was on equal terms," Saunders said in March 1999.

"I know Stephon," Garnett said. "I know we're always in competition with each other, whether it's basketball, girls, jewelry. I thought that was just having fun." Unable to sign Marbury to an extension in the midst of his third season, the Timberwolves sent the point guard to the New Jersey Nets in a three-team trade.

It'd be far from his last trade in the NBA. After two-plus seasons with New Jersey, in which he averaged 23 points and 8.1 assists per game but failed to lead the team to the playoffs, the Nets shipped Marbury to the Phoenix Suns with two other players for fellow star point guard Jason Kidd and Chris Dudley.

Despite posting huge numbers over the course of his 13-year NBA career, Marbury made the playoffs just five times. And he made it out of the first round just once — in his final NBA season, as a member of the 2008-09 Boston Celtics who fell to Dwight Howard's Orlando Magic in seven games in the second round.

Though he never brought an NBA title to his squads' fans, the point guard would eventually find team success overseas. In January 2010, Marbury signed with the Chinese Basketball Association's Shanxi Zhongyu Brave Dragons. He had an immediate impact, averaging 22.9 points, 9.5 assists, and 2.6 steals in 15 games.

Marbury was named an All-Star starter in his first season in China. In the contest, he dropped 30 points and dished out 10 assists to lead the North to a 133-121 victory over the South, earning game MVP honors. "I didn't expect anything before the game," Marbury said. "I just wanted to have fun here. But I do think I made some impact on this game."

Still, Marbury's Brave Dragons failed to reach the playoffs in his first season overseas. The following year, the point guard signed with the Foshan Darlions ahead of the CBA's 2010-11 season. Once again, his young squad failed to reach the postseason, but Marbury was named a starter in the All-Star contest.

Finally, in 2011-12, Marbury broke through to find team success in China. Playing for the Beijing Ducks, Marbury averaged 27 points, 6.2 assists, and 2.4 steals per game in the regular season, leading his franchise to its first CBA title. The team honored their star with a statue outside the MasterCard Center. Dennis Rodman spoke at the ceremony.

The next season, the Ducks star claimed the CBA International MVP award in the first year of the honor's existence, averaging 28.3 points, 5.8 assists, and 2.2 steals per game. Marbury then led his squad to back-to-back titles in 2014 and 2015, bringing his total to three CBA championships in a span of four seasons.

In 2007, Marbury donated $4 million to New York City — $1 million each to the police department, the fire department, emergency medical technicians, and the New York City Teacher's Fund. A year earlier, Marbury released his own line of affordable basketball shoes, under the brand Starbury, which cost less than $15 per pair.

"I want all the little kids to be happy when they're playing on the court with a fresh pair of kicks, you know what I'm saying? That's what it's really about," he told NPR of his affordable shoes in 2017. In 2014, due to his continued charity work in China, Marbury became the first international citizen to be named one of the Top 10 Model Citizens of Beijing.

Because of his exploits both on the court and in the community, Marbury is beloved in China. Not only does he have his own statue, he also starred in a 2014 musical about his life, titled "I Am Marbury," and did the same in an autobiographical 2016 film called "My Other Home."

A Mentor and Role Model

Because of his status as a mentor and role model for teammates and younger players, Marbury earned the nickname Commissioner Ma. He also successfully applied for a Chinese green card in 2014. At the time, he was one of roughly 5,000 foreigners to hold the distinction, which opened more opportunities for his businesses.

"I'm so blessed and thankful to receive my Chinese green card," Marbury wrote on Weibo, which is similar to Twitter, of receiving his green card. "I feel like my love for China is being shown in the same way. Being the first foreign basketball player to receive a green card means a lot in making history in China. Thank you so much!"

On February 11, 2018, Marbury dropped 20 points for the Beijing Fly Dragons, then retired from basketball. "So far, I love my new life in Beijing," Marbury wrote in China Daily in 2011, before receiving most of his accolades in his second home. "I am excited about the possibility of my new business venture with the Starbury Brand. But most importantly my heart is filled with love for my new extended family — the billion-plus people in China who have shown me nothing but unconditional love."

A New Lease on Life

He continued: "China has given me a new lease on life in ways I could have never imagined. I have been restored by a culture filled with love, compassion and care. Sometimes I want to pinch myself because I think I am dreaming. But reality sets in when I am reminded of how much work I still have to do. 'Choose a job that you love and you will never have to work a day in your life.' That proverb by Confucius is my take on life today."