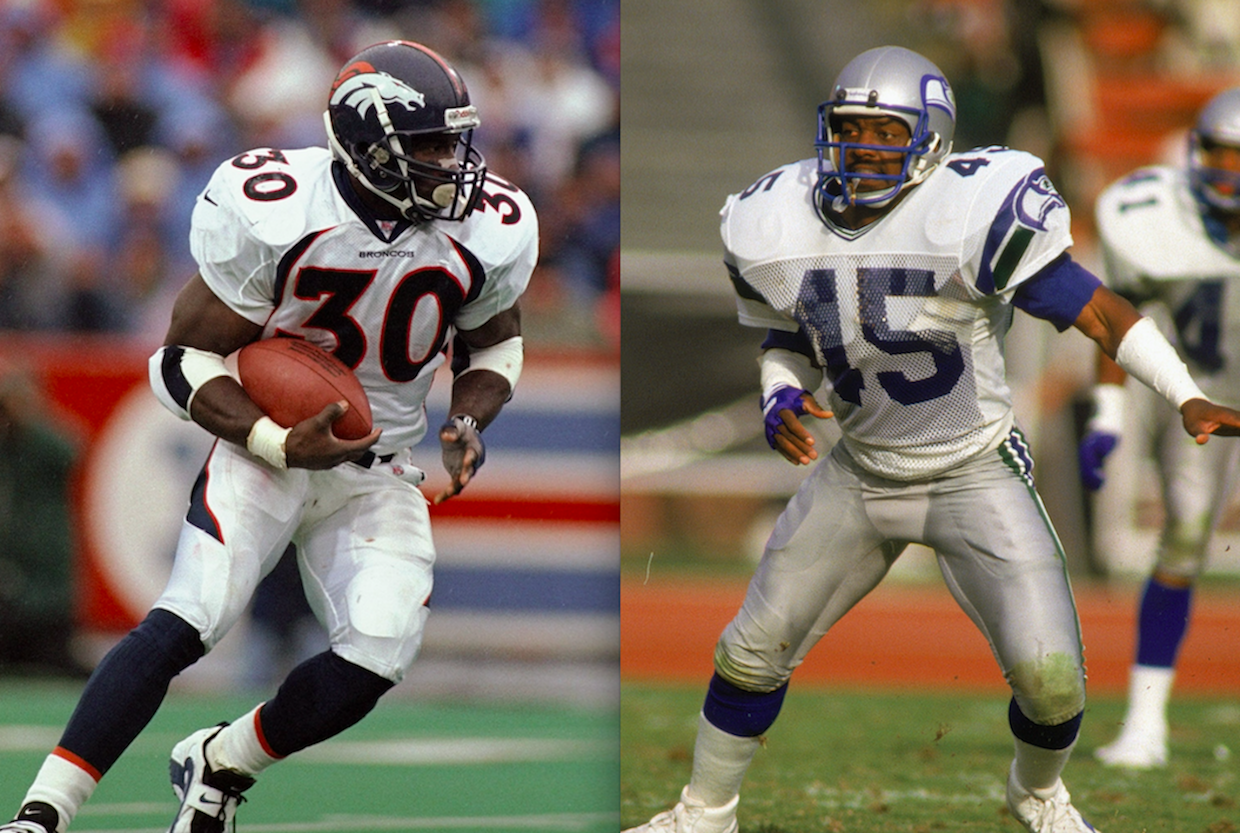 Deshaun Watson was practically unstoppable for six and a half games in 2017. Then an ACL injury struck in practice. Carson Wentz was arguably the league's MVP until he suffered the same injury during a Week 14 win. Now, with the 2018 season approaching, Texans and Eagles fans are praying their respective quarterbacks are good as new. If not, Watson and Wentz will join the ever-growing ranks of NFL stars who sadly saw their careers taken away by serious injury. While wishing they avoid such a fate, let's look back at some of the greatest NFL careers derailed by injury.

The 18th overall pick of the 1998 NFL Draft had a beastly rookie season for the Patriots, rushing for 1,115 yards, catching for 331 more, and scoring 12 total touchdowns. He set a record for consecutive games with at least one touchdown to start a career, scoring seven times in his first six games. The record's since been tied by Karlos Williams. During a rookie flag football game during Pro Bowl week, Edwards blew his knee out so badly his leg nearly had to be amputated. He made an admirable return to the NFL four years later, playing in 12 games before calling it a career.

As a rookie, the running back helped carry the Bengals to the Super Bowl, rushing for 1,066 yards and 15 scores during the regular season, then another 307 yards and three touchdowns in three playoff games, where his side fell 20-16 to the 49ers. Two games into his second season, the originator of the "Ickey Shuffle" tore his ACL. He played in 19 games over the following two seasons, and that was it.

Millard was on his way to a Hall of Fame career before a knee injury struck in 1990. In his first five seasons, Millard played in 71 games (60 starts) and had 51 sacks, including 18 quarterback takedowns behind the line of scrimmage in 1989, when he was named the Defensive Player of the Year.

Griffin was electric as a rookie in 2012, throwing for 3,200 yards, 20 touchdowns, and five interceptions in 15 games, adding another 815 yards and seven scores on the ground. But he injured his right knee in Week 14, then again in the playoffs. He took a step back statistically in 2013, then suffered a dislocated ankle in Week 2 of 2014 and played in just 12 more games in his career.

Collins was one of the NFL's best free safeties over the course of his first six seasons, making 21 interceptions and 331 tackles. He intercepted seven passes in 2008, leading the league with 295 return yards and three touchdowns off picks. But two games into the 2011 season, he suffered a herniated disc in his neck. He never played again.

Toon was named a first-team All-Pro in just his second season, amassing 1,176 receiving yards, fifth-most in the NFL, to go with eight touchdowns in 1986. Two years later he led the league with 93 catches and made his third consecutive Pro Bowl. He also suffered his first concussion that year, before getting four more over the next four seasons, forcing him into retirement at the age of 29.

The third-rounder out of Auburn was an elite back in his first five seasons, averaging 80.2 yards per game on the ground and another 36.3 through the air and scoring 40 touchdowns in 72 games, missing time to a players' strike in 1982. That season, he famously trucked Hall of Famer Ronnie Lott for what the cornerback would call the hardest hit he'd sustained in his career. "He didn't see me. The whole time I was saying to myself, This is it! Then, boom," Lott told Sports Illustrated. "I slid off of him like butter. I hit the ground, and he didn't go down. I was thinking, What?" Following a knee injury in the 1984 preseason, Andrews played in just 15 more games.

The left tackle was the No. 2 overall pick in 1995, then proceeded to make five Pro Bowls and three All-Pro first teams in his first six seasons. But a shoulder injury limited to three games in 2001. That didn't stop the Texans from selecting him first in the 2002 expansion draft, but due to his injury he never suited up for Houston.

Here's how good Cook was: Bill Walsh, who coached Hall of Fame quarterbacks Joe Montana and Steve Young, told NFL Films that Cook "could very well have been remembered or noted as the greatest quarterback of all time." Three games into his NFL career, he suffered a torn rotator cuff that went undiagnosed. He returned that season and led the league in quarterback rating, according to Pro Football Reference. But he'd play in just one more game, in 1973.

Stephenson was so dominant in his short NFL career that he still made the Hall of Fame despite making just 87 starts. The Dolphins center's offensive line allowed the fewest sacks in the league for six straight seasons, a record that doubled the previous one. The record eventually extended to nine seasons, but not with Stephenson, who retired following a knee injury in 1987.

Long before the Legion of Boom, Easley was a one-man wrecking crew in the Seahawks' defensive backfield. The strong safety played just 89 games over seven seasons starting in 1981, earning five Pro Bowl trips and three first-team All-Pro nods before a severely damaged kidney, which he attributed to large doses of painkillers, ended his career.

During his acceptance speech at his Hall of Fame induction, tight end Shannon Sharpe said he's not even the greatest football player in his family, referring to older brother Sterling. The Packers wide receiver played just seven seasons due to a neck injury sustained in 1994, but he made them count, topping 1,000 receiving yards five times and leading the league with 1,461 in 1992. He also led the NFL in receptions three times and touchdown catches twice, including in his final year, when he snagged 18 scores. Shannon implored voters to select his brother for the Hall of Fame.

The handsy running back caught 58 passes for 487 yards as a rookie in 2010, rushing for 555 more and scoring six touchdowns. The  following year, he suffered a concussion in the preseason, then another in Week 6 of the regular season. Having already suffered at least two concussions in college, he never played again.

The Kansas Comet scored 22 touchdowns as a rookie in 1965, a record that still stands, then led the league in rushing yards and yards from scrimmage a season later. In 1968, he tore multiple ligaments in his knee, and still led the NFL in rushing yards the following season. But he suffered another knee injury in the 1970 preseason, and managed just four more games.

The running back was the 1980 Offensive Rookie of the Year, rushing for 1,303 yards and receiving for 621. His 13 rushing touchdowns and 16 total both led the NFL. He was similarly dominant over the next three and a half seasons before a knee injury ended his career in 1984.

Davis had an insane first four seasons, amassing 7,594 yards from scrimmage, 61 touchdowns, and two Super Bowl rings with the Broncos. In the fourth game of his fifth season, he tore his ACL and MCL, then he played in just 17 games over the following three seasons before retiring.

When he was healthy, Sanders was one of the game's most feared safeties, claiming Defensive Player of the Year honors in 2007. However, while in the league for eight seasons, he played in more than six games just twice due to foot and knee injuries. Fortunately for the Colts, he was healthy for their playoff run following the 2006 season, defeating the Bears to become Super Bowl champs.

The multisport athlete played in just 38 games (23 starts) in his four-year NFL career, but he made those performances count, amassing 3,134 yards from scrimmage and 18 total touchdowns, all for the Raiders. In a playoff game in January 1991, he suffered a career-ending hip injury, but was able to play pro baseball for a few more seasons.

The defensive lineman was selected first overall in the 1992 NFL Draft, and he had a strong start to the season to back it up, collecting three sacks and a game-sealing 90-yard interception return for a touchdown in Week 8 in the course of his first nine games. But that season ended with a left knee injury. His next season ended with a right knee injury. And the one after that ended when he ruptured a disc in his neck. He played in just 50 games over six seasons.