Zarouhi Mikaelian
How a Small Mistake Cost an NBA Hall-of-Famer More Than $11B July 24, 2018 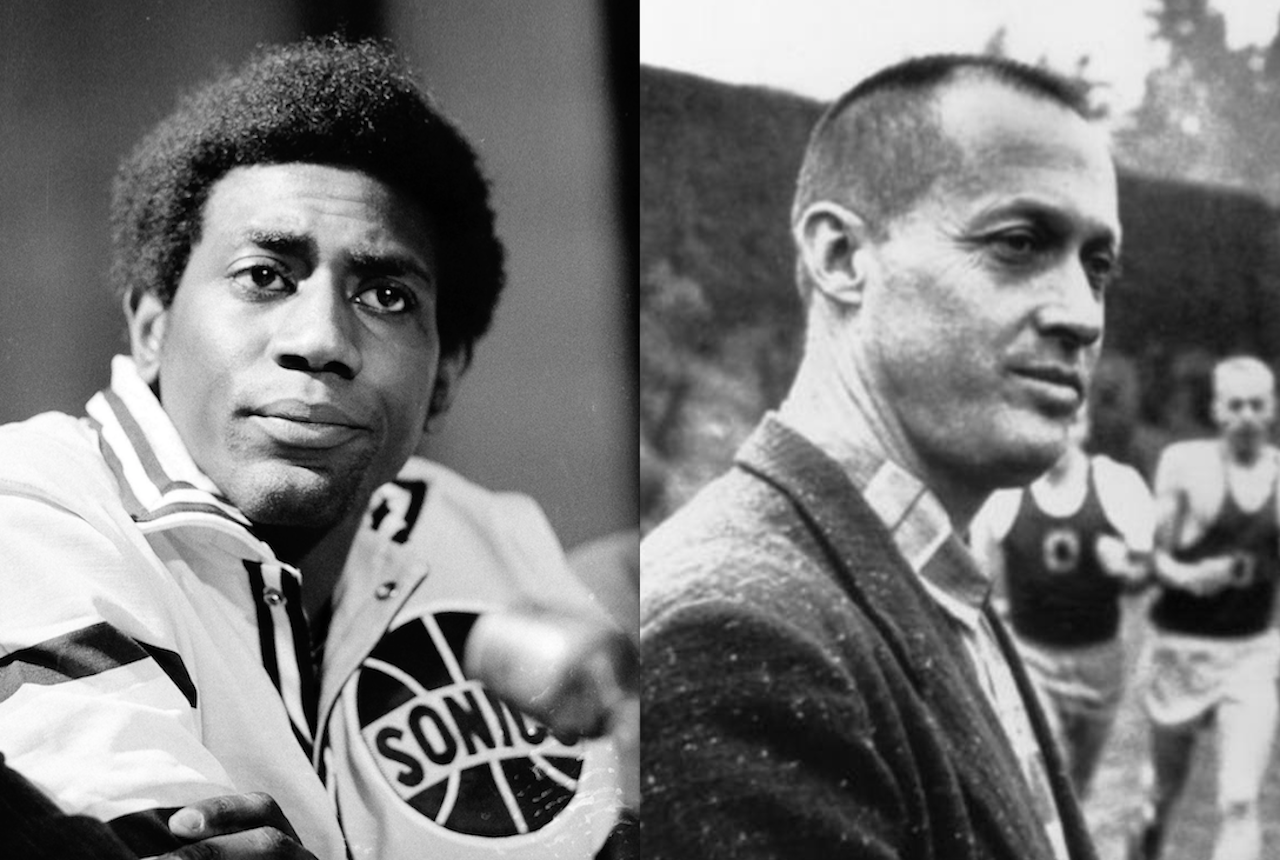 The history of Nike began when Bill Bowerman and Phil Knight met in the '50s. But an NBA Hall of Famer turned down the chance to be a part of it. And that choice cost him billions...

"I was very aware of shoes when I was running track," Knight told Stanford Magazine in 2008. "The American shoes were offshoots of tire companies. Shoes cost $5, and you would come back from a five-mile run with your feet bleeding. Then the German companies came in with $30 shoes, which were more comfortable. But Bowerman still wasn't satisfied. He believed that shaving an ounce off a pair of shoes for a guy running a mile could make a big difference. So Bowerman began making shoes himself, and since I wasn't the best guy on the team, I was the logical one to test the shoes."

Knight graduated from the University of Oregon in 1959 with a degree in journalism. He joined the Army and served a year in active duty before enrolling in the Stanford Graduate School of Business. In Frank Shallenberger's class on small business, the former middle-distance runner realized he had a passion for entrepreneurship.

"That class was an 'aha!' moment. Shallenberger defined the type of person who was an entrepreneur — and I realized he was talking to me," Knight told Stanford Magazine. "I remember after saying to myself: 'This is really what I would like to do.'" He wrote a paper titled "Can Japanese Sports Shoes Do to German Sports Shoes What Japanese Cameras Did to German Cameras?"

After earning his master's degree in 1962, Knight visited Kobe, Japan, where Onitsuka Tiger running shoes were manufactured. In a meeting with founder Kihachiro Onitsuka, Knight gained the distribution rights of the company's relatively inexpensive high-quality running shoes in the western United States. But he wouldn't receive his first samples of the shoes stateside for more than a year.

Finally, the shoes arrived. Knight sent two pairs to Bowerman, his college track coach. But Knight did more than make a quick sale — he got a partner. On January 25, 1964, the men made a handshake agreement to form Blue Ribbon Sports. Knight was to manage the business side of things, while Bowerman focused on design and improving the products.

Also in 1964, a 15-year-old from Silver City, Mississippi, left rural poverty for Chicago before landing in Detroit. There, he developed his basketball skills and went on to lead Pershing High School to the 1967 Michigan Class A championship, the first such title for a public school in 37 years. Still, he wasn't heavily recruited out of high school; his next stop was Trinidad Junior College in Colorado.

At Trinidad Junior College, he put up insane numbers, averaging 28.1 points and 22.1 rebounds. With players like Kareem Abdul-Jabbar, Elvin Hayes, and Wes Unseld boycotting the 1968 Olympic team, that kid, Spencer Haywood, earned a tryout. "I figured, hell, I'll just go down there, get me a lot of gear, go back to Detroit and say: 'Boys, I tried out,'" Haywood told the Detroit Free Press. "Lo and behold, I was the first player picked."

Haywood proved why he was Team USA's first choice: He led the squad in scoring, rebounding, and blocked shots, carrying the team to gold. His 145 points in a single Olympics were an American record until Kevin Durant broke it in 2012. "There's an asterisk by his name," Haywood joked to the Detroit Free Press. "He was shooting three-pointers, I was shooting twos."

College basketball powerhouses finally took notice of Haywood. He was choosing between UCLA and New Mexico when Detroit Mayor Jerome Cavanagh and Michigan Governor George Romney reached out to him and asked him to attend the University of Detroit; the school's coach, Bob Calihan was entering his last season. "They said they will give Will Robinson the coaching job at the University of Detroit," Haywood said of the Detroit high school basketball coach who served as his legal guardian. "They were trying to resurrect Detroit because we had just gone through the '67 riots."

Haywood was assured that after his sophomore season, the University of Detroit would hire Robinson, who'd become the first African-American head coach in NCAA Division I history. After Haywood put up 32.1 points and 21.5 rebounds per game and earned unanimous first-team All-American honors, the school passed over Robinson for another white coach, Jim Harding. Robinson still became Division I's first African-American head coach, hired by Illinois State University in 1970.

Upset about seeing Robinson spurned, Haywood resolved to leave the college ranks for the pros. "That's when it first came into my mind that I can't play here," Haywood said. "Will was a little bit angry about what they did at U-D and he said he wanted me to go to the pros. I was ready, so we packed our bags and went out to Denver."

In 1969, Haywood joined the Denver Rockets of the ABA and dominated right away — he led the league in points per game (30), rebounds per game (19.5), and minutes per game (45.3), playing in all 84 regular season games. He was named Rookie of the Year, MVP, and All-Star Game MVP, putting up 23 points, 19 rebounds, and 7 blocked in the game. Next, Haywood hoped to play in the NBA, but he wouldn't get there without a legal fight.

Back then, NBA rules prevented those not yet four years removed from graduating high school from playing. Haywood signed with the SuperSonics, who offered to pay him while he sat out a year until his eligibility. Instead, Haywood launched an antitrust suit that'd eventually go all the way to the U.S. Supreme Court. The court ruled 7-2 in favor of Haywood, and the league reached an out-of-court settlement with the power forward.

Haywood played just 33 games his rookie year. But the following season, he averaged 26.2 points and 12.7 rebounds per game, leading Seattle to a 47-35 record and landing in the 1972 NBA All-Star Game and on the All-NBA first team. Around this time, an athletic shoe company making a meteoric rise made the star center an offer that had the potential to make him a billionaire.

In 1971, Blue Ribbon Sports' relationship with Onitsuka drew to a close, and the company looked to design and manufacture their own shoes under a new brand name. Jeff Johnson, the first employee hired by Bowerman and Knight, came up with the name Nike, the Greek goddess of victory. Carolyn Davidson, a Portland State University graphic design student, designed the now-iconic Swoosh logo for $35.

A year later, Nike made $3.2 million in sales. Around this time, they approached Haywood about a sponsorship opportunity. Phil Knight and his company made the star forward an offer: Promote the shoes for either $100,000 or a 10 percent stake in the company. At the advice of his agent, Haywood took the money instead of the stake in the company. In June 2018, Forbes valued Nike's worth at $110.3 billion. Haywood's described passing on partial ownership — and up to $11.03 billion — as one of the worst decisions of his life. But he'd come to make worse ones.

Before the 1979-80 season, Haywood was traded to the Los Angeles Lakers. Around this time, he became addicted to cocaine. The big man went from averaging 20.7 points per game the year prior to 9.7 with LA. "A lot of guys around the league were doing coke, and it was getting rave reviews," Haywood wrote in a 1988 issue of People magazine. "If you were an NBA player, leeches lined up to stuff coke in your gym bag after the game." His problem got so bad, he tried to have his head coach murdered.

In the midst of the 1980 NBA Finals, Haywood passed out during practice after a night of freebasing cocaine. Lakers head coach Paul Westhead suspended him, and Haywood hired someone to assassinate the coach. "I left the Forum and drove off in my Rolls that night thinking one thought — that Westhead must die," Haywood wrote. "In the heat of anger and the daze of coke, I phoned an old friend of mine, a genuine certified gangster. ... We sat down and figured it out. Westhead lived in Palos Verdes, and we got his street address. We would sabotage his car, mess with his brake lining."

Fortunately for everyone involved, Haywood's mom talked him out of the assassination of his coach. Without Haywood, the Lakers, led by Kareem Abdul-Jabbar and a young Magic Johnson, would go on to beat the 76ers in six games for the title. Haywood played just five minutes across the first two games, scoring two points. He spent the following season playing in Italy before returning to the NBA for his last two seasons, both with the Washington Bullets.

Haywood retired in 1983. Across 15 seasons in the ABA and NBA, he averaged 20.3 points, 10.3 rebounds, and 1.8 assists per game. According to Haywood's piece in People, he entered a California rehabilitation center in 1984. He's been sober for over three decades. "To see all of that go down the drain over some little powder, it'll break your heart, it was unfair," he said in 2016.

Haywood has emerged from his missed financial opportunity and struggle with addiction even stronger. Do yourself a favor and check out his Hall of Fame induction speech from 2015, which he ended by reminding the world that he didn't just expand players' rights with his 1971 legal case: "Remember, guys. I had game. It was not like I just did this Supreme Court thing. I had some serious game. Thank you."