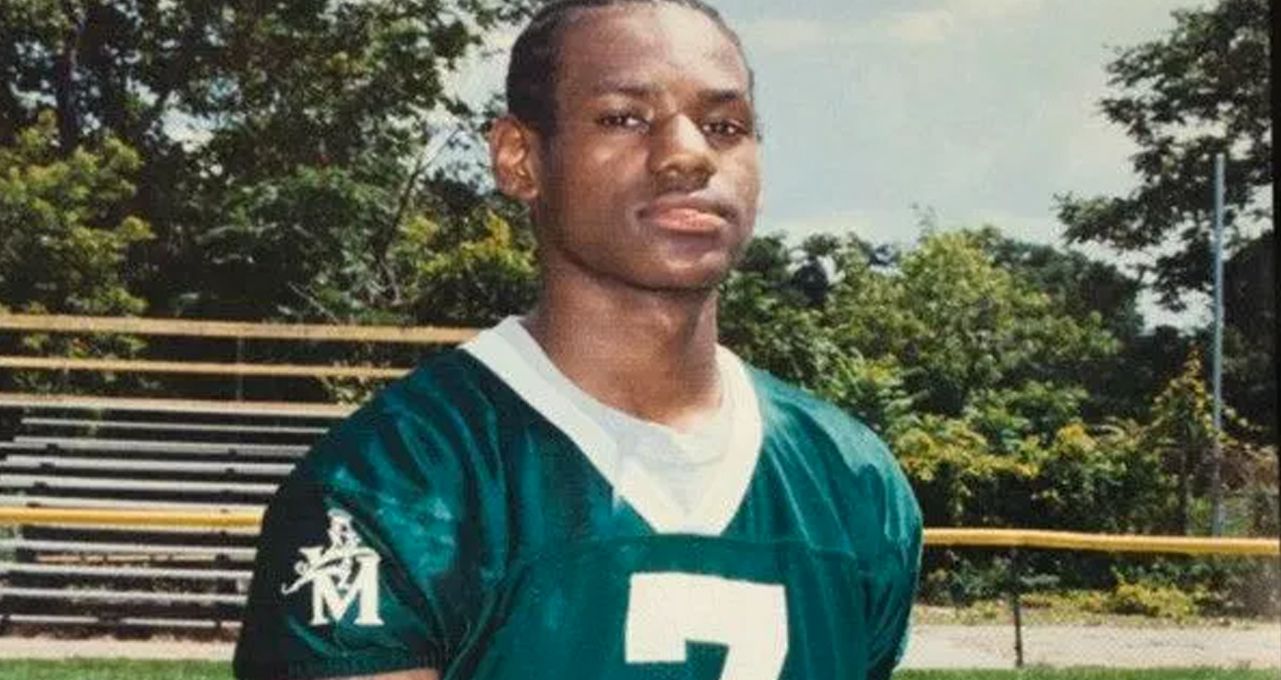 LeBron James entered the NBA as the most hyped rookie of all time. And he hasn't disappointed, claiming three titles and four MVP trophies (and counting on both fronts). He dominated the varsity ranks for four years in high school, ultimately choosing hoops over his other love: football. This is the forgotten story of LeBron James' football career

LeBron James kicked off his varsity basketball career at St. Vincent-St. Mary High School in Akron, Ohio, by averaging 18 points, 6.2 rebounds, and 3.1 steals per game as a freshman, according to Ballislife.com, leading the Fighting Irish to a 27-0 record and the Division III state title. By his sophomore season, the high school team had to play some home games at the University of Akron's Rhodes Arena to accommodate the attention their star underclassman was drawing.

James averaged 25.3 points, 7.4 rebounds, 5.5 assists, and 3.7 steals per game as a sophomore; his squad repeated as state champions, this time with a 26-1 record. James was selected to the USA Today All-USA First Team and was named was named Ohio Mr. Basketball, both firsts for a high school sophomore.

By his junior year, James was already more famous than most NBA players, gracing the cover of Sports Illustrated. He was again named Ohio Mr. Basketball and selected to the USA Today All-USA First Team. He was also the first junior to be named the boys' basketball Gatorade National Player of the Year. James averaged 29 points, 8.9 rebounds, 6 assists, and 3 steals per game, but for the only time in his high school career, St. Vincent-St. Mary didn't win a state title, losing in the Division II state championship.

Following a failed petition for the NBA to allow him to forgo his senior season, James averaged 30.4 points, 9.7 rebounds, 4.9 assists, and 2.9 steals per game as a senior. He repeated in every award previously mentioned here, and led his team to a victory in the Division II state championship.

You know what happened from there: No. 1 overall pick for his hometown team, three NBA titles, four MVPs, eight straight trips to the NBA Finals (and counting on each front), "The Decision," four years in Miami, four more years with the Cavaliers, and, finally, a new chapter of his career in Los Angeles.

But even though, or perhaps because, he's accomplished just about all there is to accomplish in the NBA, football pundits may never stop salivating over what could have been had he not decided, during his senior year of high school, to hang up his cleats and stick to the hardwood.

"I think LeBron could come in and do better than Antonio Gates," Hall of Fame receiver Randy Moss told ESPN back in 2010. "LeBron James is the athlete that comes around every so often. He's at a point in his career where the things that he does are something we haven't seen before. It's just very rare for athletes to be able to do the things that he does to entertain and wow us night in and night out."

Moss isn't alone in citing Gates' conversion from college basketball player to Hall of Fame tight end as reason enough that James could have been a football star. "You look at it and you'd have to say, having seen Tony Gonzalez and seen Antonio Gates, that the guy definitely could have played," current Titans defensive coordinator Dean Pees said in 2010. "He was a phenomenal athlete. If he wanted to play football, he certainly could've."

"I've been around a lot of great receivers," said Mark Murphy, who was an NFL safety for 11 years before serving as a defensive coordinator for James' high school team. "I tell people that I rate my top receivers — coaching, playing or watching — as James Lofton, Jerry Rice, Steve Largent and LeBron James."

Three Pro Football Hall of Famers, and LeBron James. "People laugh at me, but it's true," said Murphy, pictured here in his playing days. "The kid had everything you could want. I felt like that was one kid that could have gone from high school to the NFL and played." In addition to starring at receiver, James played quarterback on the scout team. According to Murphy, he could chuck the ball 70 yards.

James played just a little more than two full seasons of varsity high school football. In his first varsity game, James played just one quarter. "Put him in! Put him in!" Chris Wooley, James' quarterback during his freshman year, remembered telling coaches while St. Vincent-St. Mary was being shut out. "I don't care if he only knows one play or what the problem is that you won't put him in the game. Put him in."

The team lost 15-14, but James amassed over 100 yards and caught two touchdowns passes in a single quarter. In his very first start, as a freshman in the state playoffs, he set a school record with nine catches. "If I got it within a 10- to 15-yard radius, he was catching the ball," Wooley said.

"I have several buddies to this day that said I probably threw to him too much," Wooley added. "I would argue that I didn’t throw to him enough." As a 6'6" sophomore, James made 42 catches for 752 yards and 11 touchdowns. Those numbers landed him on the all-state first team.

Right before halftime of a game against Villa Angela-St. Joseph, James broke a finger while making a seven-yard touchdown catch. "He was pretty shook up at halftime," Murphy said. "He was thinking about basketball and what this was going to do. Once the trainers got him calmed down, we said 'Look, LeBron. You don't even have to play in the second half. Or we can use you as a decoy and we'll throw to the other guys if you want.'" But as the team filed out for the second half, James stopped the coaches to tell them: "I'm no decoy."

"I always said he'd be a cross between Harold Carmichael, who was the tallest receiver at the time and played for the Philadelphia Eagles at 6'8", but he had the fluidity of a Randy Moss," said Jay Brophy, a former NFL linebacker who took over St. Vincent-St. Mary's football program in James' junior year. "He glided. Like you see in basketball, the way he glides down the court, it was the same way he ran on the football field."

"He probably ran a 4.5 40 [yard dash], no problem ... I knew if he wanted to, especially with the rules nowadays in football with not being able to put your hands on receivers and not taking shots over the middle and not being able to target people, he's the kind of guy that could come out and play it," Brophy added. "There's no doubt in my mind."

As a junior, James reeled in 57 passes for 1,160 yards and 16 touchdowns, helping St. Vincent-St. Mary to the state semifinals. Naturally, his production drew the lust-filled eyes of college football powerhouses. According to Brophy, he got recruited by Ohio State, Alabama, and Miami (Florida). Urban Meyer, then a receivers coach at Notre Dame, even gave it a shot.

The current Ohio State head coach added: "The bell had just rung for class, and I stick my head out the window and you can tell who he is because he's a foot taller than everybody else walking down the hallway. He said, 'Hello, coach, I'm LeBron James.' I said, 'I'd love to have you. Why don't you come up to Notre Dame because we’d love to talk with you?' He said, 'I appreciate that.' Then we sat back down and the coach told me, 'He's done. You don’t know who that is?' I said no. 'That's the next Michael Jordan.' I'm just like, come on."

His senior year, James watched the football team's season opener from the sidelines with a broken wrist. It tortured him, but that night he resolved to focus on basketball. "It was a sacrifice because he'll tell you he liked Friday night football better than anything," said Keith Dambrot, James' high school basketball coach. "He liked basketball practice better than football practice, but he loved Friday night football."

Brophy told Bleacher Report: "I went over to him and he was in the library and I said, 'LeBron, hey, let me ask you, are you really interested in playing college football? I've got a ton of schools asking about you playing that have called me.' He said, 'Well coach, I'm 99 percent sure I'm probably going to the NBA. But I wouldn't rule it out.' He started laughing and he said, 'No coach, I'm kidding. I'm gonna play basketball.' I said, 'All right, I just wanted to know.'"

Fortunately for James, the Heat, and the Cavaliers, Meyer couldn't persuade James to commit to a life on the gridiron. "Nah, I'm fine. I'm fine with my sport I got," James said when Steelers players tried to recruit him in March. "It's pretty funny, though. I seen some of the edits that they had of me in the Steelers uniform, but I like tank tops and shorts, I'm sorry. I've tried the shoulder pads, and it was fun while it lasted, but I'm a tank top and shorts guy."