The Most Questionable MLB Awards Of All Time

Zarouhi Mikaelian
The Most Questionable MLB Awards Of All Time July 18, 2018 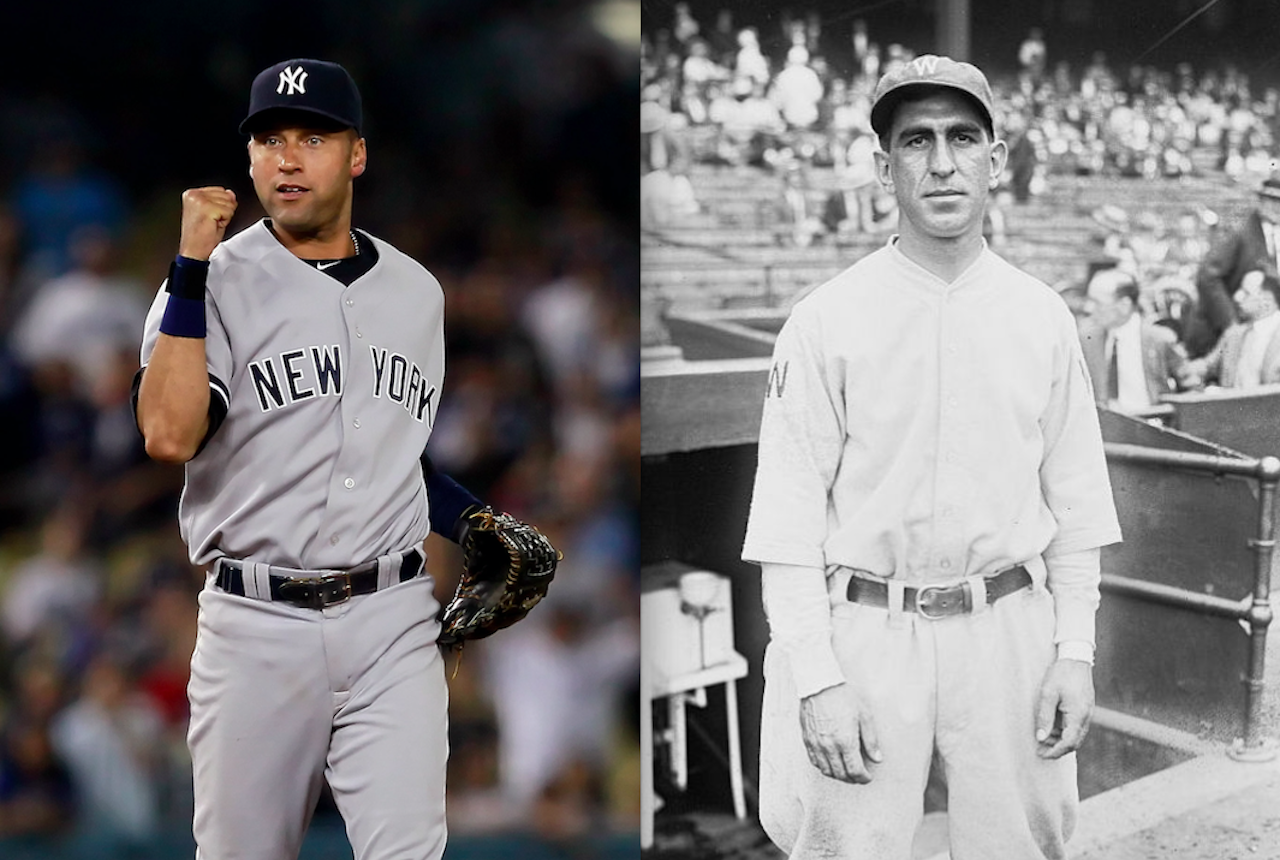 Handing out MLB awards can't be all that hard. Because baseball is basically an individual sport masquerading as a team sport, determining a player's worth should be easy. But, apparently, it's not easy. Or at least, it hasn't been. A century and a half of history has shown us that picking the most valuable players, best pitchers, and best fielders in each league has been anything but simple for the voting media; I mean, four relievers have won MVP honors! Check out our collection of the most questionable MVP, Cy Young, and Gold Glove awards handed out in MLB history.

It's comical how much better Al Simmons was than the Washington Senators shortstop. The Philadelphia Athletics center fielder had more than twice as many hits, doubles, total bases, and RBI, and hit six times as many home runs. Though Simmons, then 23, went on to a Hall of Fame career, he never won MVP.

O'Farrell's Cardinals teammate Rogers Hornsby, a player-manager, claimed the award in 1925, so perhaps voters resisted giving it to him a second time around. Hornsby wasn't the only Cardinals player to post better numbers than O'Farrell, who hit seven homers and drove in 68 runs; Les Bell and Jim Bottomley also would have been better choices.

The only thing the Yankees second baseman led the AL in for the 1942 season was strikeouts, going down 95 times. Ted Williams won the triple crown that season, doubling Gordon's home run total, scoring 53 more times, and driving in 34 more runs, but missed out on what would have been his second MVP trophy, probably because of his prickly relationship with the voting media.

Joltin' Joe had one of his worst seasons in 1947 — of the the 11 seasons in which he played in at least 120 games, his 20 homers in '47 were the fewest, and his 97 RBI were the second-fewest. For the second time in his career, Ted Williams won the triple crown and led the league in runs but didn't claim MVP, this time losing out by a single vote point, 202-201.

Every time a reliever won MVP

Pitchers can win MVPs, and relievers can win Cy Youngs, but a reliever should never be named a league's most valuable player — how valuable can you be when you pitcher fewer innings than your team has games? Still, it's happened four times: Jim Konstanty in 1950, Rollie Fingers in 1981, Willie Hernandez in 1984, and Dennis Eckersley (pictured) in 1992.

Wills set a record for steals in a season in 1962, swiping 104 and getting caught just 13 times. Voters apparently got wrapped up in the mark, ignoring Willie Mays' beastly season, in which he slashed .304/.384/.615 with 141 RBI to go with a majors-leading 49 home runs. Wills, by comparison, had just 29 extra-base hits.

The longer Torre played, the worse his reputation as a defensive catcher got, to the point that he was moved off the position after turning 30. But for whatever reason, he received a Gold Glove following the 1965 season, when he posted a WAR of -0.2, according to Baseball Reference.

Thanks to voters' obsession with pitchers' records, McCormick took the '67 award over a handful of more deserving candidates. Dick Hughes led the majors in WHIP and had a better ERA. Phil Niekro led the majors in ERA and, like Hughes, didn't even get a vote. And Jim Bunning, who should have won it, led the majors with 302.1 innings pitched, posting a 2.29 ERA, second-best in the NL.

The Hall of Famer had a handful of MVP-worthy seasons, but 1979 wasn't one of them. The subpar defensive first baseman played in only 126 games, driving in 82 runs and scoring just 60 while collecting 51 extra-base hits. He shared the award that year with Keith Hernandez, who led the majors in batting average and doubles, and led the NL in runs.

One of the worst pitchers to win a Cy Young, Stone would have a losing record ifor his career if not for his 25-7 campaign with the Orioles in 1980. As good as he was, Oakland's Mike Norris was undoubtedly better, finishing second in the league in ERA and innings pitched.

Of the nine players to receive votes for the AL Cy Young award in 1982, Vuckovich's WAR was tied for the worst, at 2.8, his usightly 1.502 WHIP was the highest, and his ERA was second-highest. Dave Stieb or Rick Sutcliffe should have taken the award, though neither would have crushed the role of Clu Haywood in "Major League."

McGee led the NL in hits, triples, and batting average in 1985, while swiping 56 bases. But Dwight Gooden assembled arguably the greatest season for a pitcher in baseball history, posting a 1.53 ERA and .0965 WHIP over 276.2 innings. Doc's 12.2 WAR as a pitcher, according to Baseball Reference, is the best mark ever, and he managed another 1.1 WAR as a batter.

A reliever needs to be untouchable to claim Cy Young honors, and Bedrosian wasn't that in 1987. He pitched to a solid 2.83 ERA and posted a majors-leading 40 saves. You'd need a second hand to count out the more deserving candidates in the NL that year, and they split the votes to leave the door open for the Phillies closer.

Voters still overrate pitchers' records despite how much luck plays into the numbers, but not as much as voters did in 1990. Welch went 27-6 to claim Cy Young honors even though a 27-year-old Roger Clemens went 21-6 with a majors-leading 1.93 ERA, which was more than a full run lower than Welch's ERA.

Lotsa guys could have taken the award home over Juan Gone in 1996: Albert Belle had more runs, hits, homers, RBI, and more than twice as many walks than did Gonzalez; Ken Griffey Jr. had more runs and homers than both guys, almost as many RBI, and one of the best gloves at a crucial position; and Alex Rodriguez led the majors in doubles and batting average, and the AL in runs scored.

Glavine had a Cy Young caliber season in 1998, but at least two guys had better years— and one of them was on his own team. Greg Maddux posted a better ERA and WHIP over more innings, as did Kevin Brown, who also had 100 more strikeouts than Glavine did. Brown probably had his vote split by Padres teammate Trevor Hoffman.

It's hard for a Gold Glove to be egregious, because performance in the field is difficult to capture statistically ... unless you're judging the fielding of Palmeiro in 1999, because the 34-year-old Rangers slugger appeared at first base in just 28 games that season, usually slotting in as a designated hitter.

Clemens was robbed in 1990, but the Rocket was doing the robbing in 2001 and 2004. In that first year, he was bested in just about every available pitching category, save for record, by Yankees teammate Mike Mussina, who didn't get a single first-place vote. Then after Clemens jumped to the NL, Randy Johnson crushed him in just about every meaningful metric, but the righty again benefitted from a shinier record.

Jeter won five Gold Gloves — in 2004, 2005, 2006, 2009, and 2010 — all after turning 30. But he posted a positive dWAR (according to Baseball Reference) in just one of those seasons. Jeter has a pair of memorable highlights to his name, and he definitely made fielding a grounder in the hole between second and third look cool, but he just was never a great fielder, particularly as he aged.

Michael Young was never a highly regarded defensive shortstop in the majors, but that didn't stop voters from handing him the hardware when he was 31. The man with a career dWAR of -10.5 posted a 0.5 that season. Most tellingly, Young was moved off shortstop, to second base, the following year.