Infamous NFL Draft Busts: Where Are They Now? 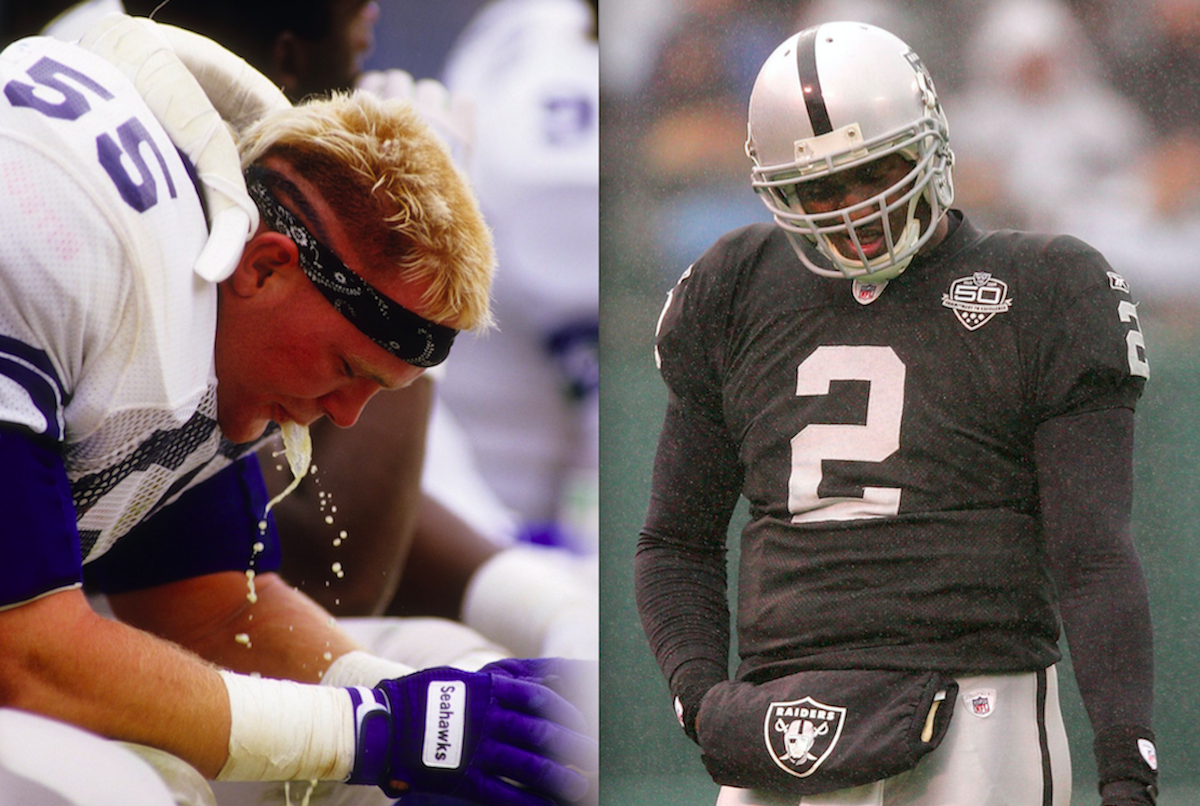 As a redshirt junior at LSU, Russell was named to the All-SEC first team, completing 67.8 percent of his passes for 3,129 yards, 28 touchdowns, and eight interceptions. The Oakland Raiders took him first overall in the 2007 NFL Draft, before the selections of Calvin Johnson and Joe Thomas, who have a combined 13 All-Pro teams between them.

Russell was out of the league after three brutal seasons with Oakland. In 31 games (25 starts) he completed 52.1 percent of his passes for 18 touchdowns and 23 picks, and reportedly weighed 300 pounds at one point. In 2019, he started coaching high-school QBs. "I never thought I would want to do this, but it just came to my heart," Russell said. "There comes a time in your life when you have done so many things, and you just want to give back."

The Washington State quarterback set a conference record by throwing 34 touchdowns in his 1997 junior season to go with 3,968 yards and 11 interceptions, leading the school to their first Pac-10 championship. He finished third in Heisman voting behind winner Charles Woodson and runner-up Peyton Manning, who'd go first overall in the ensuing 1998 NFL Draft, one spot ahead of Leaf.

In 10 games (nine starts) as a rookie, Leaf threw 15 interceptions and just two touchdowns, completing only 45.3 percent of his passes. He was out of the league after three years. Leaf then struggled with addiction to painkillers, was arrested multiple times, twice in a span of four days for breaking into homes and stealing oxycodone. In 2012 he got sober and became an ambassador for a nationwide recovery clinic.

Marinovich's father Marv was the NFL's first strength and conditioning coach, and he famously began the development of his son as an NFL quarterback from the crib. "Some guys think the most important thing in life is their jobs, the stock market, whatever," Marv said, according to Esquire. "To me, it was my kids. The question I asked myself was, How well could a kid develop if you provided him with the perfect environment?"

After a redshirt year and two seasons as a starter at USC, the Raiders drafted Marinovich with the 24th overall pick of the 1991 NFL Draft. He was out of the league after just eight games across two seasons. Since then he's been arrested countless times, mostly in relation to drug addiction; he has nine arrests in Orange County alone. In March 2018, he was ordered to serve 90 in prison for violating the terms of his probation.

In 1998, the Kentucky quarterback set an SEC record by throwing for 4,275 yards, a mark that still stands as of 2018. He also still holds the record for completions per game in a season, at 36.4. After his brilliant junior campaign, the Cleveland Browns made him the first overall pick of the 1999 draft.

Following five inconsistent and injury-riddled seasons with the Browns, Couch was out of the league, having thrown 64 touchdowns and 67 interceptions. He's doing just fine now, married to former Playboy Playmate Heather Kozar and working as an analyst for weekly television show "SEC Gridiron Live."

During his three years at Nebraska, the running back from Little Rock, Arkansas, averaged 6.2 yards per carry and rushed for 30 touchdowns, winning national championships in 1994 and 1995 before being selected sixth overall by the St. Louis Rams in the 1996 NFL Draft, one spot ahead of Terry Glenn and 13 spots ahead of future Hall of Famer Marvin Harrison.

Phillips played for three teams across four years after being drafted. Following a series of arrests, he was in California's Kern Valley State Prison for felony assault with a deadly weapon in 2015 when he was charged with the murder of his cellmate. In January 2016, he committed suicide in his cell.

The Oklahoma Sooners star won the first two Butkus Awards as college football's top linebacker in 1985 and 1986; he remains the only player to earn the award more than once. He received first-team All-American honors in both years before being selected by the Seahawks in the 1987 supplemental draft.

Though he flamed out after just three seasons and one demoralizing failed tackle against Bo Jackson, "the Boz" rebounded by putting together an extensive IMDb page, including roles in "Three Kings" and the remake of "The Longest Yard." He's also worked as a real estate agent in California.

Seizing the reins as a senior starter at Oregon in 1998, the quarterback threw for 3,763 yards, 32 touchdowns, and eight interceptions, leading the Ducks to an 8-4 record. The Bengals took him with the third overall pick in 1999, behind top overall pick Tim Couch and Donovan McNabb.

In four seasons with Cincy, Smith got into 22 games (17 starts), tossing just five touchdowns to 13 interceptions while completing 46.6 percent of his passes. After stints in NFL Europe and the CFL, Smith moved back to his hometown of San Diego and opened Akili Smith Training, where he trains quarterbacks.

In his three years at Michigan State, the wide receiver set school records for career touchdown catches (27) and receiving yards in a game (270). He also caught at least one touchdown pass in 13 consecutive games, breaking a record set by Randy Moss (Larry Fitzgerald broke it a year later).

In 2003, the Lions started a streak of three seasons in which they drafted a bust at wide receiver in the first round by selecting Rogers. He broke his clavicle in each of his first two seasons, then in his third was suspended four games for his third violation of the league's substance abuse policy. In 2014, he told ESPN he was clean and studying to become a teacher. In 2017, he said he was the general manager of an auto shop in Fort Myers, Florida.

Over his two years as Tennessee's starting quarterback, Shuler broke numerous passing records (most of which would be overtaken by Peyton Manning). After completing 64.6 percent of his passes for 25 touchdowns and eight picks in 1993, Washington selected him third overall in the 2004 NFL Draft.

Shuler appeared in 29 games (22 starts) over four years in Washington, tossing an abysmal 33 interceptions to 15 touchdowns. He then returned to Washington, serving North Carolina's 11th Congressional District in the House of Representatives from 2007 to 2013. Afterward, he became a lobbyist for an energy company.

When the quarterback left Ohio State following his 1981 senior season, he did so as the school's all-time leader in total offense, throwing for 7,547 yards and rushing for another 1,303. Schlichter finished in the top six in Heisman voting three times before the Baltimore Colts selected him fourth overall in 1982.

Soon after being drafted, a gambling addiction dating back to his high school days started to catch up with him. He blew his entire $350,000 signing bonus by the midway point of his rookie year, and was suspended for the following season for gambling. He was out of the league after two more seasons, then was arrested countless times. In 2011, police arrested Schlichter for his part in a sports tickets scheme, earning him a sentence of 11 years. As of December 2017, Schlichter was in a South Carolina prison, scheduled to be released in October 2020.