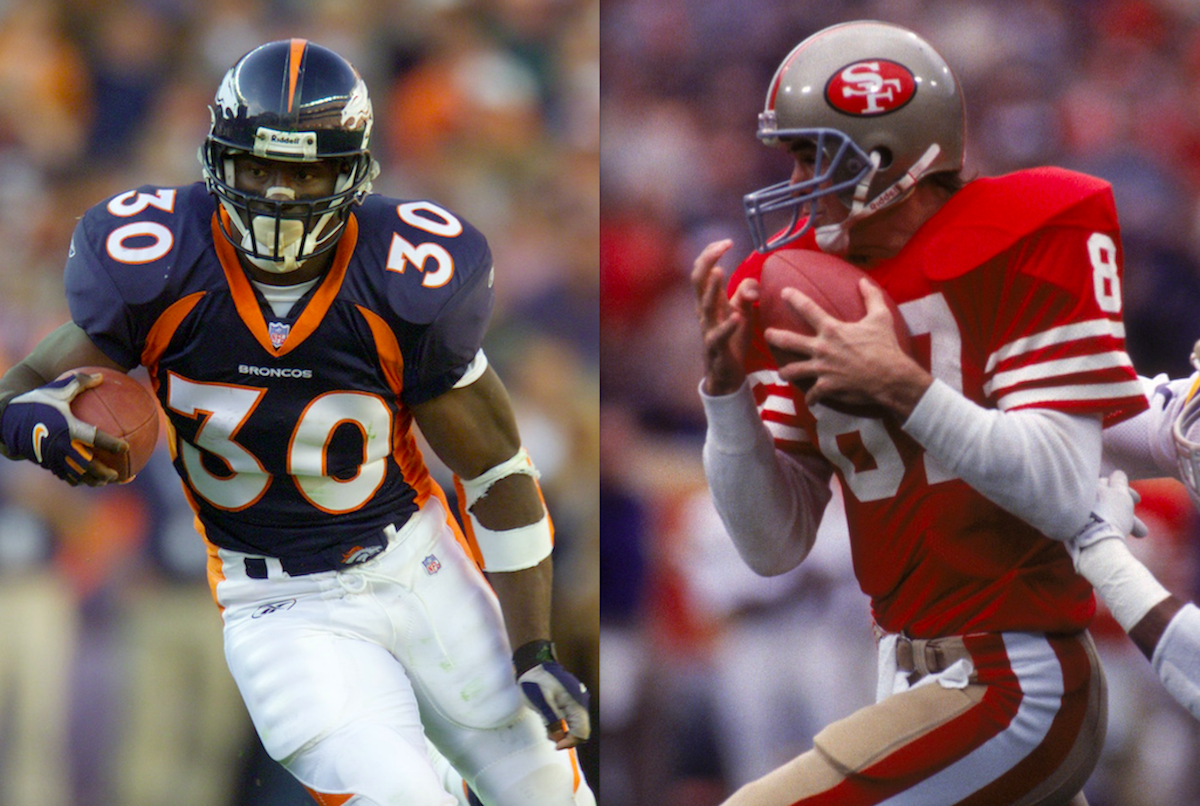 Who are the best NFL draft steals of all time?

NFL teams screw up all the time. Some more than others. That could mean blowing a high pick on a total bust. Or it could mean passing on a Hall of Famer several times over in the same draft. Let's take a look at the best late-round NFL draft steals since the NFL-AFL merger. These are the players every team had multiple chances to select. But they still had to wait forever before coming off the board. We'll set the cutoff at the 129th overall pick, which would be the first pick of the fifth round in a present-day draft without compensatory picks.

The multisport athlete played in just 38 games (23 starts) in his four-year NFL career, but he made those performances count, amassing 3,134 yards from scrimmage and 18 total touchdowns, all for the Raiders. In a playoff game in January 1991, he suffered a career-ending hip injury, but was able to play pro baseball for a few more seasons.

The Buccaneers made Harris the 169th pick of the 1997 NFL Draft, but the Texas A&M-Kingsville alum never played for Tampa Bay. Instead, the cornerback spent a season on their practice squad before being claimed by the Eagles. Harris made seven starts in his first season in Philly, then transformed himself into a two-time Pro Bowler.

The 161st overall pick of the 1971 NFL Draft was arguably the NFL's best receiver in 1973, leading the league in receptions (67) and receiving yards (1,116) across a 14-game season. That year, the Eagles wideout garnered the first of four Pro Bowl nods. He's still the Eagles' all-time leader in receptions, receiving yards, and touchdown catches.

The Harvard alum waited through 172 draftees before the Vikings selected him in the sixth round of the 1998 NFL Draft. He earned his first of six Pro Bowl nods in 2000, his first season as a starter. In 2009, he joined the Ravens, playing in Baltimore for four seasons and winning Super Bowl XLVII.

The Bills selected the stout defensive tackle with the 134th overall pick of the 2006 NFL Draft, and he's been with the team since, signing a one-year extension in March 2018. In Week 17 of the 2017 regular season, the five-time Pro Bowler carried the ball for the first time in his career, scoring a one-yard touchdown that'd turn out to be the game-winner, clinching Buffalo's first playoff berth since 1999.

After being selected 252nd overall in the 2006 NFL Draft, Colston reward the Saints by catching for over 1,000 yards in six of his first seven season, coming up short of the mark in 2008 after missing time with a broken thumb. In 10 playoff games, including one Super Bowl win, the wideout caught 58 passes for 788 yards and four touchdowns.

A picture of consistency, the wide receiver amassed over 1,000 receiving yards seven times in a span of eight seasons. The 213th pick of the 1999 NFL Draft spent his entire 14-year career with the Green Bay Packers, claiming victory over the Steelers in Super Bowl XLV at the ripe age of 36.

The 1986 draft's 233rd overall pick, Simmons went on to wreak havoc on opposing quarterbacks for 15 seasons, recording 121.5 sacks, good for 21st in NFL history. After collecting 46 sacks from 1989 to 1991, he recorded a league-leading 19 in 1992, earning his second consecutive first-team All-Pro nod. He served as defensive line coach for the Rams when Robert Quinn set a franchise record with 19 sacks in 2013, and when Aaron Donald won Defensive Rookie of the Year a season later.

The 208th pick of the 1986 NFL Draft went on to collect three consecutive All-Pro nods, from 1991 to 1993. The linebacker is one of only 15 players in NFL history to record at least 20 interceptions and 20 sacks in their career. In his 13th and final season, Joyner picked up a Super Bowl ring as a reserve for the 1998 Denver Broncos, appearing in every regular season and postseason game.

One of Joe Montana's favorite targets, the 49ers selected Clark with the 249th overall pick of the 1979 draft. On January 10, 1982, he made perhaps the most famous catch in NFL history, known as "The Catch," pulling down the game-winning touchdown against the Cowboys in the NFC championship game. It was his second score in an eight-catch, 120-yard effort. Two weeks later, the 49ers won Super Bowl XVI. Three years after that, Clark and San Francisco won it all again.

The Colts scooped the defensive end with the 138th pick of the 2003 NFL Draft, and the move would pay off in a huge way. Mathis spent his entire career with the Colts, recording an NFL record 54 forced fumbles and a franchise record 123 sacks. The tandem he formed with fellow defensive end Dwight Freeney helped lead Peyton Manning's 2006 Colts to victory in Super Bowl XLI.

The safety, selected by the Chargers with the 145th pick of the 1994 NFL Draft, went on to record 30.5 sacks in his career, a record for defensive backs. In addition to a pair of Super Bowl rings and two first-team All-Pro nods, Harrison picked up several designations as the league's dirtiest player in informal polls of players and coaches. He's one of only two players with 30 interceptions and 30 sacks in his career.

The latest pick on this entire list, Martin was selected 317th overall in the 1977 NFL Draft by the Raiders. The All-Pro linebacker responded with huge performances in a pair of Super Bowl victories. In Super Bowl XV, he intercepted Ron Jaworski three times, setting the single-game Super Bowl interception record and tying the all-time mark. In Super Bowl XVIII, he sacked Washington quarterback Joe Theismann, tackled Hall of Fame rusher John Riggins for no gain on fourth down, and recovered a fumble.

Three seasons after being selected 159th overall in the 1970 NFL Draft, the safety earned Super Bowl MVP honors, picking off Washington quarterback Billy Kilmer twice in a 14-7 victory in Super Bowl VII, the first of a pair of consecutive NFL championships for his Dolphins. The two-time first-team All-Pro intercepted five passes in 12 postseason games, and 49 in the regular season over his nine-year career.

Thanks in part to the NFL's consistently overrating height, the 5'11" linebacker out of Texas Tech wasn't selected until the fifth round of the 1996 NFL Draft, when he went at No. 154 to the Miami Dolphins. The five-time first-team All-Pro is Miami's all-time leading tackler, at 1,035 takedowns. The Dolphin with the second-most tackles, Reshad Jones, doesn't even have half that, with 515 heading into the 2018 season.

The defensive end's Hall of Fame career began when he was selected by the Bears with the 203rd overall pick of the 1983 NFL Draft. The Colonel posted 10 consecutive seasons of 8.5 sacks or more and won two Super Bowls. He was named the MVP of Chicago's Super Bowl XIX victory, forcing two fumbles, recording two sacks, and blocking a pass in a 46-10 beatdown of the Patriots.

The 196th pick of the 1995 NFL Draft spent the next four seasons dominating the league, culminating in back-to-back Super Bowl wins in 1997 and 1998. He rushed for 157 yards and set a record by rushing for three touchdowns in 1997's big game, following it up with 152 total yards a year later. After leading the NFL with 2,008 rushing yards and 23 total touchdowns in 1998, injuries slowed him down, and he never played more than eight games in a season again.

One of the greatest tight ends ever, the former seventh-rounder's Hall of Fame career included three Super Bowl wins, four first-team All-Pro nods, and eight Pro Bowl teams. When he retired in 2003, the 192nd pick of the 1990 draft had the most receptions, receiving yards, and touchdown catches for a tight end in NFL history, but he's since seen all three marks surpassed by Tony Gonzalez and Jason Witten.

Duh. Tom Brady isn't just the best late-round draft steal of all time, the 199th overall pick of the 2000 draft is the best quarterback ever. Entering the 2018 season with little sign of slowing down, the 40-year-old's five Super Bowl victories are the most for a starting signal-caller. The former sixth-round pick has led the league in touchdown passes four times and claimed three MVP awards.