Living Legend Athletes Who Kept Balling Despite Being Old AF

Zarouhi Mikaelian
Living Legend Athletes Who Kept Balling Despite Being Old AF May 16, 2018 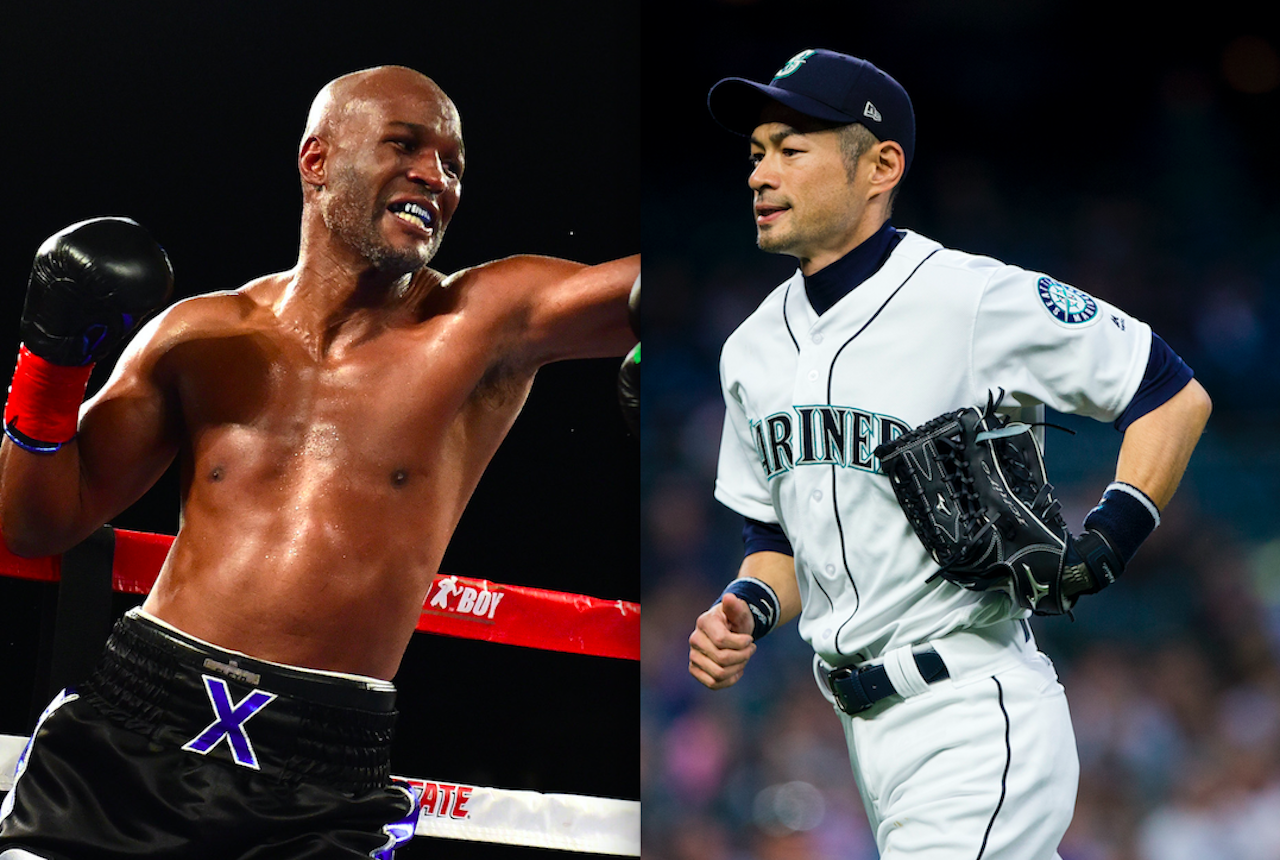 Who are the oldest athletes to ball out?

For the first time since his 1992 debut as an 18-year-old in Japan's Pacific League, Ichiro Suzuki is not playing professional baseball. Sorta. In early May, the Mariners announced the outfielder would spend the rest of the 2018 season in the front office as a special assistant to the chairman. The move entails some very Ichiro stipulations. He's still working out in the field before games and taking batting practice. Oh, and he hasn't ruled out a return to the diamond in the future. But have we seen the last of Ichiro the player or not? It's as good a time as any to recognize him and other athletes who didn't let age stop them. Here are the oldest athletes to strike fear in their opponents' hearts (in physically demanding sports; sorry, golfers).

The Hall of Famer and four-time Stanley Cup winner's NHL career started during the 1947-48 season, when he was just 18. He played for the Red Wings until 1971, then jumped to the newly formed World Hockey Association to play with his sons. At the age of 51, he returned to the NHL and was astonishingly still productive, scoring 15 goals and tallying 26 assists before retiring.

The Natural started his UFC career at the age of 24 in 1997, claiming the heavyweight title later that same year. He'd win that belt or the UFC light heavyweight title four more times before his final UFC fight, a UFC 129 loss to Lyoto Machida when he was 48. At 46, he bested Brandon Vera to become the oldest fighter to win a bout in UFC history.

In 2004, Julio Franco became the oldest regularly playing position player in the history of the majors, turning 46 during the season and batting .309 in 361 plate appearances. He then played three more seasons. He's the oldest player to hit a grand slam, hit two home runs in a game, hit a pinch-hit home run, steal two bases in a game, and pinch run.

Chelios stuck around the league until he was 48, setting records for longevity along the way — as of 2018, he's played more games than any other NHL defenseman, and his 24 playoff appearances are the most in history. The seven-time All-Star and three-time Stanley Cup champion claimed three Norris Trophies as the league's top defenseman.

After a dominant career in the Negro Leagues, Paige became the oldest player to debut in the majors, at 42 in 1948. He made two All-Star teams in his major league career, and returned to the majors for one game in 1965, pitching three shutout at the age of 59.

No one has played in more NBA games than Parish, the tall guy sorta hiding in this picture, and it'll be a while before anyone catches him (as of this writing, the corpse of Dirk Nowitzki, fifth on the all-time list, would have to play two more relatively healthy seasons to catch him). In 1997, at the age of 44, he became the oldest player to win a championship, as a reserve for the Bulls.

The Big Unit pitched for 22 seasons in the majors, winning four consecutive Cy Youngs from 1999 to 2002. Two years after that streak, Johnson became the oldest pitcher to throw a perfect game, at 40. The man with the second-most strikeouts in history pitched his last game at the age of 46.

The first overall pick of the 1987 NFL Draft stuck around for 21 seasons, long enough to climb to fourth in career interceptions and 10th in sacks sustained. He also holds the record for touchdown receivers, throwing scores to 71 different teammates. In 2007, broke his own record as the oldest starting QB to win a game, at 44 years and 19 days old.

Clemens dominated the majors for 24 seasons, winning an insane seven Cy Young awards and setting the record for strikeouts in a game, with 20, a mark he and two other pitchers have matched since. He led the NL with an ERA of 1.87 in 2005, when he turned 43, then pitched two more seasons.

The 44-year-old says he won't be playing for the rest of the 2018 season, but that doesn't mean he won't be taking batting practice before games — and he still hasn't ruled out playing in 2019. The 2001 AL MVP and Rookie of the Year led the majors in hits seven times.

Hough managed to stick in the majors for 25 years thanks in no small part to a knuckleball that the righty threw roughly 80 percent of the time. The one-time All-Star pitched his final season in 1994 at the age of 46, when he won five games for the Florida Marlins.

The grandaddy of all knuckleballers, Niekro's dancing pitch kept him in the majors through age 48. The Hall of Famer won 318 games and is fourth all-time in innings pitched, topping 300 innings in a season an incredible four times. At 46, he became the oldest pitcher to throw a shutout, which would be broken 25 years later by someone else on this list.

While he didn't have the Hall of Fame career of his older brother Phil, Joe was a filthy knuckleballer himself, earning an All-Star nod and finishing second in Cy Young voting in 1979. Unlike his brother, Joe claimed a World Series title, doing so after a trade to the Twins in 1987. His next season, at age 43, was his last.

In 1994, 20 years after he lost his heavyweight throne the first time, to Muhammad Ali, Foreman (right) became the oldest champ in history by knocking out Michael Moorer (left). He then defended the belt three times before a defeat at the hands of Shannon Briggs at age 48 sent him into retirement.

In 2011, Hopkins defeated fellow light heavyweight Jean Pascal to become the oldest person to win a world championship, at 46, breaking Foreman's record (Foreman is still the oldest to win a heavyweight title). He then broke his own record two more times, at 48 and 49. The former undisputed middleweight champion last fought in 2016, at 51.

Jagr played 22 games with the Flames this season at age 45 before returning to his native Czech Republic, where he plays for HC Kladno. In January 2015, he became the oldest NHL player in history to record a hat trick. He won the Ross Trophy five times, the Lindsay Award three times, and the Hart Trophy once.

One of the greatest baseball players of all time and the quintessential leadoff man, Henderson is baseball's all-time leader in runs and steals. In 1998, he stole 66 bags to become the oldest player to lead baseball in steals, at 39. At 43, he became the oldest player to man centerfield. He last played in the majors at 44 in 2003, but wouldn't officially retire until 2007.

The man who broke Phil Niekro's record as the oldest to pitch a shutout, Moyer spun his gem at the ripe age of 47. His stuff wasn't spectacular, but his longevity was, pitching in the majors at age 49. He owns the records for home runs surrendered, and is the oldest player to record an RBI.

Baseball's all-time leader in strikeouts and walks, Ryan led his league in Ks 11 times, including in the seasons in which he turned 41, 42, 43, and 44. Then the flamethrower pitched three more seasons before hanging hit cleats up at 47. His 6.6 hits per nine innings is the lowest career mark among qualified pitchers.

Big Bart is still doing his thing in the majors in 2018, and he'll turn 45 on May 24. Now with the Rangers, his 11th team, Colon is barreling toward a milestone — the righty is currently sitting on 241 career victories, two shy of tying Juan Marichal for the most by a Dominican pitcher.

The Dominator dominated the league until he was 43, playing in half the Red Wings' regular season games that season en route to the 2007-08 Stanley Cup title, the second of his career. He then spent a season in the Czech league in 2009-10, and another in Russia in 2010-11, when he turned 46. He presently has the NHL's highest save percentage of all time (.9223), just barely ahead of the still-active Tuukka Rask (.9221).