The 20 Greatest Sets Of Sports Siblings Of All Time

Zarouhi Mikaelian
The 20 Greatest Sets Of Sports Siblings Of All Time April 6, 2018 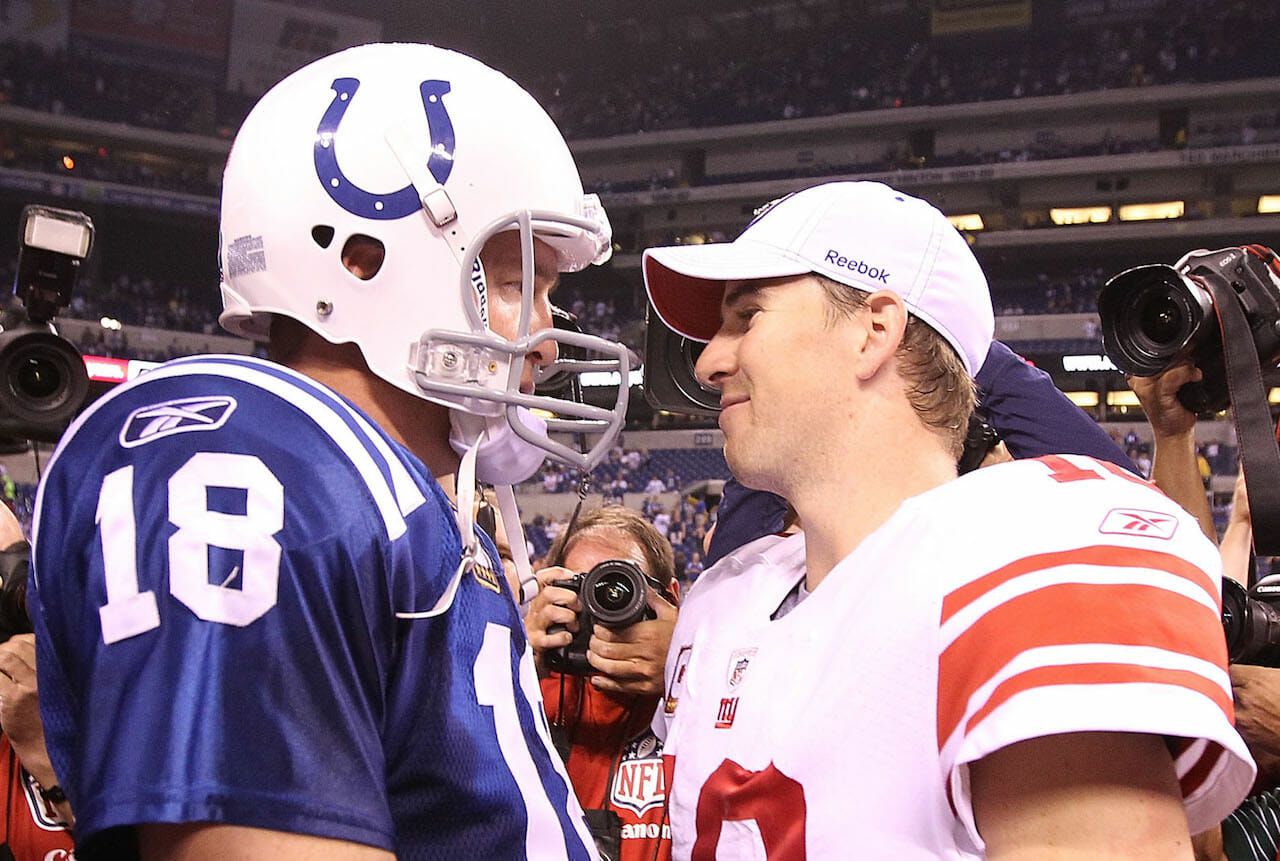 Ever get so frustrated with a sibling that you want to launch your shoulder at his or her chest with full force? Well for some of these famous sports siblings, that'd not only be acceptable, it'd be encouraged, depending on the sport at least. And frustratingly, the two brothers on this list that everyone wanted to see beat the crap out of each other, sliding in at No. 8, instead spent their careers refusing to fight. Here's our ranking of the 20 greatest sets of sports siblings ever.

While Yadier Molina is easily the biggest star — with six Gold Gloves, eight All-Star nods, and two World Series rings — all three major league catchers have found success at the sport's highest level: Bengie collected two Gold Gloves and won a World Series in 2002 as a member of the Angels with Jose serving as his backup, and Jose got a second ring with the Yankees in 2009.

[dx_custom_adunit desktop_id="RTK_K67O" mobile_id="RTK_5yk0"] The Canucks landed the twins with the second (Daniel) and third (Henrick) overall picks of the 1999 NHL Draft. While their lone trip to the Stanley Cup Finals was fruitless, in their careers the linemates combined to win a Hart Trophy, a Ross Trophy, and a Lindsay Trophy, and claimed gold for Sweden at the 2006 Olympics. The pair announced the 2017-18 would be their last.

Another set of twins, the Barbers didn't even play on the same side of the ball. As a running back, Tiki led the NFL in yards from scrimmage twice, overtaking the 2,000-yard mark three consecutive times before an abrupt retirement in 2006. His brother made three All-Pro teams as a defensive back and won the Super Bowl following the 2002 season.

Another set of football brothers on opposite sides of the ball — Bruce was named to seven All-Pro teams as an offensive lineman, playing 19 seasons. His older brother Clay also played forever, logging 278 games at linebacker, and spawned a son who appears bound to join his uncle in the Hall of Fame.

[dx_custom_adunit desktop_id="RTK_K67O" mobile_id="RTK_5yk0"] Leon Spinks beat Muhammad Ali in 1978 for the linear heavyweight boxing title before losing it back to the legend in a rematch. Then in 1985, Michael reclaimed the belt for the family by besting Larry Holmes in his first heayweight fight after a long reign as the light heavyweight champion.

Pedro Martinez's Hall of Fame career is highlighted by three Cy Young awards in a four-year span and a World Series ring with the 2004 Red Sox. But big brother Ramon was no slouch either, winning 20 games with an All-Star nod in 1990, finishing second in Cy Young voting.

The undisputed kings of men's doubles tennis. As of this writing in April 2018, they've jointly held the No. 1 ranking in men's doubles since October 2015, a record. Thus far they've claimed 16 Grand Slam titles and one Olympic gold medal, and they set a record by competing in seven consecutive Grand Slam finals from 2005 to 2006.

[dx_custom_adunit desktop_id="RTK_K67O" mobile_id="RTK_5yk0"] Reggie's not bad, earning five NBA All-Star nods and entry into the Hall of Fame. But sister Reggie is arguably the greatest of all time on the women's side. She led USC to consectuve NCAA titles in 1983 and 1984, claimed Olympic gold in 1984, once dropped 105 points in a high school game, and was enshrined in the Hall of Fame in 1995.

Between them, the Curry brothers have two NBA MVP awards, four All-NBA nods, and a scoring title. Sure, all that belongs to Steph, but Seth's a solid player in his own right — he averaged a career-high 12.8 points in 2016-17, and is presently sporting a career mark of 43.2 percent from three-point range.

According to the Daily Mail, Steve, the elder of the cricket-playing twins, "led Australia to 15 of their record 16 consecutive Test wins, established the cult of the ‘Baggy Green’ (idolising the national team’s cap) and became the Pommie-basher extraordinaire." I don't know what any of that means, but it sure sounds impressive. His brother was apparently "one of the most stylish and successful opening batsmen of all time."

[dx_custom_adunit desktop_id="RTK_K67O" mobile_id="RTK_5yk0"] At the 2012 Olympics, Alistair claimed gold in the triathlon while his younger brother Jonny took third. Four years later in Rio, they became the first brothers to take gold and silver in the same Olympic event since 1960, when Alistair defended his gold and Jonny upgraded on his bronze performance.

These brothers were traded for each other in 2008, a deal that sent Pau to the Lakers, where he'd help Kobe Bryant win a pair of championships. They have a total of nine NBA All-Star nods between the two of them. Pau claimed the Rookie of the Year award in 2002, and Marc took the Defensive Player of the Year award in 2013.

These Ukrainian brothers dominated the heavyweight boxing ranks from 2006 to 2015 so hard it's known as the "Klitschko Era." The massive brothers at one point held held all of boxing's heavyweight titles concurrently, but they refused to square off against each other. Vitali is the only world heavyweight champ in history never to get knocked down in a fight.

[dx_custom_adunit desktop_id="RTK_K67O" mobile_id="RTK_5yk0"] Sure, Joe is one of the greatest to ever do it, but his brothers weren't bad, either. Vince, the eldest, earned a pair of All-Star nods with the Pittsburgh Pirates, and Dom, the youngest, earned seven such nods and led the American League in triples, steals, and runs with the Red Sox in 1950.

What better way to become a Hockey Hall of Famer than to have a brother to practice against — Phil was a center, winning two Hart Trophies, five Ross Trophies, and two Stanley Cups. Tony, a goalie, claimed three Vezina Trophies and the 1969-70 Calder Trophy.

The Charltons became the second set of brothers to win a World Cup as teammates, leading England to their first and, so far, only World Cup title in 1966. Bobby is considered by many to be the greatest player in the nation's history. He still leads the national team and Manchester United in all-time scoring. Jack, a defensive back, was a fixture for Leeds United for two decades.

[dx_custom_adunit desktop_id="RTK_K67O" mobile_id="RTK_5yk0"] Both Hall of Fame brothers spent their entire careers with the Canadiens. Maurice, a right wing, led the NHL in scoring five times and claimed eight Stanley Cup victories. Henri, a center, twice led the league in assists and helped the team to 11 Stanley Cup titles.

While Peyton has a leg up in accolades, Eli had the edge in Super Bowl victories until Peyton's miraculous run to the 2015 title tied it at two rings apiece for the quarterback spawns of fellow Pro Bowler Archie Manning. Eli's still at it, so he's got a chance to overtake Peyton again.

Long before Jackie Robinson broke baseball's color barrier and won NL Rookie of the Year, a batting title, and NL MVP in the span of three years, his older brother Mack competed in the 200-meter sprint at the 1936 Olympics, taking silver just 0.4 seconds behind winner Jesse Owens.