These Sports Superstars Had It All, But Then They Lost It All

Greg Smith
These Sports Superstars Had It All, But Then They Lost It All December 6, 2018 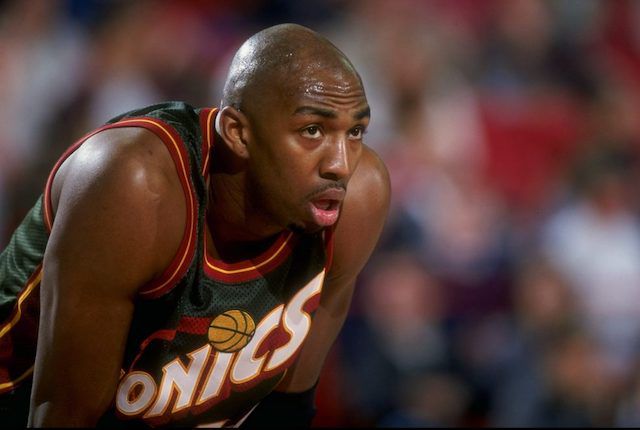 After a six year NFL career playing primarly for the Tennessee Titans, Young retired in 2014, and fell into a world of financial hardships. After spending nearly all of his money accured in the league, at least $34 million a year, he filed for Chapter 11 bankruptcy that year. He also defaulted on a loan he insisted was instilled under shady circumstances.

Baker, a four-time All-Star, played for multiple teams during his NBA career. After he retired, he lost nearly $100 million in a series of financial troubles abetted by his alcoholism. In 2015, he took a job managing a Starbucks in Rhode Island. He credited this decision, alongside newfound sobriety, to cleaning his act up. He's now the assistant coach to the Milwaukee Bucks.

William "The Refrigerator" Perry, nicknamed for his intimidating size, played in the NFL for ten years. Sadly, after retiring, Perry had many health issues including alcoholism, diabetes, and Guillain–Barré syndrome, a nerve disorder. These factors, combined with a series of poor planning decisions, resulted in a loss of most of Perry's earnings. He currently lives off of social security earnings, and even sold his Super Bowl ring to get by.

Hall-of-famer Terrell Owens, who played as a wide receiver for 16 seasons, garnered lots of controversy for his flamboyant on-and-off-field behaviors. His touchdown dances routinely resulted in fines, and he lived a life of luxury. All of this meant that Owens' career-long earnings of $80 million were completely gone by the time he retired.

She was, unquestionably, the WNBA's biggest superstar. She won four consecutive championships with the Houston Comets, she won an Olympic gold medal, and she even had a shoe line named after her. But throughout her career, Swoopes made a series of poor financial investments, spending freely along the way. By the time her career ended, she had to part with many beloved mementoes, just because she couldn't afford the storage unit rent.

Best known as Michael Jordan's right-hand man, Scottie Pippen was an integral part of the Chicago Bulls' unstoppable 1990s. During this time, he spent nearly all of his $120 million on extravagent purchases. He even bought a private jet for $4 million, only to spend $1 million more when the jet didn't work. Pippen even invested $20 with a fraudulent adviser, who was sentenced to prison in 2016.

He's one of boxing's biggest stars. Known for his talent, his vicious ear-biting episode, and his post-boxing media appearances. Among all these things, Mike Tyson has also been flat broke. He filed for bankruptcy in 2003, after losing nearly all of his $300 million in earnings to cocaine addiction and poor spending decisions. Thanks to rehab and better financial planning, he's found himself back on his feet.

Lenny Dykstra was a controversially electric player in the MLB for 12 years, known for running into walls onfield and living the high life off the field. Later in his life, he lost nearly all of his $58 million earnings and got into serious legal troubles. He's been arrested and sentenced for charges ranging from fraud, money laundering, obstruction of justice, and even making terrorist threats toward an Uber driver.

Latrell Sprewell was, objectively, an incredible basketball player, making the All-Stars four times. But he was also an unstable man. He choked his New York Knicks coach during practice. He refused a $21 million contract from the Minnesota Timberwolves, stating it wouldn't be enough to feed his family. And both his mansion and yacht were repossessed after he defaulted on payments.

Kenny Anderson, an All-Star point guard in the NBA, has been forthcoming with his personal demons. He lost a post-career job coaching a private school's basketball team because of a DUI. He was placed on a Dennis Rodman-headed team to play in honor of dictator King Jong-Un's birthday. And he filed for bankruptcy in 2005 after making $63 million. In 2017, he made a documentary about all of this and more called Mr. Chibbs.

Johnny Unitas was one of the NFL's first bonafide superstars. He was a popular quarterback with the Baltimore Colts in the 1950s and 60s. What did he do after retirement? After a series of unsuccessful business deals, including a failed bowling alley, he filed for bankruptcy in 1991. Later, he founded a succesful merchandising company. But after his death in 2002, the company went bankrupt two years later.

2011 was a dramatic year for defensive hockey player Jack Johnson. He signed a $30.5 million contract to play for the Columbus Blue Jackets. And, he filed for bankruptcy. Johnson's issues began when he handed power of attorney to his mother, Tina, who defaulted on at least 18 loans while simultaneously treating themselves to extravagances.

Jack Clark was a baseball wunderkind. He joined the MLB at age 19 and was an All-Star by 22. He earned the nickname The Ripper. And then, after retiring, he filed for bankruptcy twice. Once in 1992, after a failed drag racing company coupled with his personal penchant for expensive cars. And then again in 2018, after racking up half a million dollars in debt.

His nickname was literally money. And he lost a lot of it. Floyd Mayweather Jr., the controversial boxer, earned money that would set most folks for life just for showing up to fights. But he couldn't hang on to it for long, regularly buying cars, jets, and jewelry -- $7 million of which robbers stole from him in 2008. After a nearly two year retirement, Mayweather Jr. returned to the ring -- primarily in order to refill his empty wallet.

He's not just the man whom Mike Tyson bit. Evander Holyfield was a boxing icon in his own right -- he's the sport's only athlete to win the heavyweight championship four times. But by the time he retired, he lost all of his $230 million earnings, primarily to child support costs of his 11 different children to six different women.

While playing soccer for Manchester United, Eric Djemba-Djemba earned around $96,000 per month. Then, in 2007, he was traded to another team and immediately declared bankruptcy. "Eric is on a different planet," said former agent Christophe Mongai. "He simply has no notion of money." At one point, Djemba-Djemba had 30 separate bank accounts.

Dorothy Hamill won the Olympic gold medal for figureskating in 1976. Later, she won the World Championship and even bought the Ice Capades touring show she once skated in. Later still, in 1996, she filed for bankruptcy, being $1.6 million in debt. While some faulted Hamill herself for poor spending habits, Hamill maintained her estranged husband was to blame.

An eccentric figure during his NBA career, Dennis Rodman continues to puzzle us with decisions like cozying up to North Korea. He also made a series of puzzling financial decisions leading to his inability to pay child support for two of his children. His lawyer's defense was damning -- Rodman couldn't pay these debts because he was already in too much debt.

Debi Thomas is a history-maker. She's the first African-American figure skater to win a medal at the Winter Games, in 1988. Thirty years later, she sold her medal and moved to a trailer park, all in an effort to try and stay financially stable. Her life post-Olympics was marred by bankruptcies, mental disorders, and the loss of her second career as an orthopedic surgeon.

As a pitcher, Curt Schilling amassed a jealousy-inducing career. He's won World Series Championships, MVP awards, and was a six-time All Star. Off the mound, it's a different story. The combative, outspoken conservative wound up founding a video game company, accepting a $75 million loan. They defaulted, and Schilling, who put the majority of his personal fortune in the company, lost everything.

After a successful career in both tennis and poker, Boris Becker was declared bankrupt in 2017 by a British court, after Becker defaulted on a loan. The following year, Becker and his lawyers claimed that the declaration was fraudulent, as Becker had diplomatic immunity at the time. Becker says he was the Central African Republic's Attache for Sports/Humanitarian/Cultural Affairs in the European Union. The prosecution insists such a position does not exist.

As a quarterback, Bernie Kosar won a Super Bowl championship. After his career, however, he declared bankruptcy in 2009. He filed for Chapter 11, stating that he was nearly $20 million in debt. However, the court ordered it changed to a Chapter 7 filing, which might put Kosar's NFL pension in jeopardy. Later, in 2010, Kosar lost more property due to unpaid back taxes.

Arantxa Sanchez Vicario had a storied tennis career, winning a total of 14 Grand Slam titles and an ITF World Championship. Unfortunately, in 2012, it was revealed that she lost nearly all of her $60 million in earnings, and owed the Spanish government. Sanches Vicario blames the poor decisions of her estranged parents.

At age 19, Antoine Walker was drafted from the highly successfull college Kentucky Wildcats to the highly successfull Boston Celtics. He quickly became the team's highest scorer, a three-time All-Star, and won the NBA championship. Then, in 2010, he lost nearly all of his $108 million earnings. Now, Walker works with Morgan Stanley to educate other young athletes about the same financial mistakes he made.

He was one of the NBA's most highly regarded players. He was influential too, infusing the league with a dose of personal expression in fashion, demeanor, and politics. But after retiring, Allen Iverson reportedly spent nearly all of his $200 million earnings. However, Iverson maintains this is an untrue rumor.