The Real Adventures And Misadventures Of The Stanley Cup Trophy

Zarouhi Mikaelian
The Real Adventures And Misadventures Of The Stanley Cup Trophy July 12, 2018 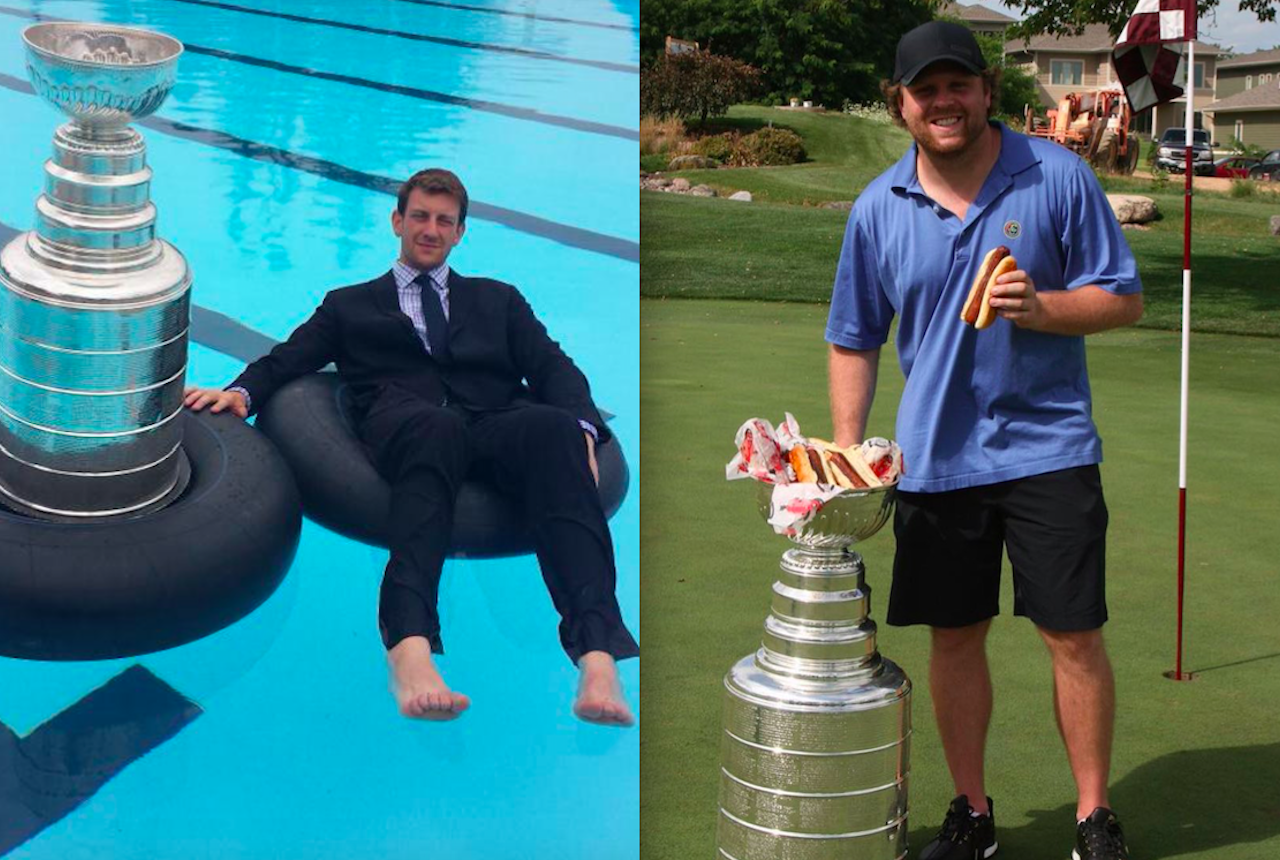 Lord Stanley of Preston, then the governor general of Canada, donated what'd become known as the Stanley Cup as an amateur ice hockey award all the way back in 1892. It's tradition for NHL champions to eat and drink out of the oldest existing trophy a professional sports franchise can win. But the Cup has many more uses than just that. Including a number of things that'd make consuming food or beverage from the Cup an act of bravery. It's been a prop in the act of an exotic dancer. And a baptismal font. And, yes, a toilet. So the Stanley Cup trophy has done and seen more than Forrest Gump. Check out some of the most memorable Stanley Cup adventures (and misadventures).

In a war zone

"We went to Afghanistan this past March and had a missile attack our first night," said Mike Bolt, former keeper of the Cup, of the trophy's 2007 trip to Kandahar, Afghanistan, its first into an active war zone. "We first arrived in Kandahar in flak jackets, the whole thing. Later on, I get back to the barracks and hear an air-raid siren, but I was dying for a shower, so I figured I'd just sit tight. I got into my room and—true story—sat down on the Cup case and read Maxim. I swear. I go into the shower, and when I get out a bunch of the guys are around going, 'Mike, where were you during the missile attack?' I told them, 'Sitting on the Cup case reading Maxim." And they said, "Holy crap, you're dedicated to your job!' Truth be told, if I had known better, I would have ditched the Cup and been like George Costanza pushing women and children out of the way."

Of its many notable talk show visits, none is more infamous than the Cup's episode on "The Howard Stern Show," appearing with Claude Lemieux after his Devils won it all in 1995. Jackie the Jokeman allegedly used the trophy as a toilet, though former Cup keeper Mike Bolt disputed that to Maxim in 2008: "No. I've heard two things: They put chocolate pudding or a chocolate bar in it. Personally, I don't know why someone would think that was funny; people drink and eat out of this thing. I would not have allowed it if I were around in '95 when it happened."

Countless players have admitted to taking the Cup to bed, among them Bryan Trottier. "I wanted to wake up and find it right beside me," he said of his cold and metallic bedfellow. "I didn't want to just dream of this happening." The Islanders legend should be as familiar with the trophy as anyone; he won it six times.

Lifelong Red Wings center Steve Yzerman didn't claim the Cup until his 14th season, which might explain why he was so elated following his victory in the 1997 Stanley Cup Final that he couldn't sleep that night. He did manage to make it into the shower with the trophy, however.

The 1940 Rangers bested the Maple Leafs in six games to claim the Cup. After mistreating the trophy, they wouldn't win it again for more than half a century. "I always say, you want to keep winning this, you respect it, because in 1940 the Rangers burned the deed [to the old Madison Square Garden] in the Cup and then urinated on it to put out the fire—and it was 54 years before they won it again," Cup keeper Mike Bolt told Maxim in 2008. "But 99 percent of the guys, if not 100, are very respectful around it."

Mark Messier won the Cup five times, and took it to at least two strip clubs. After winning it all with Edmonton in 1987, he took it to the Forum Inn, a strip joint near the Northlands Coliseum, where it was incorporated into a dancer's performance. Seven years later, after winning with the Rangers, Messier took it to Scores in Manhattan.

Go For Gin for the win

After the Rangers' Stanley Cup victory in 1994, massive horse racing fan Eddie Olczyk took the trophy to Belmont Park to meet that year's Kentucky Derby winner, Go For Gin. But he said he never fed a horse out of it. "That's not true," Olczyk said, despite having posed for this photo. "I took the Cup to the Meadowlands one night and to Belmont Park the next day. I saw Go For Gin in the winner's circle, but no horse ate out of the Cup while it was with me."

Even back in 1905, hockey players knew how to have a good time. That year, the dominant Ottawa Silver Seven got so lit after claiming the Cup that star Harvey Pulford punted the trophy from a bridge into the Rideau Canal, which was frozen. Player-coach Alf Smith woke up the next morning, remembered what'd happened, and found the Cup in the same spot.

Whether or not someone on "The Howard Stern Show" defecated in the Cup, at least one person has: the daughter of former Red Wings center Kris Draper. In 1998, following his second of four titles with Detroit, Draper's daughter accidentally made a mess of the trophy. Don't worry, he cleaned it ... then proceeded to drink out of it later that day.

Josh Archibald became a Stanley Cup champion and a father just months apart in 2017, then celebrated that fact by having son Brecken Archibald baptized from the Cup in Minnesota. In 1996, Avalanche defenseman Sylvain Lefebvre did the same with his daughter. Twelve years after that, Tomas Holmstrom let his cousin baptize his daughter from the Cup in Sweden.

Not a floatation device

Several players have attempted to swim with the Cup, finding out on their own that it's more difficult than it sounds. "It doesn't float," Phil Bourque said in 2008, 17 years after he won the Cup with the Penguins and took it into Mario Lemieux's pool. "We put it in Mario's pool and it sinks in a matter of 10 seconds. We didn't want to hurt it because you got to respect the Cup, but you want have some fun with it too." Patrick Roy learned the same thing in 1993.

In 2014, Jeff Schultz solved the dilemma the 1991 Penguins and 1993 Candiens couldn't, giving the Stanley Cup its own inner tube. "Jeff Shultz floating in [style] with the #stanleycup," Cup keeper Philip Pritchard tweeted with this picture after the Kings bested the Rangers in five games for the title.

Ten days before Jeff Schultz took Lord Stanley's chalice into the pool, his teammate Jarret Stoll took it to Saskatoon for his annual celebrity golf tournament benefitting the Jarret Stoll Patient Comfort Fund Endowment for Children at Royal University Hospital. There, Stoll used the Cup as a subtle ball marker.

Fourteen years before Eddie Olczyk fed a Kentucky Derby winner from the Cup, Islanders legend Clark Gillies let his best friend get in on the celebration, filling it with dog food for his four-legged pal to eat. The act has since been repeated by Sean O'Donnell and Jean-Sebastien Giguere, both in 2007.

After the Leafs traded Phil Kessel to the Penguins in 2015, the Toronto Sun's Steve Simmons wrote, "The hot dog vendor who parks daily at Front and John Sts. just lost his most reliable customer," in a story about the forward's allegedly wearing out his welcome. Two years later, Kessel posed for this photo after winning it all with the Penguins.