The Story of an MLB Pitcher Who Literally Forgot How to Pitch, Then Returned to the Majors at a New Position

Zarouhi Mikaelian
The Story of an MLB Pitcher Who Literally Forgot How to Pitch, Then Returned to the Majors at a New Position July 31, 2018 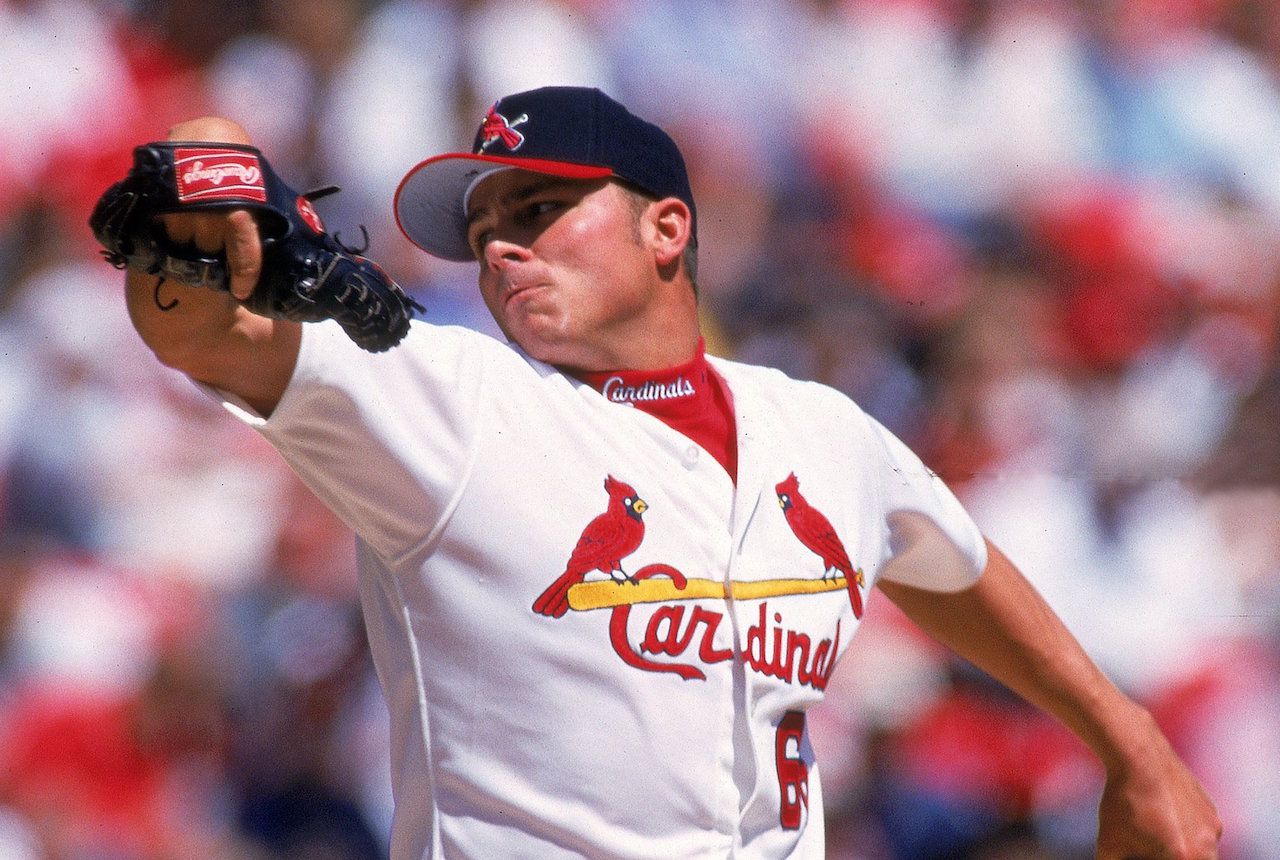 In 1999, Rick Ankiel was baseball's pitching prospect with the most hype. A season later, the 20-year-old lefty with a lethal curveball helped lead the Cardinals to the playoffs. But in the postseason, his stardom-bound career took a bizarre, disastrous turn. Over the next seven years, he worked his way back to the majors, changing positions along the way.

Rick Ankiel overcame a rough upbringing to become a one of the most hyped pitching prospects of the '90s. "I grew up in Fort Pierce, Florida," Ankiel told WBUR in 2017. "Family life at times was good and at times was bad. My father was an alcoholic and two-bit criminal, abused drugs. And there were times where he would disappear for a few days. You know, he’d start drinking and then he was gone. But when he would come home and you heard the car door slam, you knew it was time to make sure you stayed out of the way. And, you know, it makes it hard."

He was practically untouchable on the mound in his youth. "I remember going to a tournament in high school where it's the best talent in high school, and you start looking and saying, hey, I'm one of the best here," he told NPR in 2017. "And then I played on the USA junior team and realizing that, you know, that I was better than some of the guys that were older than me that were going to be drafted that year, and I wasn't going to be drafted until the following year."

Ankiel dominated in his senior year of high school, riding a 94 mph fastball to an ERA of 0.47 and 162 strikeouts in just 74 innings. "Oh, it’s the best feeling in the world," Ankiel said. "I mean, you’re out there and you control the entire game. You know, in those moments, you feel like it's your destiny and you were meant to be there and put on this earth for that reason."

The Cardinals selected Ankiel in the second round of the 1997 MLB Draft and inked him to a $2.5 million signing bonus, then the fifth-highest ever for an amateur player. Because of his immense high school success, Ankiel entered the minors as a top prospect; Baseball America ranked him No. 18 on their annual preseason list of prospects.

He didn't disappoint in his first season as a pro. Ankiel pitched to a 2.63 ERA in 28 starts in 1998, starting the season with the Single-A Peoria Chiefs before a promotion to the Prince William Cannons of Advanced A ball. The lefty, who turned 19 partway through the season, led the minors with 222 strikeouts.

A year later, Ankiel demolished Double-A, owning an 0.91 ERA through eight starts for the Arkansas Travelers. He struck out 75 batters in 49.1 innings before a promotion to the Memphis Redbirds of Triple-A, where he maintained his absurd strikeout rate and posted a 3.16 ERA despite being almost eight years younger than the average player at the level.

With the Cardinals struggling, the big club promoted their prized youngster, who opened the year at No. 2 in Baseball America's prospect rankings. He made five starts and four relief appearances in 1999, posting an ERA of 3.27 and amassing 39 strikeouts in 33 frames.

Ankiel's heater sat in the mid-90s, and he deployed a notably heavy sinker, but his curveball was by fair his best offering — Cardinals legend Mark McGwire nicknamed it the "snapdragon," and longtime St. Louis pitching coach Dave Duncan described it as "a Hall of Fame pitch."

Ankiel experienced just one full season as an MLB pitcher, in 2000. Despite turning 21 on July 19, he was one of the National League's better pitchers, going 11-7 with a 3.50 ERA. He struck out 194 batters in 175 innings over 30 starts. He finished second in Rookie of the Year voting to Braves shortstop Rafael Furcal. Then came the postseason.

On October 3, 2000, Ankiel's career went sideways. He started Game 1 of the Cardinals' National League Division Series against the Braves. The lefty worked around two hits and two walks in the first two innings as his offense staked him to a 6-0 lead against Atlanta ace Greg Maddux.

But Ankiel walked Maddux to open the third, then allowed him to reach third base on a pair of wild pitches. He left the game two outs later, having surrendered four walks and four runs with five wild pitches. Fortunately, the Cardinals escaped with a win. They went on to sweep the series.

Ankiel became the first player to throw five wild pitches in an inning since Bert Cunningham did the same in the Players' League in 1890. "At least I set a record," the 21-year-old joked. "I was kinda trying to do too much, instead of relaxing. I was a little anxious. It was just one of those days."

But the problem stuck with him. Ankiel opened his next start, in Game 2 of the Cards' National League Championship Series against the Mets, by sailing his first pitch over the head of Timo Perez. He threw 20 pitches in the opening frame; five of them found the backstop.

Manager Tony La Russa pulled his starter before the end of the first; he surrendered two runs and recorded just two outs. Ankiel's next appearance came in relief in Game 5 — he again struggled with control as the Mets closed out the series with a 7-0 victory.

He'd succumbed to the same inexplicable mental block that previously haunted Steve Blass in the '70s, and that would infamously also hamper Yankees second baseman Chuck Knoblauch. "'The Thing,' 'The Yips,' 'The Monster,' whatever you want to name it," Ankiel said in 2017. "You lose your ability to do something that you've done your whole life without the explanation of why."

Ankiel still couldn't find the plate early in the 2001 season, posting a 7.13 ERA through six starts before a demotion to Triple-A. Things got even worse in Memphis: He walked 17 batters in just 4.1 innings. The Cardinals then sent him and his 20.77 ERA down to rookie ball, a level so low he'd skipped it during his first ascension through the minors.

"When I'm going through it I didn't have the answer either," he told the St. Louis Post-Dispatch in 2017. "You see guys who have an elbow injury and they can go talk to somebody else who’s had an elbow injury. … When you go through the yips, first of all, nobody wants to talk about it. Nobody can tell you how to fix it. And then there's really nobody who, technically, we’ll say (has) beaten it, and if they have they don’t want to talk about it. There is no endgame in sight. The hardest part is just being alone."

But Ankiel missed the entire 2002 season with a sprained shoulder. After a rough 10 starts to open the 2003 campaign, he underwent Tommy John surgery. He returned to form in 2004, walking just two batters in 23.2 innings across three levels of minor league ball.

The team called Ankiel up at the end of the 2004 season. He made five relief appearances, surrendering just one walk in 10 innings, an encouraging sign despite an ERA of 5.40. But just months later, Ankiel left pitching altogether following a brutal outing in spring training.

On March 9, 2005, Ankiel entered La Russa's spring training office and retired as a pitcher. He was supposed to start in a game later that day. "I left that morning with no clue what I was going to do with the rest of my life," he told the St. Louis Post-Dispatch. In his previous outing, he'd thrown 20 pitches — only three for strikes.

"What it took me to throw strikes, mentally, from the time I woke up to the time I went to sleep — the mental exercises, everything that came with me trying to be successful," Ankiel added. "I just tried to look into the future another five years, six, seven years. Whatever was going to come of this isn't going to be worth it. My personality was changing. My relationships with friends and my family were changing. And I knew something had to change."

But instead of leaving the game for good, Ankiel tried his hand as a position player. The 25-year-old immediately proved to be a serious prospect as an outfielder. He played in 85 games across Single-A and Double-A ball in 2005, launching 21 homers, collecting 75 RBI, and hitting .259/.339/.514. He also impressed defensively thanks to his top-tier athleticism and strong arm.

In 2006, the Cardinals invited Ankiel to spring training with a chance at making the big league roster. But on February 26, he sustained an injury to his left knee that required surgery. The pitcher who became an outfielder missed the entire season, but his return to the majors wasn't far off.

Ankiel opened the 2007 season with the Triple-A Memphis Redbirds. He was one of the level's best outfielders, hitting .267/.314/.568 with 32 homers, most in the Pacific Coast League, and driving in 89 runs, tied for second, through 102 games. He started in the Triple-A All-Star Game and got a call-up on August 9.

He started in right field for the Cardinals that night, hitting in the No. 2 spot against the Padres. In the seventh inning, the outfielder launched a three-run home run. "I pitched the report," said Doug Brocail (pictured), Ankiel's victim in a 5-0 Cardinals win. "I have no idea how he hit that ball. It's good to see the kid back, though."

The former top pitching prospect was back at a new position, and for good. While not the star he was as a pitcher, Ankiel had a productive career as a power-hitting fourth outfielder with a plus glove. Starting with his 2007 call-up, he played in 598 games, homering 74 times and driving in 242 runs while hitting .242/.304/.427.

Ankiel earned over $12 million in MLB salary over his career. In 2015, the Nationals hired him as a life skills coordinator, a position that involved mentoring players up and down the organization. He's served as an analyst on Cardinals pregame and postgame shows for Fox Sports Midwest since 2016.

"I just felt like nobody in the world was giving me a chance, and that helped fuel me, too. ... I was excited to go back to the park and excited to be there, where the four years before that, it was a grind," Ankiel told NPR in 2017 of his conversion to the outfield. "And I wasn't excited to go to the field. And baseball became fun again. And that challenge of making it back became, you know, just this excited to be there, and it was awesome. I made it back. And, you know, now here I am."