Here Are The Worst And Most Completely Embarrassing NFL Teams Ever

Zarouhi Mikaelian
Here Are The Worst And Most Completely Embarrassing NFL Teams Ever April 23, 2018 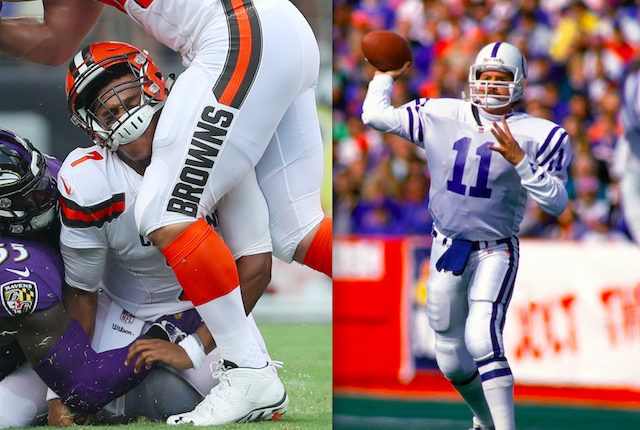 What are the worst NFL teams of all time?

Does terrible football angers you as much as losing winnable games angered late former Cardinals head coach Dennis Green? Then avert your eyes to the banner and pick out a different headline. But if football teams that thoroughly and unfailingly embarrass themselves delight you as much as going 7-9 delights Jeff Fisher, or if your team is so terrible that you came in search of a hefty dose of schadenfreude, you're in the right place. We'll be breaking down the worst NFL teams since the league merged with the AFL in 1970. So fasten that chinstrap and prepare yourself to remember the quarterbacks you otherwise would have forgotten forever.

The recipe for disaster? Six starts for Chad Henne and 10 for Blaine Gabbert. The 2-14 Jags rushed for just five touchdowns all year and surrendered 19 on the ground, the second-most in the NFL. But they were better than they appeared, beating the 11-5 Colts and losing in overtime three times.

This squad featured three different starting quarterbacks — Charlie Batch (pictured), Ty Detmer, and Mike McMahon — and it showed. They were shut out twice, and appeared doomed to finish the season without a win before a 2-2 finish landed them at 2-14. No Lion rushed for more than three touchdowns.

Opposing quarterbacks sure felt comfortable against the 2011 Colts, completing a ridiculous 71.2 percent of their passes and tossing 25 touchdowns to just eight interceptions. The 2-14 team's quarterback situation, however, was messy. Neck surgery knocked Peyton Manning out for the season, leaving the task to Curtis Painter (pictured, with Manning), Dan Orlovsky, and Kerry Collins.

Seven players, including Tyler Thigpen (pictured) and three non-quarterbacks, ended up throwing passes for this anemic offense, averaging fewer than 200 yards through the air per game. The defense of this 2-14 squad was somehow worse, surrendering 6,291 yards, the second-highest mark in the league.

Here's a real rarity for teams on this list: These Rams actually put together a winning streak, claiming victory over the Washington Redskins and Dallas Cowboys in consecutive weeks for a 2-4 start. Led by quarterback Mark Bulger, the Rams finished the year with a 10-game losing streak. They're one of three Rams squads from a four-year span to achieve the dishonor of being on our list.

The 2004 49ers, with Tim Rattay (pictured) and Ken Dorsey making nine and seven starts at quarterback, respectively, finished 2-14, but they were dangerously close to going winless for the year. Both wins came in overtime, and both came against the division rival Cardinals, who went 6-8 in games not against this dumpster fire of a 49ers team.

These Titans kicked off the year on a high note, crushing a Kansas City Chiefs squad that'd finish the year 9-7. Unfortunately, the three-headed quarterback monster of Jake Locker, Charlie Whitehurst, and Zach Mettenberger (pictured) couldn't keep the momentum up, winning just one more time before the season's end.

This year's Raiders actually had a solid defense, ranking third in yards against and holding opposing passers to 17 touchdowns and 18 interceptions. Too bad offense is a thing that exists. Theirs — featuring eight starts apiece for Aaron Brooks and Andrew Walter under center — was abysmal, totaling just seven passing touchdowns and 24 interceptions in a 2-14 campaign despite the presence of a washed-up Randy Moss (pictured).

These Dolphins were so very close to going winless for the year, saved only by a 64-yard touchdown pass from Cleo Lemon to Greg Camarillo in overtime of their Week 15 tilt with the Baltimore Ravens. The presence of Jason Taylor (pictured) didn't help the defense much, as the Fins surrendered more points per possession (2.33) and total rushing yards (2,456) than any other team in the NFL.

The 2016 Browns had a chance to end their year on a high note, but let it slip away in overtime of Week 17. Having claimed their lone victory a week earlier, Cleveland took a lead in the extra period on a field goal, only to let the Landry Jones-helmed Pittsburgh Steelers offense respond with a 75-yard, game-winning touchdown drive.

The offense, led by Chris Weinke (pictured), finished 28th out of 31 teams in passing yards despite the 10th-most attempts. The 1-15 squad also finished dead last in yards allowed and 30th in yards gained. The D was particularly putrid on the ground, giving up a league-worst 2,301 rushing yards.

At 2-14, the 2010 Panthers had twice as many wins as the franchise's 2001 squad that's already appeared on this list, but they were somehow worse thanks to a miraculously ineffective offense. The Panthers finished dead last in points, yards, first downs, passing yards, and passing touchdowns. Matt Moore (pictured) and the four other QBs to take snaps threw just nine TDs and 21 interceptions, getting outscored 408-196 for the year.

The last straw for Steve Spagnuolo's tenure as the head coach in St. Louis, the 2011 Rams were held to one or zero scores in an astonishing six games, putting more than 16 points on the board just three times. Rams passers, including QBs Sam Bradford, Kellen Clemens (pictured), and A.J. Feeley, completed just 53.2 percent of passes.

NFL history buffs might be shocked to find the winless 2017 Browns so early on this list, as there are still three one-win teams waiting to be put out of their misery. But Cleveland wasn't as bad as their record suggests, ranking 14th in the league in yards against. Their biggest weakness: turnovers. The Browns gave the ball up 41 times and had just 13 takeaways of their own.

Their point differential is so bad it's almost impressive, scoring a league-worst 181 points and surrendering 446. The 1990 Pats allowed 33 or more points on seven occasions en route to a 1-15 record, giving up 29 rushing touchdowns and scoring just four of their own.

The third Rams team from a four-year span on this list, and the first of the dreary Steve Spagnuolo (pictured) years, the 2009 Rams went 1-15 by scoring 175 points and surrendering 436. Rams passers threw 12 touchdowns and 21 interceptions, and one of those scores came courtesy of kicker Josh Brown.

A surefire way to win a game and still be considered worse than a winless team: setting a record for the fewest points in a 16-game season, with 143. Jeff George (pictured) started all 16 games at quarterback, throwing for 2,910 yards, 10 touchdowns, and 12 interceptions, and getting sacked 56 times.

The offense, helmed at different times by Jon Kitna (pictured), Daunte Culpepper, and Dan Orlovsky, wasn't great — scoring 268 points, good for 27th out of 32 teams — but it wasn't the problem. The defense of the 0-16 Lions gave up 516 points, just 17 off the all-time record, and surrendered 31 or more points an insane 11 games. Their 292 points surrendered at home, however, is a record.

Here's all you need to know about how terrible the winless 1976 Bucs were: After all these years, the expansion team holds the record for the worst point differential ever, at -287 (outscored 412 to 125), even though NFL teams were still playing just 14 games per regular season.